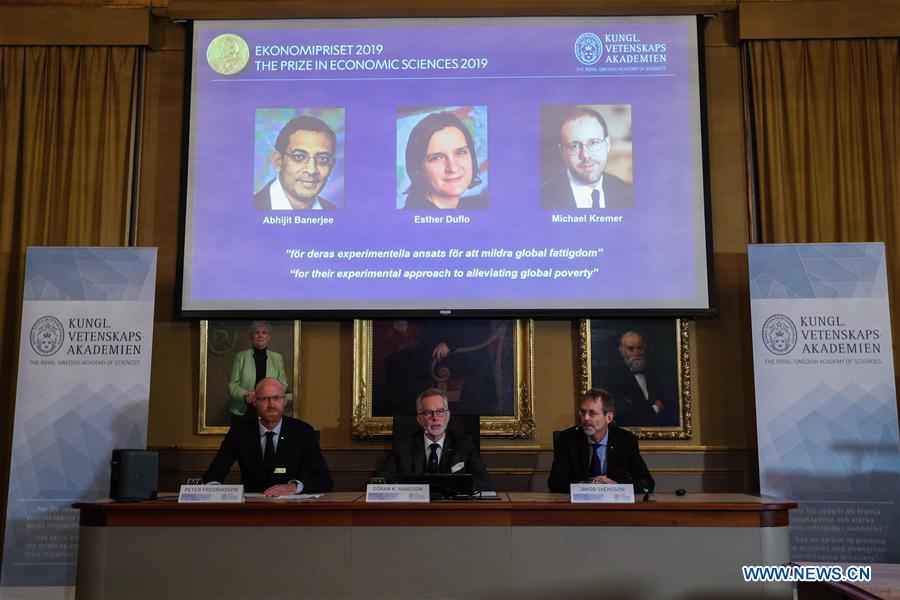 Abhijit Banerjee, Esther Duflo and Michael Kremer won this year's Nobel Prize for economics for their experimental approach to alleviating global poverty. The first two are professors at the Massachusetts Institute of Technology, and the third a Harvard University professor.

They were awarded the prize for their experimental research methods to identify effective policy interventions to fight poverty through field studies.

"Our goal is to ensure the fight against poverty is based on scientific evidence," Duflo told a press conference. "Often the poor get reduced to caricatures and even those trying to help them do not understand the deep roots of what is making them poor.. . We try to address problems as scientifically as possible."

The Nobel committee said this approach had "completely reshaped" development economics, with a clear impact on poverty and great potential to further improve the lives of the worst-off around the world.

It cited their work on the "learning crisis" which found that without better and more tailored teaching, new textbooks would not help children to learn more.

Kremer ran field studies in Kenya from the mid-1990s, while Banerjee and Ms. Duflo conducted similar trials in two Indian cities, Mumbai and Vadodara. Such field experiments have now become the standard method for development economists, the Nobel Committee noted.

The approach mirrors that used for clinical trials for new drugs; but as well as testing whether a certain intervention works, they have also investigated why it did so, using contract theory and behavioral economics to better understand people's decisions.

Having the prize awarded to development economists studying the problems of the poor and why they remain in poverty, is good news. It represents a move away from awarding the economics prize to neoclassical mainstream economists, often from the University of Chicago, who have never done empirical, let alone experimental work.

These winners are economists who have "got their hands dirty" in fieldwork and know the issues facing the poor first hand.

Alan Kremer started the use of randomized trials to evaluate interventions in the social sciences. He created an economic theory about skill complementarities called Kremer's O-Ring Theory of Economic Development.

This argues that workers with similar skills who work together will deliver higher productivity even if the technology is the same. He also proposed convincing explanations for the phenomenon of population growth prior to the early 1970s. He showed that contrary to the Malthusian theory, high population spurs technological change and thus accelerates economic growth. From this work, Kremer has promoted various market incentives to encourage the development of vaccines for use in developing countries.

Duflo is a French economist and her research has focused on microeconomic issues in developing countries, including household behavior, education, access to finance, health, and policy evaluation. In 2003, she co-founded the Poverty Action Lab at MIT, which has conducted over 200 empirical development experiments and trains development practitioners to carry out controlled trials.

She co-authored "Poor Economics: A Radical Rethinking of the Way to Fight Global Poverty (2011)" with Banerjee. Their book claims to outline a middle ground between "purely market-based solutions" to global poverty, and "grand development plans."

They advocate observation, using "rigorous randomized controlled testing" on five continents, and listening to what the poor have to say. In this way, the authors believe, effective strategies for eradicating poverty can emerge, and small changes can have big effects.

Duflo, Banerjee and Kremer represent an approach in economics based on evidence and field surveys. That can only be good. However, theory must also be relevant and the big picture cannot be replaced by micro studies.

After all China's record-breaking achievements in poverty alleviation over the past few decades have been driven by national plans. In 2017, in the Richard Ely ASSA lecture, Esther Duflo reckoned economists should give up on the "big ideas" and instead just solve problems like plumbers do: "lay the pipes and fix the leaks."

Yet, surely it is important to ask if the plumbing is designed properly in the first place? If not, far from fixing leaks, this approach may be like trying to stop a flood with a spoon.

Heiko Khoo is a columnist with China.org.cn. He is also a London based Marxist economist. He published the "The Great Recession" in 2008 and "Essays on Inequality" in 2014.