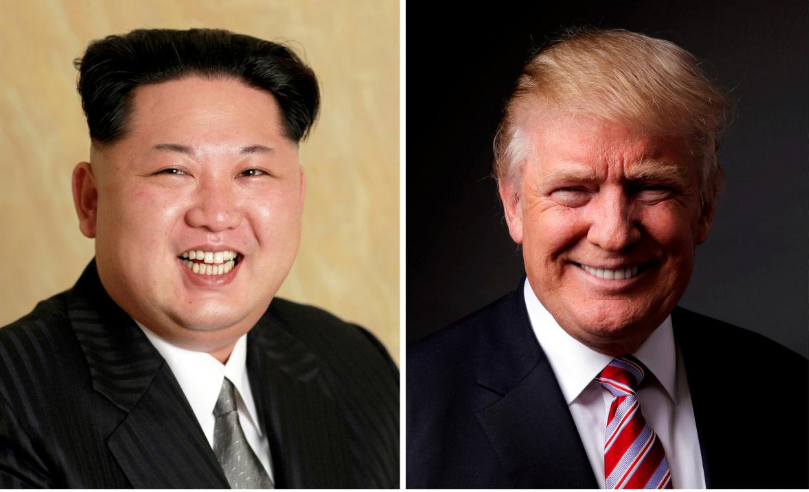 FILE PHOTO - A combination photo shows a Korean Central News Agency (KCNA) handout of Kim Jong Un released on May 10, 2016, and Donald Trump posing for a photo in New York City, US, May 17, 2016. (Photo: Reuters)

US President Donald Trump on Thursday tweeted with pride he will meet with North Korean leader Kim Jong-un in Singapore on June 12, and that they "will both try to make it a very special moment for World Peace."

Though the North Korean practice is to announce its leader's diplomatic activities afterward, the US has been feeding the world's curiosity with the meeting's venue, which is part of Washington's publicity campaign. Trump's political show has started far ahead of the meeting.

Picking Singapore as the venue should have been the result of Trump's insistence. The US declined options of a Chinese city or the demilitarized zone on the Korean Peninsula because Trump does not want his central role to be interrupted. Beijing's power may shift public attention from the meeting, and appearing in the DMZ would make Trump look like repeating what South Korean President Moon Jae-in did, meeting with Kim there.

As a major partner of the US in the Asia-Pacific region, Singapore will serve as Trump's host city.

For Pyongyang, Singapore will be the farthest place a North Korea leader will go since Moscow at the end of the Cold War. It takes courage and self-confidence for Kim to travel there and meet with Trump. Kim agreed on the choice of location, demonstrating North Korea's willingness to accept and observe international rules.

Trump has credited himself with the choice of Singapore, by which he wants to send the signal that "the US won the first round." It raises the US public's expectations for successful negotiations. However, it's also a burden to Trump, wherein Trump will try his best to achieve success, unlike what Washington has propagated that it will pull out of the dialogue if it feels Pyongyang lacks sincerity.

Such restraint by Trump is conducive to North Korea. Trump's patience and devotion to their meeting are what Pyongyang needs the most at this time.

No one believed Trump's announced aim for the meeting was practical, not even Americans. The White House demands a quick denuclearization of the Korean Peninsula, and said it would repay North Korea only after Pyongyang achieves irreversible denuclearization, before which it would maintain high pressure. North Korea said denuclearization should be conducted in steps and along with the US providing security assurances.

The White House is clear that denuclearization will not be promptly achieved. It will be a bitter pill to swallow for Trump if the talks break down, given that he has already exploited his presumed diplomatic success with Pyongyang. This will force him to take a more realistic attitude to the denuclearization process.

It is a common goal of the international community to denuclearize the Korean Peninsula for permanent peace. The US shares this objective, yet has its unique approach.

Trump's highest goal is to force North Korea to denuclearize immediately and to make his meeting with Kim an occasion to glorify his Korea policy. His lowest aim is to make sure the "success" of the meeting in the eyes of the US populace and boost his public image.

Once he meets Kim, there will be no turning back for Trump. If his Singapore trip produces no result or if the meeting is forced over by Pyongyang, all of Trump's previous glory will turn into a diplomatic rout and political disaster.

On the other hand, the pressure on Kim is much less, since for North Korea, any result from the negotiations is no worse than returning to the height of tensions seen last year.

Such a difference in nuance may put the Kim-Trump summit on a more equal footing for both sides, and they will negotiate in a more pragmatic manner.

It is in China's interest to realize peninsular denuclearization and permanent peace, and Chinese society also has both high and low expectations. The highest expectation is for North Korea and the US to reach a trustworthy and operable timetable and road map, while the least best is they will maintain improving the situation on the peninsula and push for the better, rather than making it snap and return to fierce antagonism.