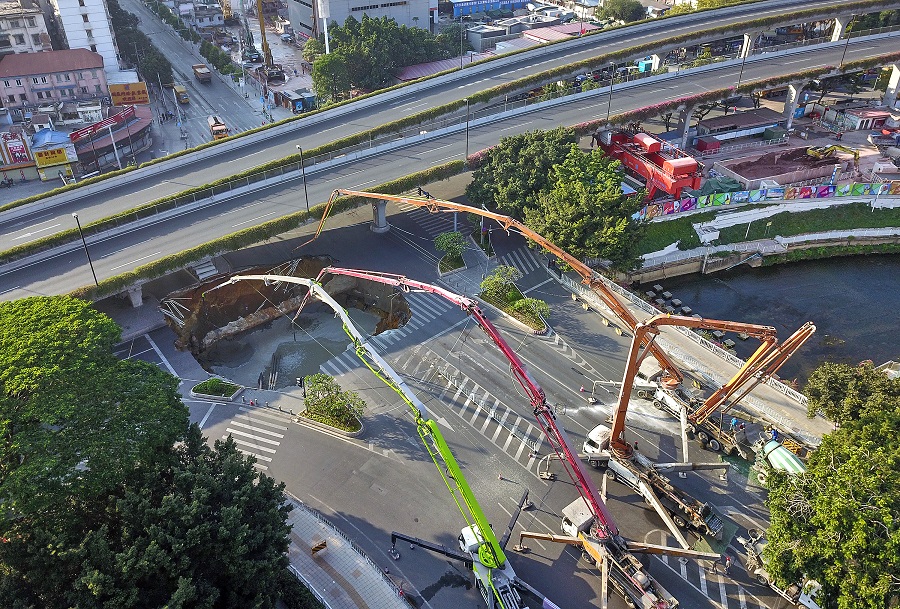 Cranes are deployed in Guangzhou, the capital of Guangdong province after a road collapsed near a construction site on Sunday morning. (Photo: CHINA DAILY)

A cleaning truck, an electric vehicle and their three occupants were swallowed by a sinkhole in the subway construction zone of Guangzhou, Guangdong province, on Sunday. The three missing people were identified on Wednesday. More than 1,100 rescuers and 192 emergency relief vehicles were pressed into the search operation.

The accident is a big tragedy for the missing people’s families. But the urban authorities should do more to draw a lesson from this and prevent such tragedies from happening again.

Although the authorities are still investigating the cause of the collapse — and despite the unpredictable occurrence of sinkholes — relevant government departments need to take more measures to prevent such incidents.

Unfortunately, the sudden collapse of the land surface is not uncommon in Chinese cities. According to the China Geological Survey, 122 land surface collapses and seven land subsidence occurred in the country in 2018. The land surface collapse in Foshan, Guangdong, on Feb 7 last year killed 11 people and left eight people injured and one missing, causing a direct economic loss of 532 million yuan ($75.6 million).

But China is not the only country where sinkholes and collapses occur. Sinkholes are found worldwide. In November 2016, a large sinkhole, 30 meters wide and 15 meters deep, appeared in the Japanese city of Fukuoka. Fortunately, no one was killed.

Given the suddenness and unpredictability of sinkholes and land surface collapses, and the fatality rate, a land depression can easily create panic among the people. Studies show that most man-made land surface collapses and subsidence are caused by breaks in water mains or sewer collapses when pipes give way, construction projects, mainly subway stations, or over-pumping of groundwater or surface fluids. And many of those depressions could have been prevented had all relevant parties taken enough care and precaution while carrying out their tasks.

Since the authorities can no longer afford to ignore the random land surface collapses in the country, they should pay closer attention to infrastructure safety including the underground water mains, sewers, and road surface. Measures should also be taken to ensure construction sites and factories do not over-draw water from the groundwater water table

In particular, construction companies should conduct a thorough geological study and have a risk-control mechanism and a professional and scientifically sound management team in place before starting a project.

The problem is that, except for a few provinces and cities such as Shenzhen and Chongqing, no province or region has a government department that specializes in minimizing the risks of land subsidence in cities. Given that the land, city management, and air defense departments are all involved in managing underground facilities, a permanent leading group or an agency specializing in prevention and management of land surface collapse should be set up to lead and coordinate all relevant works.

Moreover, to offset the lack of monitoring personnel, the public should be encouraged to help monitor the changes in the land surface, as usually cracks appear on a road or a sudden surge of water is noticed before the land surface caves in. And safety instructions should be more robustly disseminated among the people so they can protect themselves in case of land surface collapses. After all, safety is the best policy.