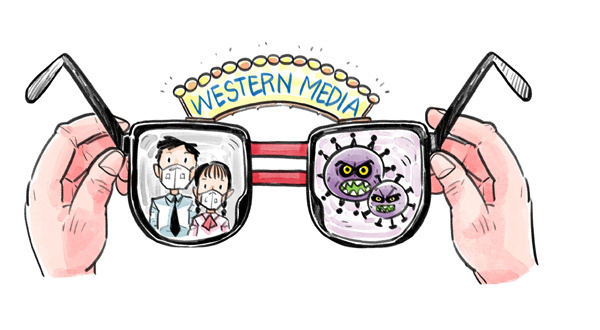 This year began with the shocking news of the novel coronavirus outbreak in China. Yet what worries me more is the rapid spread of the virus across the world. As of Thursday, more than 160 countries and regions outside China were hit by the pandemic, accounting for more than 110,000 confirmed cases and over 6,000 deaths. On March 11, World Health Organization Director-General Tedros Adhanom Ghebreyesus announced that the COVID-19 outbreak "can be characterized as a pandemic", saying he is "deeply concerned both by the alarming levels of spread and severity, as well as by the alarming levels of inaction (of some countries)".

Bruce Aylward, head of the WHO-China Joint Mission on COVID-19, recently said: "Now that cases (outside China) are picking up, my phone is ringing much more. People are saying: how did China do that? What did they do exactly? What can we do?"

The answer is simple: China's measures to contain the outbreak can be replicated, but it will require speed, money, imagination and political courage.

Since the outbreak in Wuhan, capital of Hubei province, the Chinese government has been decisive and resolute in taking the most stringent and comprehensive measures to curb the spread of the virus. It has taken a series of measures, fulfilling its responsibilities as a major country thanks to the professionalism and commitment of its medical workers, and the resilience and self-discipline of the Chinese people.

These measures include the quick and decisive lockdown of Wuhan, the epicenter of the epidemic in China, construction of makeshift hospitals in two weeks, nationwide coordination and dispatch of resources to Hubei province as well as monitoring of residential communities in other provinces and municipalities in accordance with their real situations. No wonder a report issued by the WHO-China Joint Mission on COVID-19 on Feb 24 said that, in combating the virus, China has adopted "the most ambitious, agile and aggressive measures ever taken in history, probably preventing at least tens of thousands, even hundreds of thousands of cases, making itself the solid front line in defending mankind against this virus".

China has paid a huge price as a consequence of this, as it has suffered huge losses in terms of both human and material resources to ensure the rest of the world doesn't suffer a bigger loss and greater damage. Aylward, touched by the Chinese people's sacrifice, said, "to the people of Wuhan, it is recognized that the world is in your debt".

But while China is busy combating the virus, some unkind and discordant noises are coming from abroad. Some are playing the old game of naming and shaming China. Some Western politicians and media outlets have called the novel coronavirus the "Chinese virus" or "Wuhan pneumonia". And some biased US politicians have even cooked up a fancy story that the novel coronavirus is the biochemical weapon leaked from a laboratory in Wuhan, while The Wall Street Journal recently carried a report with the grossly racist headline, "China is Real Sick Man of Asia". Besides, German newspaper Der Spiegel had a cover story titled "Coronavirus, Made in China", and an American TV host claimed that since "the coronavirus originated from China", China should say sorry to the rest of the world.

Michael J. Rhan, executive director of WHO Health Emergencies Programme, pointed out that, "coronaviruses are a global phenomenon; they exist on a global basis. It's an unlucky accident of history or nature that they emerge in a certain place and it's really important that we don't start to ascribe blame to geographic origin and that we look at this in terms of how we respond, how we contain and how we stop this virus".

And Zhong Nanshan, an expert in respiratory diseases with the Chinese Academy of Engineering, said the fact that the epidemic broke out in China does not necessarily mean that it originated in China. No matter where this virus came from, China, like other affected countries, is also a victim of the pandemic, and is facing the same unprecedented challenge of fighting the disease.

A group of 27 prominent public health scientists from different countries, including Lam Sai Kit, a renowned public health expert from Malaysia, have signed a statement strongly condemning conspiracy theories that suggest the novel coronavirus does not have a natural origin, making those who have invented such conspiracy theories a laughing stock for the world. Some media outlets have pointed out that the H1N1 flu outbreak started in the United States in 2009, and then spread to more than 214 countries and regions claiming thousands of lives. Should these countries and people ask the US to apologize for that?

Only the degenerates can take pleasure in China's misfortune. Some foreign media outlets, turning a blind eye to China's strenuous efforts and great sacrifices, have kept making disparaging remarks against China. Their use of apparently racist terms against China has aroused indignation among not only the Chinese people but also many people across the world.

Worse, some Western politicians, obsessed with the ossified political logic of "opposing whatever China does", keep pointing fingers at China even at this critical moment of the global fight against the pandemic. Interestingly, China was criticized for being clumsy and inefficient before the lockdown of Wuhan, and accused of violating human rights after the lockdown. In their world, China is wrong in everything it does.

Compared with the dreadful virus, the pride, prejudice and hatred, hidden deep in some people's minds, are more vicious than the novel coronavirus. As Philippine Foreign Minister Teodoro Locsin said, "We must deplore the lies spread by governments and people who are stooping so low as to use a threat against all humanity as an instrument of geopolitical strategy. Shame on them."

The pandemic is like a magic mirror, which tells true friends from false ones. What touched me most is the sincere concern and generous support given by people from different social circles of different countries. They have provided valuable and timely support in various forms to China, which the Chinese people will always remember and be grateful for.

In Malaysia, the government, social organizations and individuals have offered a helping hand to China and the Chinese people. Some have donated materials and money, while others have composed songs and made videos to boost the Chinese people's morale. The donation can be valued, yet the friendship it denotes is invaluable. Every call of "China, stay strong", every piece of aid coming from our Malaysian friends is a manifestation of true love and friendship, with the same spirit of the Malay idiom I like most: Bukit sama didaki, lurah sama dituruni－which means to go through times, both good and bad, together.

There is a Chinese saying, "You spare a peach to me, I give you a white jade for friendship." This is exactly how Chinese treat friends. The Chinese people cherish friendship, appreciate kindness, and always remember the help and support they receive from others, especially in times of difficulties. China will continue to fight against the pandemic with perseverance and resolution, making its due contribution to the global fight against the novel coronavirus.

Now, China is sharing its experiences and the lessons it, along with WHO and other countries, has learned in the fight against the epidemic, including the medical treatment and measures to curb the spread of the virus.

China has also sent expert teams, medicines and medical protective gear, and reagent test kits to the most severely hit countries such as Iran, the Republic of Korea and Italy. Having the best knowledge of combating the epidemic, China has no hesitation in shouldering its responsibility as the backbone of the global coalition in the fight against the pandemic.

The author is China's ambassador to Malaysia. The views don't necessarily represent those of China Daily.