The Brexit dilemma has offered us a good opportunity to observe the Western political system. A referendum is always regarded by some Western politicians as one of the most important ways to gauge public opinion. In their view, as long as the voting procedure is correct, the result will be accurate. Brexit is a product of the ballot, but it has led the country into a swamp. 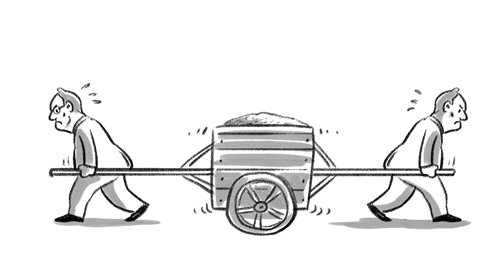 There are serious differences over Brexit within the two major political parties - the Conservative Party and the Labour Party. In June 2016, British Prime Minister David Cameron decided to solve the problem through a referendum.

People may have forgotten the proportion of votes cast in the Brexit referendum. This is the deceptive nature of a ballot politics, which has put Britain on the horns of a dilemma.

The ballot is the foundation of the Western democratic system. Any major political decision that cannot be agreed on can be decided by a vote. Everything must be determined by the number of votes even if the leader knows it will not solve the problem and sow more confusion, even leading to a dead-end, yet he or she must follow the course set by the ballot.

Voting politics legitimizes politicians, but also limits the space for the right decision.

Thus, the government is constrained by votes and is likely to become irresponsible and inefficient.

Thirteen million voters - certainly not a small number - did not cast their ballot. For whatever reason at least, they felt that it was not so important, or did not know which choice they preferred. But they were part of the Brexit process together with those who supported or opposed it. The fate of this old empire was thus determined by a minority of its population. Even if savvy and intelligent British leaders knew that the aim of the referendum was defeated or it was not in the interest of the nation and its people as a whole, they had to follow the path, which probably led to nowhere. All state machinery was directed in that direction. Is this democracy or perversion of democracy? Perhaps, the procedure is democratic, but the result is not. The entire country was hijacked in the name of a referendum.

Those who voted would not have thought that trade with EU member states might stop, foreign exchange rules and trading would change, airlines might be suspended, ports might be closed, food and medicine would be short... they were only concerned with the procedure. Now, when the UK is on the edge of a cliff, it feels the heat and believes that Brexit will derail normal life. They probably never thought that the vaunted process would bring the country to this denouement. Some of them made the choice just because they do not like or even hate globalization. To take such a crucial decision on the basis of a referendum is farcical.

It is only now they suddenly realize that Brexit is so complicated and resistance to globalization will exact its price. Anyway, democracy is not an easy game. They exercised the right of democracy and must face the result.

Brexit has put British political parties on a collision course. As for whether Brexit is right or wrong, good or bad for the country, beneficial or harmful to the people, is no longer critical. What is important is that both sides must fight each other until the last bullet is fired.

In the past, politics of the ballot lent an edge to the British Empire, but today, it has pushed the country into chaos.

A plebiscite or referendum is a legitimate way of taking decisions in Western liberal democracies, but a flawless procedure does not imply a perfect result. Western scholars used to observing the political mechanisms of developing countries through the procedure don't pay much attention to the outcome, which leads to them attaching importance to the process but disdain for the development strides taken by other countries. Misunderstanding China starts from here.