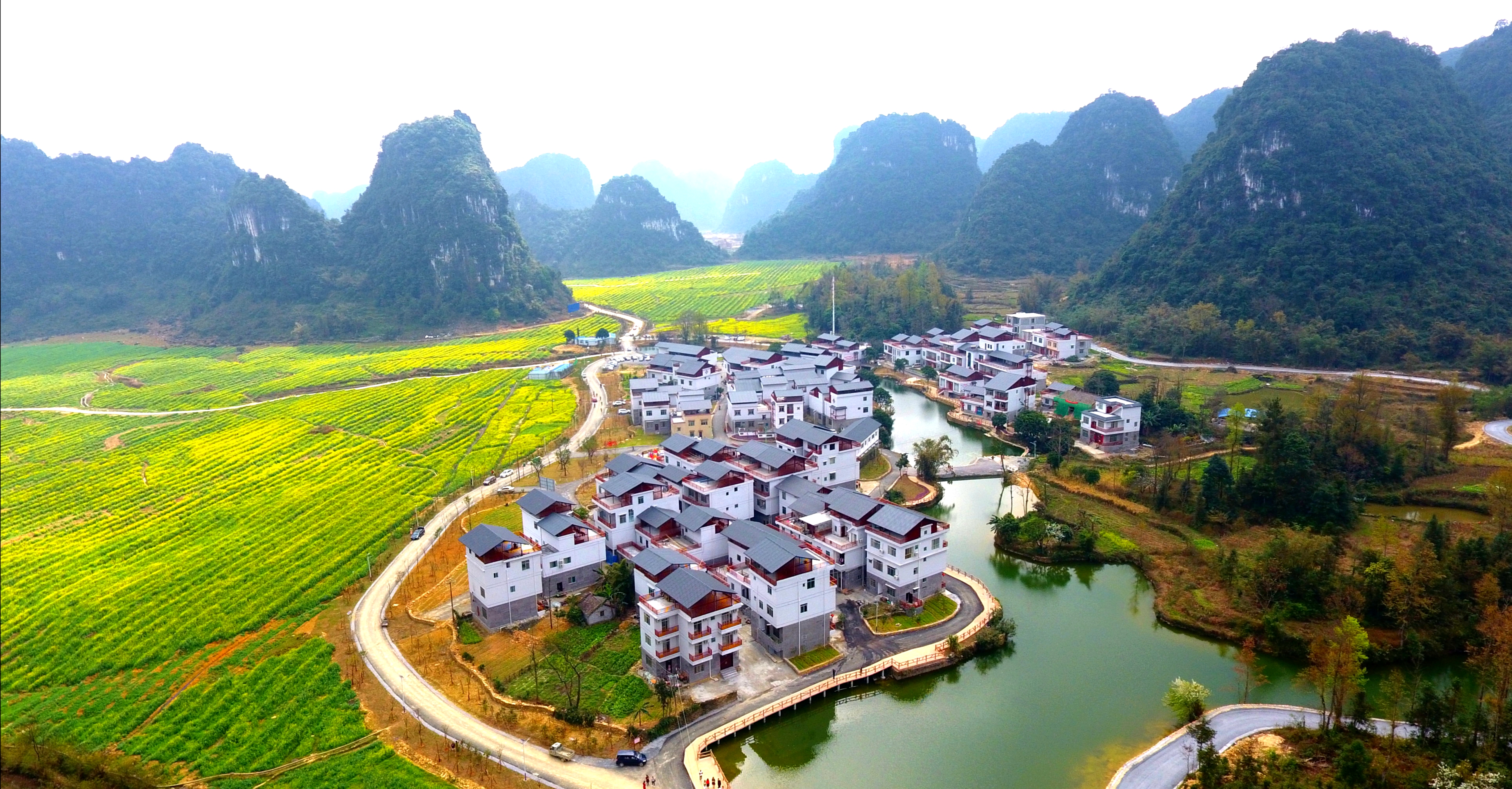 An aerial view of a village in Baise of the Guangxi Zhuang autonomous region in early 2019 showcasing improved housing and agricultural production amid rising standards of living in the area. (Photo: China Daily)

For Nico Hansen, a 60-year-old retired Luxembourg policeman, a sightseeing trip to Hechi city in South China's Guangxi Zhuang autonomous region in 2015 was a life-changing experience.

Hansen said he was overwhelmed then by the unique karst landscape－and shocked by the poverty in some of its rural areas.

When a number of villages recruited volunteers amid local residents' fight against poverty, the retiree decided to stay in the city to lend a helping hand.

Over the years, he went back-and-forth from downtown Hechi where he lived to the rural places he wanted to help.

In order to stay in Hechi, Hansen had to apply for a tourist visa several times.

"The first time I came to Zhadong village, I was impressed by its natural beauty. The mud houses fit perfectly with the green environment," he said.

"But when we entered the houses, we found that people were so poor. There was a fireplace, a table and some chairs. No bathroom. Tap water and electricity were the only things to remind me that they were living in the second millennium."

Hansen volunteered to help plant passion fruit vines in Zhadong because many young villagers had left for towns and cities to find work. Hansen bought the village a grass cutter, a driller and a hydraulic hammer to build passion fruit trellises.

The village had no major links to the rest of the world. The locals were soon moved by Hansen's sincerity and became his friends. He became more involved in their work and lives.

"People in the village used to have an annual income of 2,000 yuan ($303) from growing corn and beans. By growing passion fruit, some villagers are earning 5,000 yuan a year," he said.

In 2018 the villagers, supported by local authorities and businesses, started laying out roads. When the vital transportation links were completed two years later, the villagers began to sell their produce to the outside world. People from other parts of Guangxi and the country also started visiting the scenic village, which tapped agrotourism as a new income source for the farmers.

"I've seen changes in the village in the past two years, with the mud houses being turned into brick ones and dirt roads becoming concrete ones," Hansen said.

"I never thought that I would take part in such meaningful work."

Like Hechi, other poverty-hit areas in Guangxi have also had support from the rest of China.

In 1996, when Chen Kaizhi was deputy mayor of Guangdong's provincial capital Guangzhou, he was assigned to help Baise city, one of the areas hit hardest by poverty.

During his first visit to Baise, Chen was shocked by how poor it was.

More than 600,000 people lived in extreme poverty and did not have enough to eat. Major transportation networks were unavailable to 1 million of the 3.57 million people living deep in the mountains. About 36,000 teenagers could not afford to go to school and stayed at home, while 800,000 residents lacked drinking water and had to collect rainwater to get by.

"I almost cried when I saw how two children with high fevers had to stay in their thatched cottage because they could not afford to see doctors," Chen said.

Baise, which borders Vietnam, is officially designated as one of China's 14 areas in extreme poverty. Nine of its 12 counties are below the poverty line, according to national standards.

In 1996, at a national poverty-alleviation conference, Chinese policymakers adopted a strategy that paired developed areas with underdeveloped ones to help the needy.

Guangdong was selected to assist Guangxi, which is a main battlefield of the country's poverty alleviation drive. Guangzhou worked with Baise under the arrangement.

But Chen's primary concern was educating the children in Baise.

"Knowledge is the key to changing a person's life. If we had solved only Baise's bread-and-butter issues, we would have failed to address the root of the matter," he said. Chen placed education at the top of Baise's poverty-alleviation agenda and raised 300 million yuan to build and improve 242 primary and middle schools as well as preschool facilities.

In 2012, Chen proposed establishing a Baise education fund and served as its honorary chairman. He took the lead in donating to the fund every year. So far, it has raised 260 million yuan, sponsored 52,000 students from impoverished families and awarded 6,200 outstanding teachers in mountainous areas.

Cheng Wanting, who was born in a poor family in Baise, enrolled in the high school Chen funded and completed university with his help.

"If not for his efforts, girls like me wouldn't get the chance to be educated," Cheng said.

She later became a teacher in the city to help students in need.

Chen retired from his position as chairman of the Guangzhou people's political consultative conference in 2005 and has since spent most of his time helping Guangxi.

On his 107th trip to the region in April 2019, Chen fell in the hotel where he was staying and cracked a part of his cervical vertebrae. He continued his mission after he recovered.

"Although China is set to meet its goal of eliminating extreme poverty by the end of 2020, that doesn't mean we can cease our work to improve people's livelihoods since poverty can return at any time for any reason," Chen said.

In 2012, President Xi Jinping, who is also general secretary of the Communist Party of China Central Committee, praised Chen's efforts in Guangxi during a visit to Guangdong.

Xi pointed to how Chen, as a Party member, continued to dedicate himself to poverty alleviation, even after retirement.

"I will fight poverty until the last few minutes of my life," said Chen, who now serves as vice-president of the China Foundation for Poverty Alleviation.

Baise, a revolutionary base where a Party-led uprising took place in 1929, is one of the places that Xi cares about and has visited on fact-finding trips. 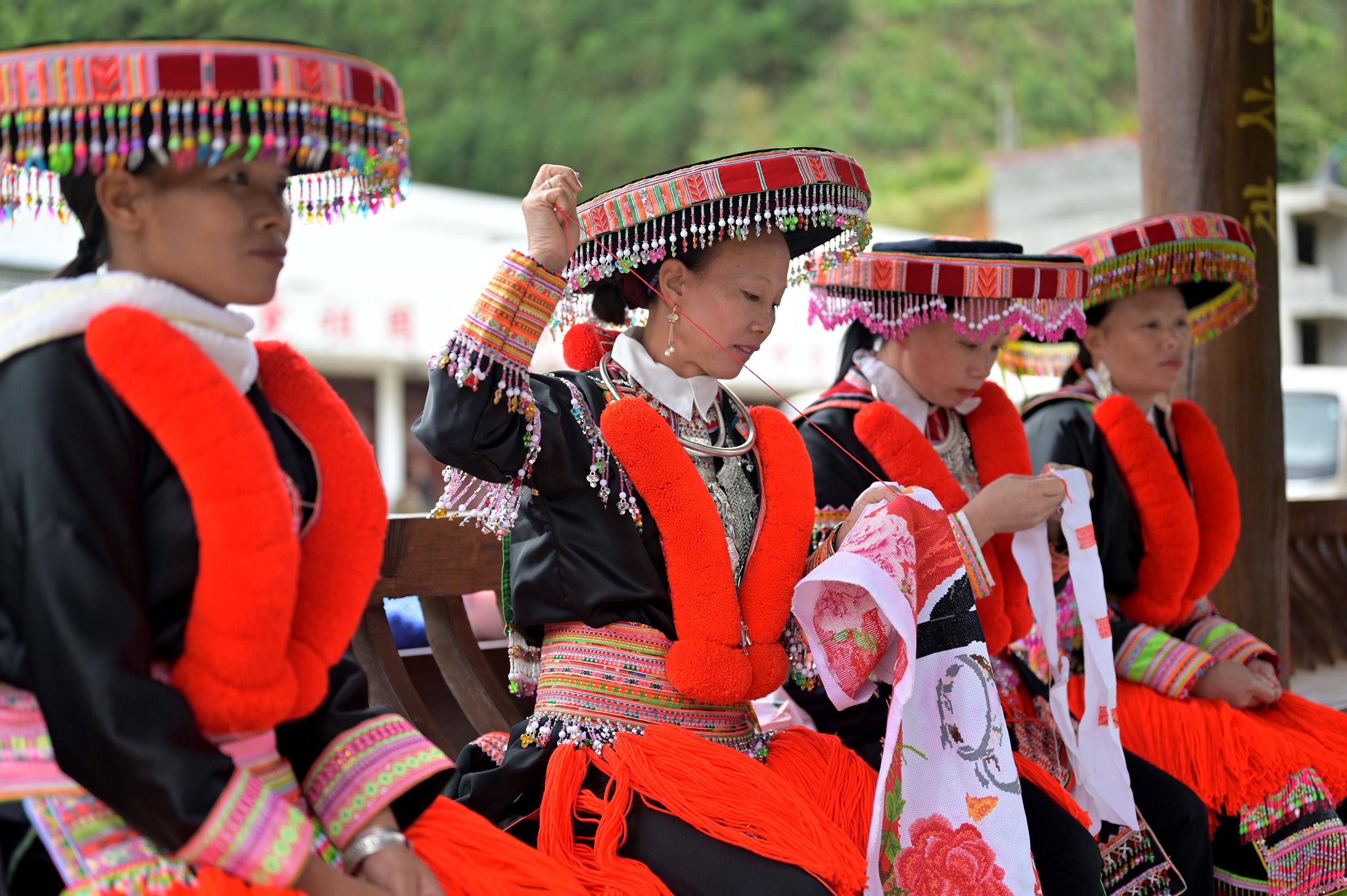 Women of the Yao ethnic group work at their embroidery in a new housing area in Dabing village of Napo county in Baise. ( Photo:China News Service)

When Xi was China's vice-president in 2010, he visited Xinli village in Baise's Tianyang district to learn about local people's lives.

Farmers there previously had to plant corn in cracks between rocks due to shortages of water and quality soil.

Xi visited Ma Zhenggui's ramshackle house. Ma earned 2,000 yuan a year from growing sugarcane and had to apply for a loan to send his son to vocational school.

"My family worked hard to make ends meet then," the 51-year-old Ma said.

"Drinking water was insufficient. We had to collect and store rainwater."

Ma began growing more vegetables and fruits, including mangos, and now earns nearly 100,000 yuan a year. Tianyang district itself produces mangos and vegetables for the northern parts of the country in winter.

"We grow mangos from June to September and vegetables from October to May."

Most farmers in Tianyang have similarly improved their situations.

It is difficult to develop industry in Xinli because the barren mountainous area lacks convenient transportation and natural resources.

"Relocation seemed to be the only solution," said the village's Party secretary, Luo Chaoyang.

In 2013, Luo visited 11 places hit by extreme poverty to understand their situations.

"It took me four hours to walk from one place to another because the village was loosely connected by poor roads," Luo recalled.

Luo said he was upset at seeing unhappy children and elderly people on their own.

"If we can't help the villagers live better lives, all the village committee members should quit," he said.

Luo rolled up his sleeves and got to work. Xinli set up a construction management committee to mobilize villagers, raise funds, plan land use and relocate some farmers.

Xinli tapped 5 million yuan donated by Guangzhou to launch its relocation program, which helped 158 families living in poverty to move to their new houses a kilometer away.

The village has since undergone tremendous changes over the past decade.

There are more than 20 paved roads totaling 60 kilometers. Farmers' living conditions have also improved significantly. Their houses have been renovated and they enjoy access to running water.

Baise's Party committee secretary Peng Xiaochun said, "The development of Baise is a story of how the locals struggled to escape poverty and made remarkable achievements."

Peng said the government initiated poverty alleviation measures in 1985. In 2012, Baise was home to nearly 1.7 million people living below the poverty line, which was 2,000 yuan a year then. The number fell to 37,800 by the end of 2019. Rural infrastructure has greatly improved since 2016 thanks to new investments, he said.

Guangxi still has much to do to combat extreme poverty, as 240,000 residents remain poor, according to the autonomous region's poverty alleviation department.

"In the past four years, 4.5 million people have been lifted out of poverty with government support. But the remaining impoverished areas in Baise and Hechi are the hardest to tackle," the department's director Jiang Jiabai said.

On April 7, the State Council, China's Cabinet, gave Baise a special place in national development, when it approved the city's designation as a new pilot zone for advancing China's opening-up.

In a statement, the State Council said the pilot zone will accelerate the development and opening up of border areas. It will strengthen cooperation with members of the Association of Southeast Asian Nations, especially Vietnam; enhance infrastructure connectivity and industry; create a high-quality, open economic system in the border areas; and propel poverty alleviation and rural vitalization.

It will also boost the construction of the China-Indochina Peninsula Economic Corridor, according to the statement. The economic corridor, an important part of the Belt and Road Initiative, originates in Guangxi and neighboring Yunnan province and runs through six ASEAN countries－Vietnam, Laos, Cambodia, Thailand, Malaysia and Singapore.

"We are very excited to see that the provincial government is further rolling out a series of preferential policies to accelerate the opening up of the pilot zone," said Qin Weifeng, deputy director of the Baise publicity department.

"I believe it will be a historic opportunity for our people to change our fates and find the way to prosperity."