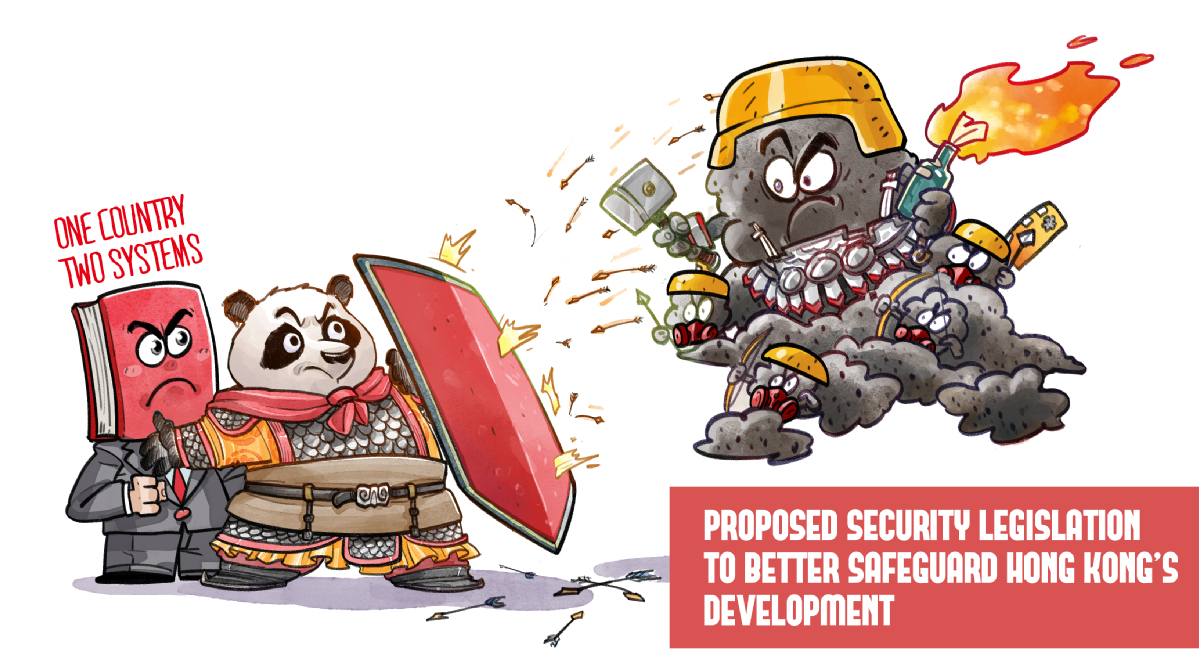 Reports that the National People's Congress, China's top legislature, will make a decision allowing its standing committee to make legislation strengthening national security in the Hong Kong Special Administrative Region have been like a testing kit for an anti-Beijing virus.

Those that find the news encouraging and comforting are invariably those who have the SAR's stability, prosperity and rule of law in their hearts, and those speaking ill of it mostly have an axe to grind when it comes to the Chinese mainland.

Given the seemingly unstoppable violence that has been inflicted upon the SAR, an inalienable part of China, and the rise of secessionism in the city — fanned by foreign powers through their barefaced intervention in the internal affairs of the Chinese city — it is absolutely necessary that the country's top legislature fulfill its obligation to guarantee national security, by strengthening the legal framework with regard to Hong Kong.

There is nothing untoward in this as all countries attach the utmost significance to national security, and the introduction of such a law will safeguard the long-term stability and prosperity of Hong Kong.

What has happened in Hong Kong since June last year indicates that the legal system in the SAR is not only weak with regard to national security — as its limited number of relevant articles are scattered among various laws and regulations, some of which date back to British rule and many of which have been left in a state of dormancy since then — but also frail in its law enforcement power which has been unable to quell the unrest.

Security and stability are the necessary foundation for development and prosperity.

Should the legislation be forthcoming, it will not only provide the necessary legal guarantee for the State to exercise its power to protect national security should the need arise, but will also be conducive to guaranteeing the SAR government has the ability to safeguard public order by helping it close the loopholes in its legal system and end its law enforcement disadvantages, which will better realize its autonomy rather than limit it.

The NPC's decision at its session in Beijing is timely, as the national security legislation incubated from it will not only respond to the outcry of Hong Kong people to put an end to the violence but will also be in line with the fundamental interests of the SAR, whose economy has been severely harmed by the upheaval.

The overreaction of those rioters and their foreign backers, who see such legislation as a thorn in their side, only testifies to the pertinence of the decision and the urgent need for such legislation, which will accelerate the construction and improvement of China's legal system regarding national security, and enhance the efficiency of the country's response to national security concerns. Thus it is an integral component of the country's overall efforts to modernize its governing capacity and system.

The introduction of the legislation will provide the legal basis for concrete actions to check the escalation of violence in the SAR, and act as a deterrent to expedite the restoration of public order.

When rolled out, those who challenge national security will necessarily be held accountable for their behavior, and with the backing of the State, the SAR will have sufficient means to make each word of the legislation count.

With the substantial backing up of its law enforcement by the State, the SAR government will be able to give much-needed attention to Hong Kong's long-term development.