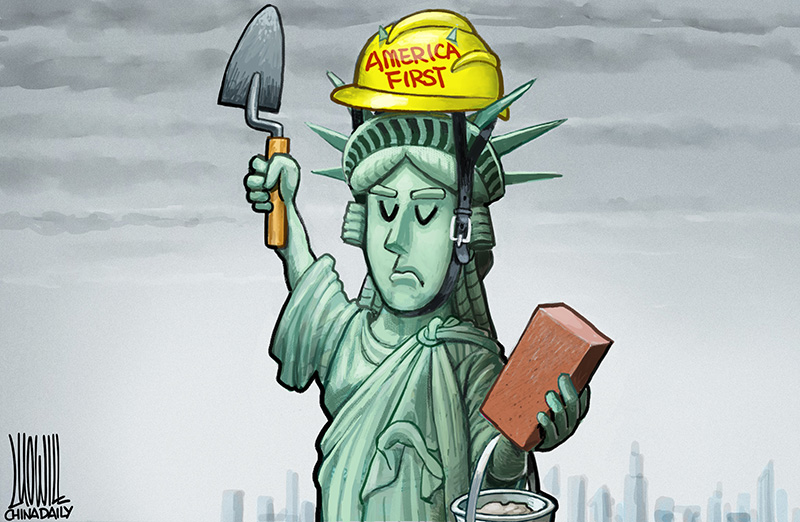 Having fallen prey to the manipulative maneuvers of the Donald Trump administration in its bid to present the United States as a victim of unfair trade practices, Chinese investment in the US declined significantly in the first five months of this year compared with the same period last year.

According to a report released on Tuesday by Rhodium Group, a research company that tracks Chinese foreign investment, it dropped by 92 percent to only $1.8 billion, its lowest level in seven years.

While Beijing tightened its oversight over outbound investment last year, it is the Trump administration's blitzkrieg on China’s trade and enterprises that is to blame for the decline in Chinese investment, since, overall, China's outbound investment in the first five months increased by 38.5 percent year-on-year, to reach $47.89 billion.

In the same way that it is prone to evoking "fair trade" as a justification for its protectionist tariffs, allegations of "national security risks" have become the go-to excuse for the Trump administration to scuttle acquisitions in the US by Chinese companies. Alibaba's Ant Financial’s $1.2 billion bid to take over MoneyGram and HNA Group's bid for Skybridge Capital, a hedge fund, were both derailed earlier this year due to regulatory vetoes by the Committee on Foreign Investment in the United States. And new legislation is in the works that will raise the regulatory hurdles still higher by expanding the scope of CFIUS scrutiny.

The approach that the US is taking is self-defeating. The woes the administration is inflicting on Chinese companies do not simply translate into boons for US enterprises and the US economy. The trade relationship between China and the US supports millions of jobs in the US, including those that Chinese companies have created directly through their US investments.

The fast-shrinking Chinese investment in the US reflects the damage being done to China-US trade relations — long considered the cornerstone of bilateral ties — by the trade crusade of Trump and his trade hawks.

Their desire to acquire is perhaps understandable, having promised so much, and giving the evangelical zeal they have for US ascendancy. However, times have changed, and what they are doing now is folly given the global value chains that were primarily forged by the US for its advantage.

The travails of the US economy have been the result of the costly wars the US has pursued and the damage done by the greed and dubious practices exposed by the subprime crisis.

The Rhodium report said that the new tariffs might incentivize Chinese manufacturers to localize production in the US to ‘"hop the tariff wall". But if Trump and his hawkish advisers were to look beyond the walls of their ideological fortress, they would realize the tariffs are not necessary as the US is not being besieged.