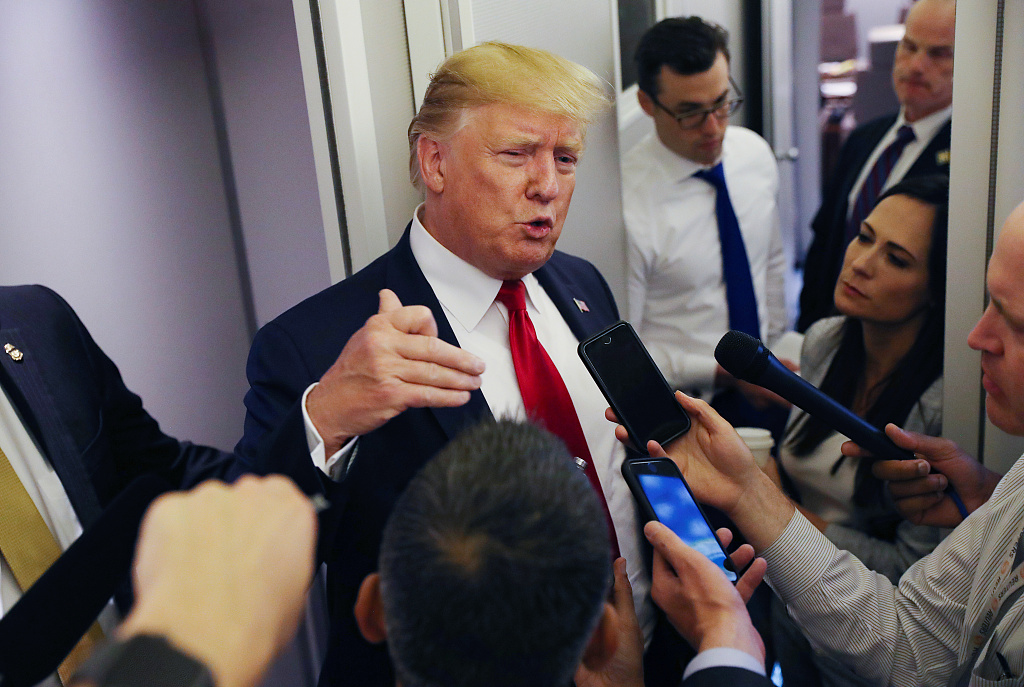 U.S. President Donald Trump speaks to the White House Press Corps on Air Force One while flying back to Joint Base Andrews, Maryland, after visiting the sites of recent mass shootings in El Paso and Dayton, U.S., August 7, 2019. (Photo: VCG)

After members of his own party blasted him following weekend hate-inspired mass shootings in Dayton, Ohio and El Paso, Texas, Trump issued his first-ever condemnation of white supremacy and extremist groups on Monday.

"In one voice, our nation must condemn racism, bigotry and white supremacy," Trump said. "These sinister ideologies must be defeated. Hate has no place in America."

After more than two-years of using hate rhetoric as a political tool, America's 45th president seemed to be back-peddling on Wednesday. Yet many pundits called it a hypocritical political gesture.

In a pre-killing diatribe, the El Paso murderer posted a statement that said the attack was "a response to the Hispanic invasion of Texas." The link between Trump administration hate rhetoric and mass killings in this regard are ironclad.

Right-wing hate groups have been on a rapid rise since Trump took office 30 months ago.

"There's some reluctance among agents to bring forth an investigation that targets what the president perceives as his base. It's a no-win situation for the FBI agent or supervisor," Gomez said.

In 2017, after a young college woman was crushed to death by a car driven by a white supremacist at a rally in Charlottesville, Trump said "there are good people on both sides," a reference that included the white hate mongers responsible for the murder.

Sunday's Ohio shooter had threatened women, according to his friends, and the man who murdered 22 people at an El Paso Walmart posted an anti-immigrant diatribe on an anonymous extremist message board, citing the Christchurch, New Zealand, mosque shooter who left 51 dead in March as an inspiration.

The Christchurch shooter left his mark on America's rampant rise of racism.

In April, a man who opened fire at a San Diego synagogue also posted a note online that was almost identical to one written by the Christchurch mass murderer.

The note -- full of anti-Semitic language and lauding white supremacy -- named the Christchurch killer and the man accused of fatally shooting 11 people inside a Pittsburgh synagogue as inspirations for the attack.

And, less than a week before the latest shootings, a 19-year-old man, suspected of killing three people at a Gilroy, California, food festival before killing himself left a note on Instagram instructing followers to read a 19th-century white nationalist book.

Those attacks followed six worshipers killed at a Sikh temple in Wisconsin in 2012; three people gunned down at Jewish community center in Kansas in 2013; and nine slain at a black church in South Carolina in 2015.

Extremist-related murders spiked 35 percent from 2017 to 2018," making them responsible for more deaths than in any year since 1995," according to the Anti-Defamation League (ADL).

"This is the Trump America -- crafted and brewed on hatred and deception -- engineered to distract the electorate from the half-baked incoherent policy he gurgles out each day," former Washington policy advisor David Richardson told Xinhua on Wednesday.

Meanwhile, white supremacist propaganda distribution nearly tripled from 2017 to 2018, according to the ADL, which also documented a rise in racist rallies and demonstrations.

According to the Southern Poverty Law Center, 2018 was also the fourth straight year of hate group growth, culminating in a 30 percent increase overall, "roughly coinciding" with President Donald Trump's campaign and presidency.

"It's the All-American insanity -- no other so industrialized nation on Earth shares our obscene gun death statistics -- you can thank amoral capitalism, the National Rifle Association (NRA), and American's distrust of their own government," said California businessman Glenn Nemhauser.

The NRA boasts having five million members and represents corporations and businesses involved in gun manufacture and trade. Founded in 1871, the NRA defends the antiquated and misinterpreted Second Amendment to the 1789 U.S. Constitution -- the "Right to Bear Arms."

Americans own a staggering 400 million guns, more than half the world's total. Roughly half of America's 340 million citizens own guns.

By Tuesday, he had caved into NRA opposition to assault weapon bans and red flag bills and turned his attention to internet control of gun violence and mental health.

"He couldn't care less about anybody killed by gun violence -- it's just another fake issue to fool America," Richardson said. "The American public has an incredible capacity to be deceived," he told Xinhua.

"This is a political manifesto of the nativist right," added former State Department official Stewart King. "It is notable because of the ensuing violence -- the analysis is not surprising or unusual."

New Zealand's response after the Christchurch tragedy was to ban guns.

"We look at America and see how ... people are duped and actually believe guns should not be abolished," said Bek Farnsworth, an Auckland New Zealand real estate agent.

"New Zealand won't put up with this, but America will. And they call themselves, 'free,'" he told Xinhua Wednesday. "They aren't free, they're shackled by bullets."

"What I am saying is that the Republican Party is complicit to obvious racist and immoral activity inside our party," added two-term Republican Nebraska state senator John McCollister.

"Shame on them and all the others who want the nation to be upset and fragmented, and divided by tragedy, just so that they can sooner get the political outcome they are hoping for," the White House posted on its website Wednesday.

"That's what they always do after a mass shooting -- first sympathies and condolences, then, 'this is not the time to talk about gun control,' and then, they start pointing the finger at liberals," Scarborough added.

Monday and Tuesday, lawmakers from both parties screamed for stricter gun control measures, including more extensive background checks and a ban on assault military style weapons.

Meanwhile, the rest of the world is not ignoring the increasing bloodshed across America.

On Tuesday, Venezuela and Uruguay warned their citizens about violence and hate crimes in the United States. More countries are expected to issue similar warnings.