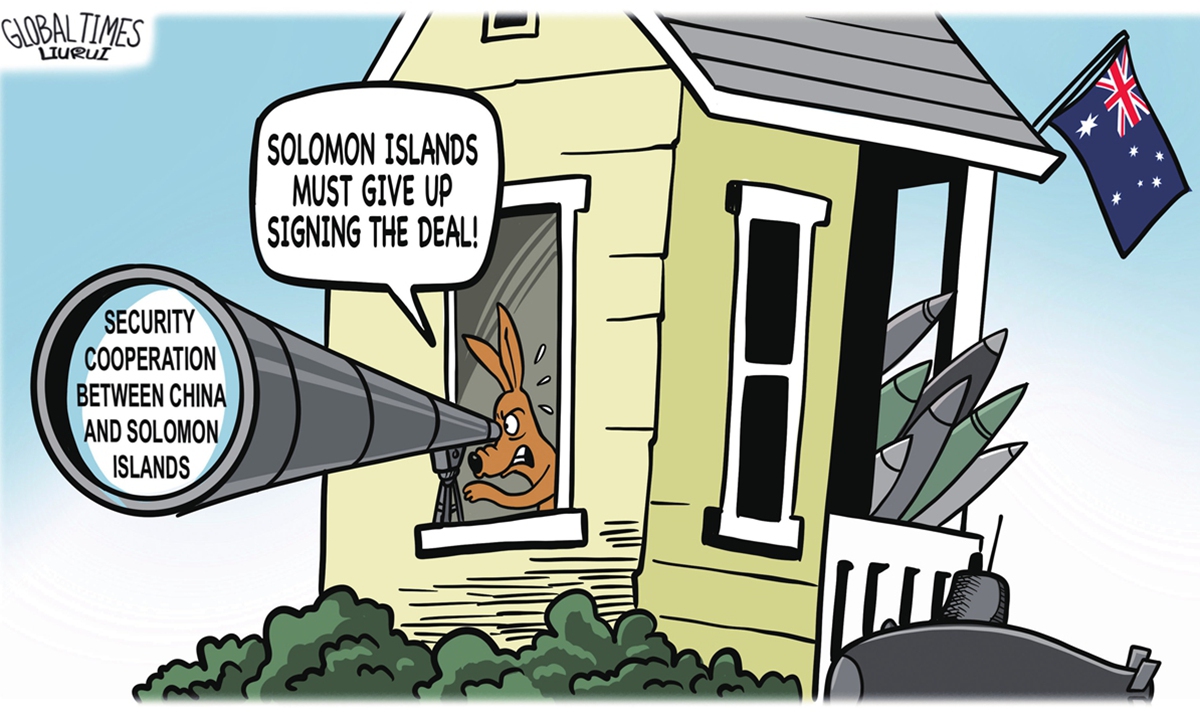 Australia is aghast at the news that China has signed a bilateral security agreement with the Solomon Islands. Despite both Canberra and Washington having sent scores of officials to the archipelago nation in a bid to try and coerce them to change course, the agreement was confirmed several days ago. The pact provoked a tidal wave of vitriol in the Australian press, with several commentaries and articles going as far as demanding outright regime change, or even invasion against the country.
Canberra makes it abundantly clear that it deems Solomon Islands to be its own "backyard" and connects its new tilt toward China with the repulsive "Yellow Peril" paranoia that has become endemic in recent years. But this only illustrates the hypocrisy, vulgarity and thinly veiled elitism which dominates the Australian mind, even as it calls for Russia to have no such "rights" regarding Ukraine.
Australia is an Anglophone colonial nation that has based itself in the proximity of Asia, placing itself on the boundaries of cultures and civilizations. Built on the destruction of its own indigenous population, such circumstances have historically conditioned a highly elitist identity in the country that has been prone to sporadic racism in relationship to its northern neighbors.
In the late 19th and early 20th centuries, Australia grew to perceive the influx of Asian peoples into its territory as a threat to its English-speaking identity, espousing the politics of "Yellow Peril" and soon the "White Australia policy" which actively sought to prohibit the migration of non-whites into the country. Although that policy has long been defunct, it nonetheless shapes the current underlying of the country's prejudiced discourse toward China, masking fears of racially led "infiltration" and "subversion" under the guise of anti-communism.
This attitude in Australia has long conditioned its foreign policy toward perceiving itself as being a vanguard force of civilization and moral exceptionalism to its surroundings, particularly in reference to the Pacific Island nations, of which it seeks to maintain hegemony over under the assumption that they and their Anglosphere allies are the only countries acting in their "true interests."
This is especially the case with the Solomon Islands, which is a former British colonial state and still comes under the British Crown. As is the same in Britain, countries in the Anglosphere exhibit a distorted rendering of history toward their former colonies. Having never been held to account for their crimes over them, they continue to exhibit an "ownership" mentality over these countries, perceiving their rule as having not been brutal or unwanted, but benevolent and supportive.
Therefore, the choice of these countries to opt for deeper ties with China is seen as an assault on their own identity and an act of aggression. As a similar comparison, when the island of Barbados ceded the British Monarchy last year, the country's right wing press actively blamed "Chinese influence," as if these countries could never be offended or resentful of the legacy of Anglophone colonialism.
The same goes currently with the Solomon Islands. Canberra continues to assume it has the right to dominate the country as a "benevolent protector" which constitutes its "backyard," presenting its efforts to form relationships with other countries (in this case China) as a political and military threat.
In reality, the Solomon Islands is not entering into a military alliance with China, nor is there any supposed "military base." The Australian media's presentation of the issue is typical of the exaggeration, paranoia and unhinged manner in which they have presented all China related topics. When the Solomon Islands initiated diplomatic relations with China in late 2019, it provoked a similar reaction. Yet in no circumstances has it become apparent to them that maybe the Solomon Islands does not wish to be exclusively dominated by Australia, and that it better suits them on a political, economic and diplomatic level to hedge their relationships between all great powers to procure maximum gains for themselves.
Yet, Canberra cannot detach itself from their exceptionalistic and blinkered view of the world that they cannot do anything but act in the "best interests" of the Islands, and delude themselves their hegemony is only an act of benevolence despite obvious acts to the contrary. This inability to conceive themselves for who they really are has led their press to brand the Solomon Islands' decision as a huge "diplomatic failure." But if it is a failure, it is a failure of them to be reasonable or realistic regarding the rise of China, and that the world does not revolve around English speaking countries anymore, let alone one with less people than Shanghai.

The author is a political and historical relations analyst. opinion@globaltimes.com.cn