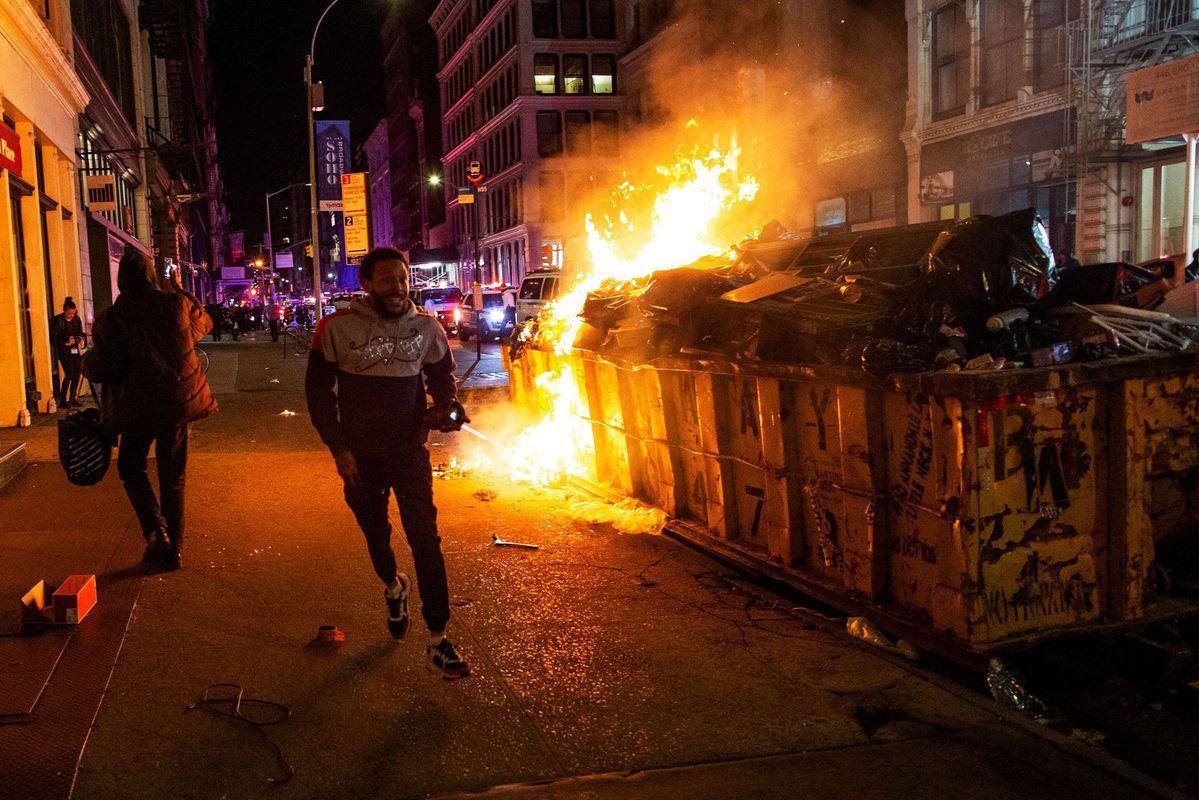 Protesters flee as they loot after marching against the death in Minneapolis police custody of George Floyd, in the Manhattan borough of New York City, US, June 1, 2020. (Photo: Agencies)

This was the tweet released by the US president very early Monday morning.

It came after hundreds of angry protesters had gathered outside the White House on Friday, some throwing rocks and trying to tear down police barricades, prompting secret service agents to reportedly rush the US leader to an underground bunker.

The US administration has been quick to holler about what it claims are human rights abuses in other countries, but the angry chants that could be heard all weekend across the US protesting at the killing of George Floyd by a police officer in Minneapolis, Minnesota, on Monday last week, the latest in a long line of African-Americans killed by white police officers, show that it should be looking closer to home.

Indeed, it could start by looking at its own actions.

The US president has been criticized previously for not condemning the violence of white supremacists, and even Twitter said it took issue with the "historical context" of the last line of a tweet from the US president, which it flagged on Friday. In it, the US leader appeared to quote former Miami Police Chief Walter Headley, who in December 1967 used the phrase: "When the looting starts, the shooting starts."

The tweet is now hidden behind a notice claiming it breached Twitter's policies on "glorifying violence". It can still be viewed and retweeted with a comment, but users cannot like it or reply to it.

It is all to the good that the US leader wants to restore law and order. But it is his administration's reaffirming of the historical color divide in the country and its woeful response to the COVID-19 pandemic that is now fueling the public anger over Floyd's death.

And while some countries keen to stay in the US' good books are always quick to join its chorus when it is criticizing other countries for human rights abuses, there has been a notable silence from these supposed human rights champions at the racism that plagues the US.

The international community and relevant international organizations have no excuses for pretending not to see the racist and human rights issues in the country.

As such pressure from the world on the US to address the issue of racism is not only a moral obligation, but also of tangible importance as it will be conducive to spurring the US government to fulfill its duties to take care of its own people, heed their voices and focus on

eliminating the US' institutional and social racism.

America will never be great while the truth is self-evident that not all Americans are viewed as equal, and some do not enjoy the inalienable rights of life, liberty and the pursuit of happiness.

But just as important as addressing the racism in the US is raising the awareness that any form of racism is a common enemy of humankind. It is a disease that has led to numerous atrocities throughout history. The dying words of Floyd "I can't breathe" should not be taken as just the words of black people in the US, but the cry of distress of all victims of racism.