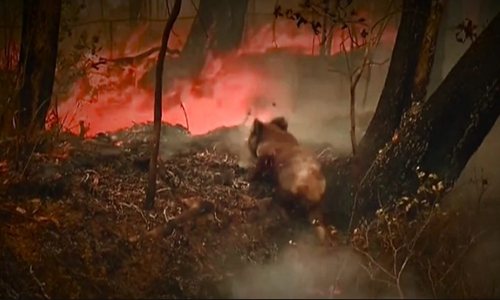 Screenshot of a video showing an Australian woman Toni Doherty rescuing a koala from a bushfire in New South Wales on November 19, 2019. (Photo: Global Times)

As the new year dawns, the whole world is aghast at the devastating bushfires raging across Australia, where more than 20 lives have been lost and many more people are unaccounted for. Heart-wrenching images of ravaged villages and townships, residents forced to flee homes, and 500 million koalas, kangaroos, wombats and other wild life creatures perishing in the inferno have brought to living rooms the intensity of the inferno.

Port and airport operations have been disrupted, with agriculture, husbandry, tourism, and other economic sectors badly hit. With the current tragedy, the situation has gradually got out of hand.

There are natural causes to the calamity. The persisting drought and record high temperatures have made self combustion easier and fire fighting efforts extremely difficult. The flammable eucalyptus trees and the flat topography let the firestorms spread easily. Sudden change in wind direction often makes flame movements unpredictable, and frequent dry lightnings ignite new blazes in the bush tinder.

There are, however, human factors involved.

Australia takes only 0.3 percent of the world population, but its greenhouse gas emission level is as high as 1.3 percent, making it one of the world's biggest emitters. Australia's target of carbon reduction has been criticized as too low and the government has not been too willing to take concrete steps. In addition to being the world's fourth-largest producer of coal, Australia is also a major exporter of fossil fuels, causing emission rise not only in the country but in the export destinations as well. The newly endorsed Adani Carmichael coal mine project in Queensland has gone ahead in spite of widespread opposition in the country.

There have been unyielding voices in Australia refuting links between the wrecking calamity and climate change. Former prime minister Tony Abbott has been a staunch denier of the scientific evidence of climate change, in particular of the relationship between the emission of carbon dioxide and global warming. Scott Morrison, the current Prime Minister, has said he will not make "reckless" cuts to the coal industry.

Such attitude and approach is naturally hazardous to nature. Rise in temperatures and the resulting lack of humidity have been among the major causes of the tragedy wreaking havoc across Australia.

In Australia, the fire safety and protection services are mainly the responsibility of the states and territories, causing a dysfunctional gulf between the federal authorities and the state and territory governments, as well as among the provinces. As Australia is a land perennially haunted by the bushfire menace, it is imperative to create national and inter-state schemes to better coordinate fire prevention and combating efforts.

The Australian fire fighting services consist largely of volunteers who, though extremely dedicated and highly skilled, have their own commitments. Only recently has the federal government mobilized the armed forces to participate in the rescue and evacuation missions.

Regretfully, recurrent mistakes by the federal authorities in handling the raging fire have also complicated matters. Morrison in December last year left to holiday in Hawaii with his family, which caused a massive outcry in the country. Recently, the Prime Minister injudiciously released a clumsy social media video extolling his government's efforts to combat the national catastrophe for partisan gains.

The hottest months in Australia are January and February, which means the worst time is only starting. In his recent statement, Chinese Ambassador to Australia Cheng Jingye paid tribute to those who have been suffering heavy losses in the disaster. We share his conviction that ultimately the terrible bushfires will be reined in with the heroism and dedication of the Australian people.