OPINIONS Raising children is no child’s play for Chinese families

Raising children is no child’s play for Chinese families 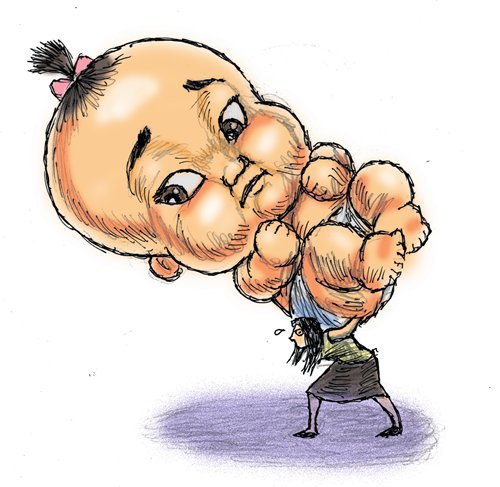 A set of postage stamps released to mark the Year of the Pig in 2019 has been taken by netizens as a hint to ease or lift limits on the country's two-child policy. The stamps show a smiling pig couple with three piglets. There is a philatelic precedent to the country's population policy. The zodiac stamps for 2016, the Year of the Monkey, feature a mother with two monkey babies. Soon after the stamps were unveiled in 2015, China increased to two the number of children a family could have, rescinding its one-child policy.

It's possible that the stamps were not designed to carry such a message. But it willy-nilly echoes public concern about whether China should end birth control to let people decide by themselves the number of kids they want to have.

Despite the low birth rate and an aging population, there is skepticism about the outcome of an unshackled birth policy. Yet this liberalization has to be implemented soon. Demography expert He Yafu last week said there was a 90-percent chance it will happen next year. And some foreign media outlets have predicted this could happen within this year.

As a developing country, China has turned into an aging society at a faster pace than developed nations. In 2017, people aged above 60 made up 17.3 percent of China's population, up by 0.6 percent year-on-year. In the same year, the number of babies born dropped by 630,000 from 2016. While the total fertility rate at replacement stands at 2.1, China's rate was 1.7 in 2016. It is estimated that the youth population will decrease by about 30 million in the coming five years, heralding a graver future of greying society and dwindling labor force. In fact, some scholars said the two-child policy should have been enacted much earlier than 2016 to slow down the demographic changes.

But will lifting birth limits be a panacea? Not really. The baby boom expected after the two-child policy didn't happen. People leading a stressful modern life take a more rational and guarded attitude toward having children. Among online comments on birth-related articles, you can find ubiquitous complaints about the burden of life. Sky-high property prices make many people heavily indebted to afford an apartment. High educational and healthcare spending on a child sometimes exceeds the family's income. It's a struggle for parents to get their kids into a relatively good primary school or even kindergarten. In many families, the elderly are unable to babysit and hence mothers have to quit jobs.

For most Chinese families, raising one child already demands all-out efforts of the whole family, let alone face the scandals involving unsafe baby formula, vaccines and drugs that keep cropping up. They lead to one conclusion: I don't want, or cannot afford another child, or even one child. Indeed, economic development is the best contraceptive.

Several provinces of China have recently adopted measures to encourage people to have more children, such as extending maternity leave and giving subsidies. But apparently these incentives are of little help when it comes to the huge cost of raising children. Simply asking employers to do more will therefore put working women in a more difficult situation, as seen after the implementation of the two-child policy. A survey by job recruitment website Zhaopin.com found that 33 percent of women had a pay cut after giving birth and 36 percent were demoted. And women without children or just one child are discriminated against in hunting for a job.

Developed countries like Denmark, Singapore and Japan have been troubled by low birth rates for many years and sought all means to encourage people to have more babies, but the measures didn't work out well.

In China, even if the restriction on birth is completely done away with, a majority of people will be reluctant to have a second or third baby. As a mother of a one-and-half-year girl, I, as well as my whole family, have no urge for more kids.