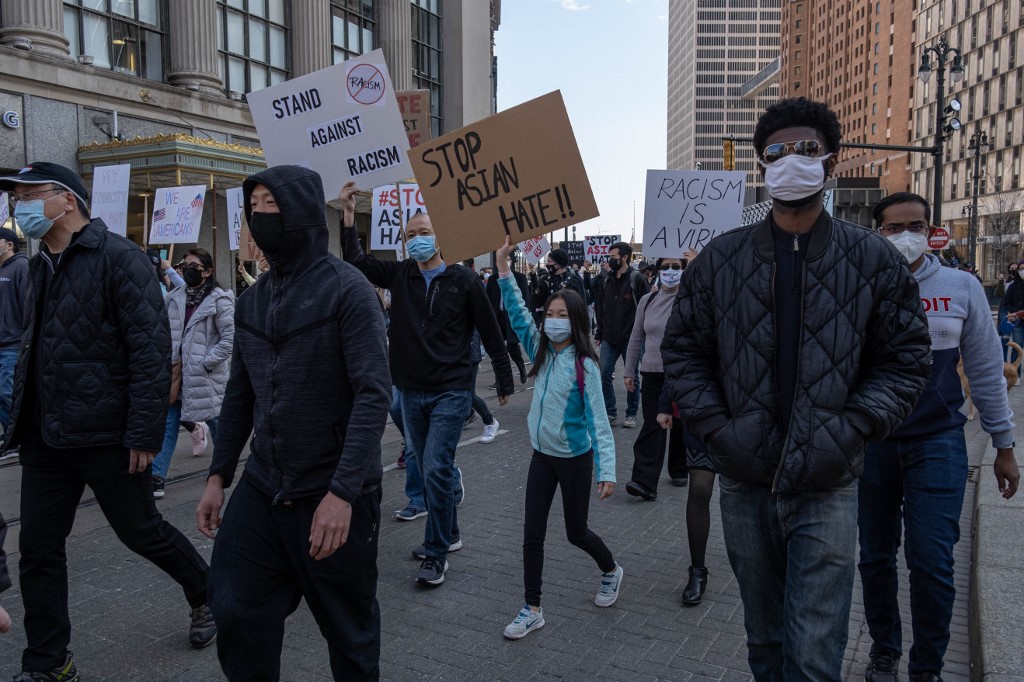 People march during a ‘Stop Asian Hate’ rally in downtown Detroit, Michigan on March 27,2021, as part of a nation wide protest in solidarity against hate crimes directed towards Asian Americans in the wake of the Atlanta, Georgia spa shootings that left eight dead. (Photo: AFP)

BEIJING, March 31 (Xinhua) -- Despite billing itself as a champion of universal human rights, Washington has habitually pointed fingers at others when it comes to this issue. However, its practice of finger-pointing is ironic and smacks of a double standard.

As the murder trial of former police officer Derek Chauvin charged with killing African American George Floyd in late May last year officially gets underway, the world is again reminded of the rampant racial injustice in the country.

"I can't breathe," were Floyd's words as he was begging the police officer who was kneeling on his neck to give him some air. Unfortunately, such basic human rights as the life and health of the minority groups in the United States have long been either neglected or violated.

Numbers tell the truth. After having examined 5,494 police-related deaths in the United States between 2013 and 2017, researchers from the Harvard T.H. Chan School of Public Health found that black Americans are 3.23 times more likely than white Americans to be killed by police.

Irresponsible U.S. politicians' downplaying of the threat of the coronavirus and endless scapegoating have also made the world's most powerful country the country hardest hit by COVID-19 around the globe.

A report published in February by the Lancet pointed out that around 200,000 Americans would not have died if proper measures had been taken.

Even more tragic, the country's ethnic minorities have suffered the most from the pandemic. According to a report by the National Urban League, African Americans are three times as likely as whites to be infected with the virus, and twice as likely to die from it.

The deep-rooted racial and gender inequality in the United States is also revealed in the surging number of hate crimes across the country. A report by U.S. nonpartisan research and policy organization the Center for the Study of Hate and Extremism said anti-Asian hate crimes rocketed by nearly 150 percent in 2020 in the 16 largest cities in the United States.

The sad truth is that the mass shooting in mid-March in Atlanta which killed eight people, including six Asian women, is not, and will not be, the only tragedy.

While ignoring their own obligations in protecting Americans' human rights at home, U.S. politicians are quite eager to play the human rights card to criticize other countries.

After examining America's staggering racial disparity, one cannot help but wonder whether those politicians' accusation is just another tactic of diverting blame from themselves. No one would be surprised if that assumption is true.