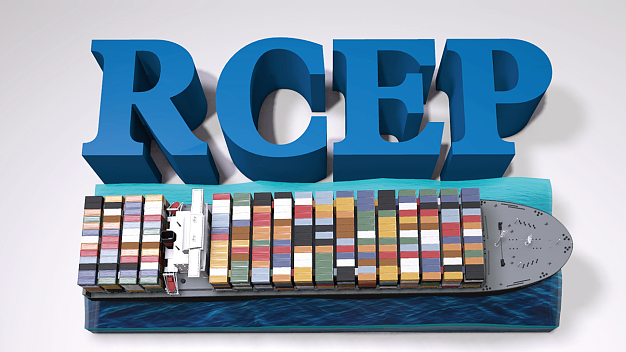 The leaders of RCEP participating countries on Sunday witnessed the signing of the long-awaited trade pact, which was made by their trade ministers on the sidelines of the ongoing 37th ASEAN virtual summit.

After the signing, the RCEP participating countries will begin their respective domestic processes to expeditiously bring the agreement into force.

Chinese Ambassador to ASEAN Deng Xijun told Xinhua that the successful signing of the RCEP is a major victory for multilateralism and free trade, and a major boost to regional and global economic recovery under the new normal of COVID-19 situation.

The RCEP covers a market of 2.2 billion people, or almost 30 percent of the world's population, with a combined GDP of 26.2 trillion U.S. dollars or about 30 percent of global GDP, and accounts for nearly 28 percent of global trade (based on 2019 figures), according to a joint statement at the fourth RCEP summit earlier Sunday prior to the signing ceremony.

Malaysian Minister of International Trade and Industry Mohamed Azmin Ali said in a statement on Sunday that "the RCEP can be an economic recovery tool against COVID-19 which will help to ensure opening of markets as well as uninterrupted supply chain."

Chheang Vannarith, president of the Phnom Penh-based Asian Vision Institute, said the RCEP would provide economic impetus for regional countries to rebound together from the economic recession caused by the COVID-19 pandemic.

"The RCEP will promote cross-border regional trade and investment as it will further reduce barriers to trade, expand integrated regional market, and strengthen regional supply chains," he told Xinhua.

Kin Phea, director general of the International Relations Institute of Cambodia, said it was the right time that the RCEP was signed, saying that it would reduce trade barriers and enhance market access. "It will make each RCEP member more attractive to foreign investors and encourage cross-border investments amongst RCEP members."

Chheang Vannarith said the pact sent a clear signal that regional economic integration in Asia remains robust and vibrant although protectionism and unilateralism are on the rise in the United States and other regions.

"The RCEP is a big push to counter protectionism and unilateralism," he said. "It will help boost regional and global economic recovery as it will enhance business confidence, strengthen regional supply chains, and a demonstration of collective political commitment for an open, inclusive and rules-based multilateral trading system."

Peter Drysdale, head of the East Asian Bureau of Economic Research at the Australian National University, said the agreement has particular significance at this time when world trade has been under threat because of increased protectionism.

"This is a big statement for trade liberalization and for protecting the open global trading system," he told Xinhua.

Jin Jianmin, a senior fellow at Fujitsu Research Institute in Tokyo said that the RCEP provides a model for the cooperation and development of other regions and the whole world to restore/improve the free trade system and governance mechanism.

FURTHER INTEGRATION TO BENEFIT ALL

Observers believe that the RCEP will promote trade and investment growth and regional economic integration in the Asia-Pacific, strengthen stability and connectivity of regional industrial chains and supply chains, increase employment, and spur economic growth.

"The RCEP is a demonstration of partner countries' commitment to greater economic integration for the benefit of our people and businesses. Beyond its economic value, it is also a statement of our strategic intent to have a shared interest in each other's prosperity and success," Chan said.

Kin Phea from Cambodia said the RCEP's structure is truly meant to benefit all participating countries because all will be governed under the same trade rules.

"This trade pact is instrumental in subverting creeping unilateralism because it pulls all bilateral free trade agreements (FTA) into one economic sphere, under one blanket trade ruling," he said.

He said the RCEP could facilitate smaller ASEAN economies such as Cambodia, Laos and Myanmar, to further strengthen their FTAs and to narrow the development gap among ASEAN member states by spurring foreign direct investment (FDI) to smaller economies and integrating them more fully into regional economic activity.