BANGKOK, Nov. 5 (Xinhua) -- A crucial breakthrough in negotiations on a mega regional trade agreement announced here on Monday has reaffirmed the Asia Pacific's strong support for free trade and multilateralism. 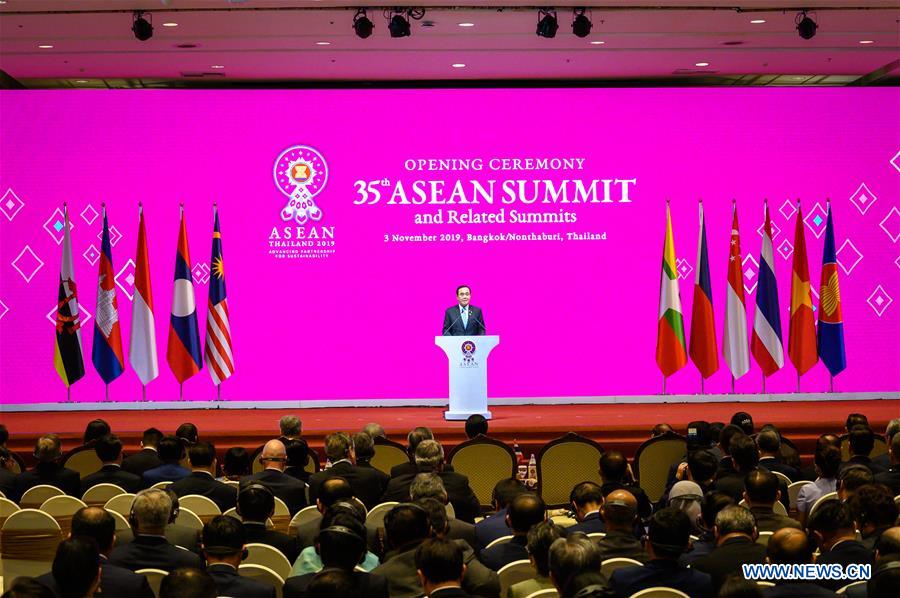 The 10-member Association of Southeast Asian Nations (ASEAN) and its six Asia-Pacific free trade partners -- namely China, Japan, the Republic of Korea, India, Australia and New Zealand -- said in a joint leaders' statement that 15 out of the 16 RCEP participating countries have concluded text-based negotiations and essentially all their market access issues.

The countries also said that all RCEP participating countries will work together to resolve the remaining issues with an eye on signing a deal next year.

Initiated by ASEAN in 2012, the proposed free trade agreement aims to open up trade between the Asia Pacific region's biggest and fastest-growing economies and achieve a comprehensive, high-quality and mutually beneficial economic partnership, covering trade in goods and services, investment, economic and technological cooperation, intellectual property, e-commerce, dispute settlement and other related issues.

The breakthrough in RCEP negotiations largely represents the collective willingness of the 16 negotiating parties to harmonize existing deals and push forward the integration of the Asia-Pacific region.

It is also a clear demonstration of the Asia Pacific's commitment to free trade at a time when the international community is facing rising economic uncertainties due to flaring trade protectionism and a slowdown in both global investment and consumer demand.

The RCEP is an inclusive trade agreement given that its 16 participating countries are quite different in terms of size in territory and population, as well as development level and culture, among others.

The possible completion of such a big deal will not come easily as trade talks are always about reasonable and balanced give and take.

The past seven years have seen about 30 rounds of talks, during which negotiators have not only argued for their respective interests, but also showed willingness and flexibility in search of a common ground.

If implemented, it will create a more open and inclusive Asia, bolster the economies of all members, and strengthen global economic growth and the multilateral trading system.

China, a strong advocate for free trade and multilateralism, has played an active role in pushing forward the negotiations and supported ASEAN's central role in the process.

Also, trade ties between China and the ASEAN members have seen remarkable growth over the past decade. ASEAN is now China's second-largest trading partner and China has been ASEAN's top trading partner for ten consecutive years.

While the breakthrough is valuable, there's no time for rest; rather, all parties concerned must work even harder to finalize the deal and create renewed hope for a troubled global economy.