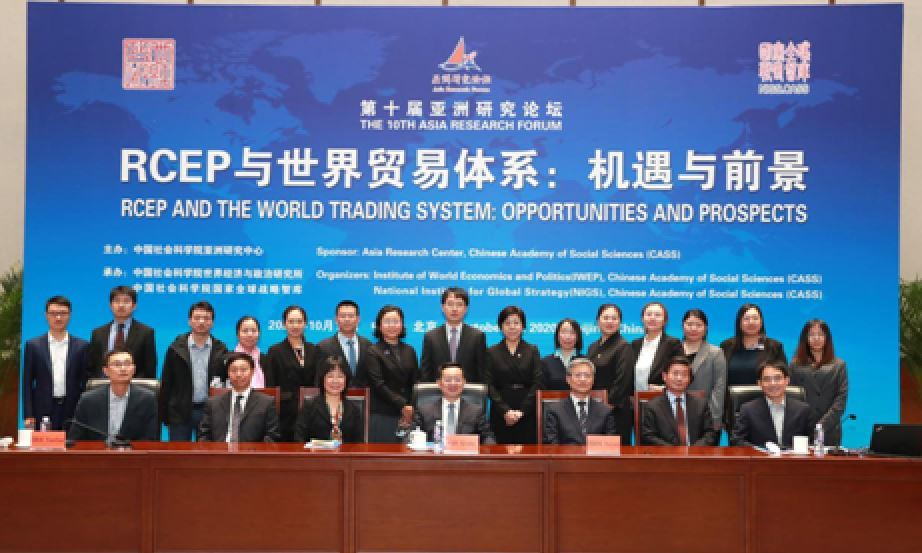 With the global situation changing drastically, Regional Comprehensive Economic Partnership negotiations are conducive to maintaining the multilateral trading system, promoting the deep integration of the global industrial chain and playing the role of a "booster" in building an open world trading system.

Experts stressed this and other topics at the 10th Asia Research Forum, titled "RCEP and the World Trading System: Opportunities and Prospects" and held on Oct 14. The event was hosted by Asia Research Center, Chinese Academy of Social Sciences, and co-organized by the academy's Institute of World Economics and Politics and National Institute for Global Strategy.

Global scholars said at the forum in the context of the raging COVID-19 epidemic, promoting the Asian region to reach a modern, comprehensive, high-quality and mutually beneficial economic partnership agreement will significantly promote growth in the region, bring huge benefits to countries and contribute to global economic recovery.

"RCEP, with strong complementarity among participants, is of great significance to the development prospects of the regional economy," Gao said.

New opportunities brought by global economic challenges were also discussed. According to Park In-kook, president of the Chey Institute for Advanced Studies, multilateral cooperation is more necessary than before in face of these challenges. Asia has become the engine of the global economy. If joint efforts can be made to further realize the potential of Asia, this region will become a place of unlimited possibilities.

"Economic cooperation through RCEP goes beyond just trade in goods and services," he said. "It will promote the development of society, economy and culture in Asia. At the same time, it will bring about a new situation in our global trading system."

Peter Drysdale, emeritus professor and head of the East Asian Bureau of Economic Research and East Asia Forum at the Crawford School of Public Policy at Australian National University, said the RCEP is the world's largest free trade agreement not only in terms of the number of member states, but also its economic potential. It includes both economic cooperation and continuous political participation, which is a great achievement for the signatories.

In the concluding remarks, Zhang Yuyan, member of CASS and director of the Institute of World Economics and Politics, emphasized the significance of the RCEP.

Currently, the world's multilateral trading system is facing difficulties, he said, and RCEP plays an important and positive role in promoting trade and investment in Asia-Pacific countries, helping to boost global economic confidence and eliminate obstacles to resource allocation in the domestic market.

"RCEP, as an upgraded version of the trade agreement, is in line with the development trend of global trade. In the future, China will continue to maintain an open attitude in the process of globalization, actively advocate RCEP cooperation, and contribute to global economic growth."