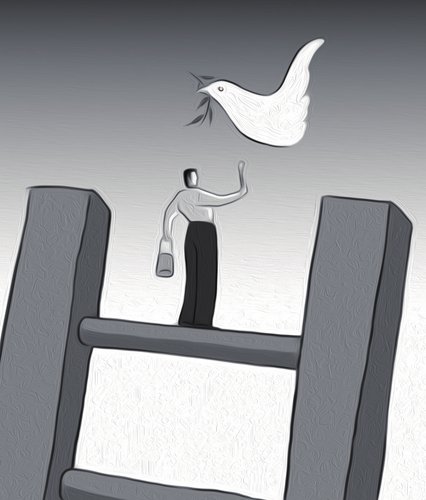 The recent meeting between Chinese President Xi Jinping and North Korean leader Kim Jong-un in Dalian is an essential part of the effort to establish a consensus that will ensure the historic summit between US President Donald Trump and Kim is successful.

The summit, if held, will fundamentally alter the geopolitical makeup of the region and unlock long hidden elements frozen in a Cold War system. There has been ceaseless chatter about the significance of the much ballyhooed Trump-Kim summit. There has been speculation over the possibility of the summit being able to deliver more than fabulous photo-ops and fascinating anecdotes.

And President Trump is not idle either. He issued numerous tweets suggesting he expects a breakthrough with Kim at the upcoming summit. Yet the same president was tweeting, and lecturing, about a unilateral nuclear attack on North Korea not that long ago.

We rather need a global consensus on what President Xi has called "a community with a shared future for mankind," which is so powerful that it overrides self-centered power games in Washington.

Kim remarked in Dalian that he anticipated "step-by-step and synchronized measures" to normalize North Korea-US relations that "will ultimately realize denuclearization and establish a lasting peace on the peninsula."

Such a plan sounds logical to any nonproliferation expert. It was the strategy under Bill Clinton and Kim Dae-jung. But today such experts have no influence whatsoever on US policy. Trump is surrounded by extremists like John Bolton who have no interest in a gradual approach to anything, and know little about technology.

Russia has also shown vital interest in negotiations over the Korean Peninsula. Russia's influence in geopolitics has risen exponentially over the last five years and it could well be in a position to demand a seat in the discussions. More importantly, US-Russian relations have hit such a low that political conflicts with Russia will end up coloring any agreement, whether intended or not.

That brings us to the extremely serious problems that lie beneath the surface of glitzy media coverage of negotiations with North Korea. We are facing a perfect storm involving politics, economics and simple institutional collapse that threatens the survival of any agreement.

We will be facing a crisis on a scale we have not seen since the 1930s if this process goes forward in Washington. The ability of the global community to agree on basic principles of international relations will be questioned at the moment a debate about the future of the Korean Peninsula is being launched.

China's response to this intricate position on the Korean Peninsula will be critical. It is essential that China adhere to the high standards for international affairs set down in the UN Charter and that it work together to establish common goals for collaboration.

At the same time, we need to bring in a complex group of politicians, academics, creative thinkers, youth and NGOs to debate with a strong sense of historical significance about the future of the peninsula and the integration of East Asia. If we look back to the founding of the United Nations, we realize that it did not grow out of the short-term concerns of politicians, but rather from an earnest global movement that demanded a transparent and accountable form of governance in the debris of the fascist bid for global conquest.

The response of institutions to the international crisis will require imagination, willpower, bravery and a vision for what a better world could be. We cannot let this dangerous drift toward chaos continue. The time has come to turn the resolution of the crisis on the Korean Peninsula into a movement for a new concept of peace which engages so many people in so many ways.

The solution must be so transformative that it cannot be set back. In fact, the transformation of the Korean Peninsula should be assumed to be by its very nature an occasion that comes every 500 years when we must completely rethink the threats and opportunities of our age and make a definitive and inspired effort to come up with a new system of things.