OPINIONS Red Square Parade is more than commemoration for Russia

Red Square Parade is more than commemoration for Russia 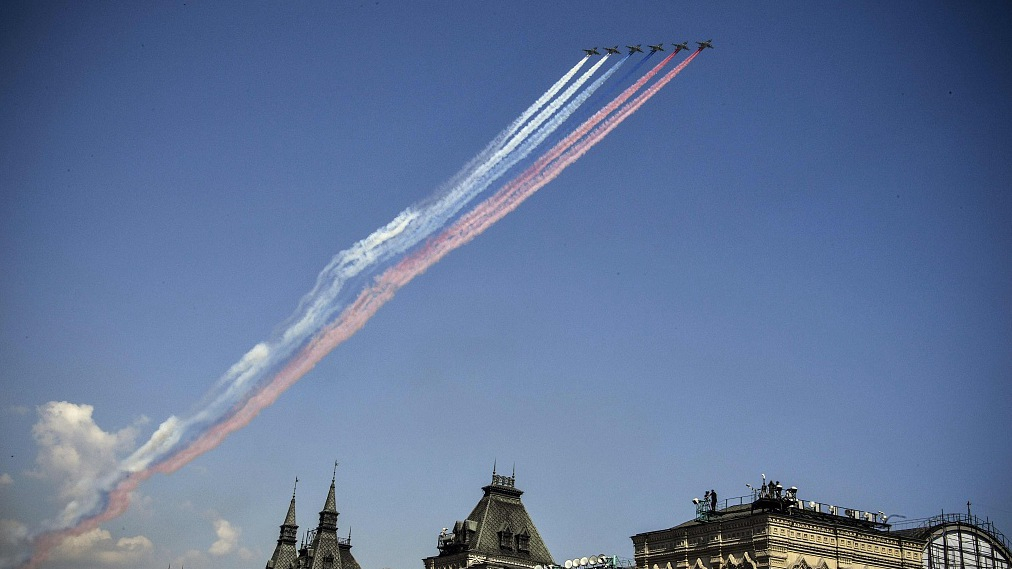 Military parades commemorating the 74th anniversary of the victory of the Great Patriotic War was held in 29 Russian cities on May 9, of which the largest one with the most participants was in the Red Square. More than 130 modern weapons and military hardware, 35 infantry phalanxes and air squads composed of more than 13,000 soldiers attended the ceremony.

As can be seen from the media activity guide "Heritage over Time" centering on the Victory Day released by the Russian Ministry of Defense, "heritage" is still the theme of Russia's military parade and has remained so for centuries.

Russia has a long tradition of military parades. In the middle of the 17th century, Russian troops returned to Moscow after battle and marched past the Red Square to show off their victory and prowess. It gradually became a common practice.

After the October Revolution in 1917, mourning the heroes who sacrificed their lives for the socialist revolution became a new norm at the military parade. The parade played a significant role in inspiring the morale of the army to defend the newly-established Soviet government.

On November 7, 1941, when the German troops arrived on the outskirts of Moscow, Stalin held a military parade in Red Square and delivered a speech to support troops that would soon go to the frontline. The scene of families singing Katyusha to see the soldiers off is still fresh in people's memory.

After the disintegration of the Soviet Union, there was a counter-current in Russia that dismissed the Great Patriotic War. The United States and some eastern European countries compared Stalin's system with Nazism and regarded the Soviet Union as the "instigator" of World War II.

In the view of Russian elites, the competition between Russia and Western countries is not only limited in the military field but also the new battlefield of culture and cyberspace. The well-orchestrated propaganda campaigns from the West are trying to influence the Russian Federation's guiding values and ideological system.

The distortion of a nation's history and moral beliefs risks leading to the collapse of the whole country. Patriotism provides a solid cultural and moral foundation for safeguarding the integrity of a country.

In Kremlin's view, the military parade not only shows respect for the veterans, but also, more importantly, serves to maintain the truth about history and the war, mourns the martyrs who sacrificed themselves for the victory of the war, and highly praises the Soviet Union and its people for their contribution to the victory of anti-fascism. In the eyes of most Russians, today's parade is more than just honoring those involved in the war; it's a way to educate the younger generation.

A country needs a vehicle to carry out patriotic education. It can either be theory, culture, history or be a mixture of these approaches. After the disintegration of the Soviet Union, Russia paid attention to the special episode of the Great Patriotic War and used its spirit as the essential content to carry out patriotic education for its citizens.

The military parade itself is a vivid lesson of patriotic education. While getting to know the history of the nation, its current military might and the overall strength of the country, the vast number of young people have been baptized with patriotism so that they can truly love their own country through actions that contribute to Russia's future.

More than 80 percent of the military technology and hardware of the Russian armed forces displayed at the Red Square parade on May 9 have been used in the anti-terrorism campaign in Syria, which accelerated the pace of Russia's military reform. All this was accomplished without an increase in Russia's military budget and at a time of sluggish economic recovery.

The annual Red Square military parade may be slightly dull and unsensational. Perhaps Putin's inspiring remarks no longer resonate as strongly as in the past. However, no one can deny that the deterrence demonstrated by the top weapons and strong troops at the parade has once again enhanced Russia's national pride and cohesion.