OPINIONS Region to suffer collateral damage of a trade war

Region to suffer collateral damage of a trade war 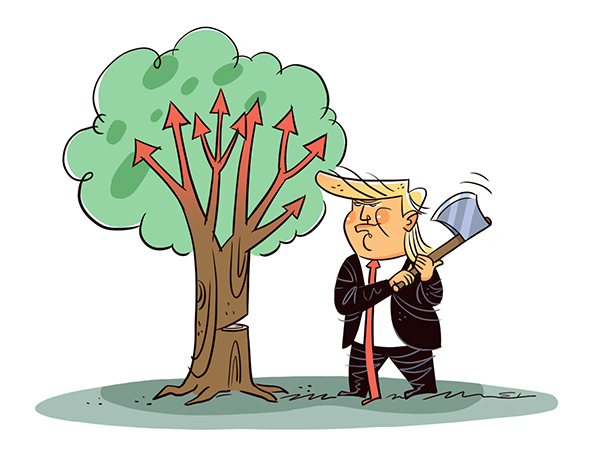 A series of decisions by the US to impose trade tariffs on its various key trade partners, including China, the European Union, India, Russia and the North American Free Trade Agreement signatory countries－Canada and Mexico－have pushed the world toward escalating trade protectionism amid rising retaliatory "tit-for-tat" tariffs as well as non-tariff measures.

The Asia-Pacific region is particularly vulnerable to such rising global trade protectionism given the high share of exports in the overall GDP of many East Asian economies.

The US government has decided to impose tariffs on various imports from its key trade partners, China being a main target. It has imposed punitive tariffs of 25 percent on Chinese goods worth $34 billion from July 6. China immediately retaliated with tariffs of 25 percent on an equivalent amount of US imports, targeting US agricultural products such as soybean, dairy products and beef as well as US-made autos and parts. Tariffs on additional $16 billion of imports from China are currently being considered by the US administration as part of its "investigation" under Section 301 of the Trade Act of 1974.

On July 10, the Office of the United States Trade Representative announced that President Donald Trump had ordered it to begin the process of imposing tariffs of 10 percent on an additional $200 billion of Chinese imports.

Total Chinese merchandise exports to the US reached $505 billion in 2017. So, if the latest move is approved, what will be the impact on Chinese exporters?
The US tariff measures will hit the Chinese export sector hard. Chinese exports of electrical and electronic products such as auto parts, printed circuits, refrigerators, vacuum cleaners, industrial machinery and electrical lighting equipment are among the products targeted by the US tariffs planned or already implemented. Chinese textile products, including cotton and woolen fabrics and yarns, and steel, copper, nickel and aluminum products are also affected by the tariff measures.

US tariffs will have transmission effects

As for the collateral damage, a part of the US' punitive tariffs on China will be transmitted to many of the Asia-Pacific economies. These economies will suffer collateral damage if a full-fledged trade war breaks out between the US and China, because they are part of the integrated East Asian manufacturing supply chain that provides raw materials and intermediate goods to China. In fact, China is an important export market for all Asia-Pacific economies.

The East Asian electronics industry supply chain is particularly vulnerable to the US tariff measures. Electrical and electronic manufacturing exports are among the key Chinese exports targeted on the new US list of $200 billion of Chinese products. Significant intermediate inputs for Chinese production of these goods are sourced from Asia-Pacific economies such as Singapore, Malaysia and South Korea. For example, China is the most important export market for South Korea, accounting for 25 percent of total exports, while 13.5 percent of Malaysia's merchandise exports go to China. About one-third of the total value of China's exports comprises foreign value added. Since a significant share of Chinese exports are manufactured by foreign multinationals, US and other foreign multinational corporations based in other countries, such as Japan and South Korea that are manufacturing products in China for export to the US, will also be hit by these measures.

But the dark clouds of protectionism have a silver lining for some countries as escalating bilateral tariffs between the US and China force importers to seek alternative sourcing of imports. Alternative suppliers of agricultural exports, such as Australia and New Zealand, will be likely winners from any trade diversion effects of a US-China trade war. Chinese tariffs on US imports will also result in multinationals switching sourcing of intermediate goods and raw materials for their Chinese factories away from US sources toward alternative production hubs in their global supply chains. The electronics industries in South Korea, Singapore and Malaysia could also benefit from some trade diversion effects as Chinese technology companies switch sourcing of electronic products away from US suppliers.

Although the Asia-Pacific region has shown continued strong growth momentum during the first half of this year, the impact of the US-China tariff war and other global trade frictions are creating increasing downside risks to regional trade flows in the second quarter of 2018 and for 2019. Many Asia-Pacific economies are particularly vulnerable to a US-China trade war as their manufacturing sectors are integrated into China's manufacturing supply chain, with around one-third of China's manufacturing output comprising foreign inputs.

Negotiated compromise trade deals between the US and its key trade partners remain the most optimal solution. However with no early end appearing to be in sight for the escalating "tit-for-tat" world trade frictions and rising trade protectionism, the possibility of a full-fledged global trade war has become one of the key downside risks to world growth and trade in the second half of 2018 and for 2019.