OPINIONS Regional conflicts should give way to virus fight

Regional conflicts should give way to virus fight 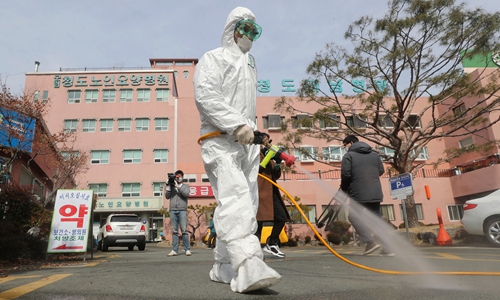 A South Korean health official sprays disinfectant in front of a hospital where a total of 16 infections of COVID-19 have been reported, in Cheongdo county near the city of Daegu on Friday. (Photo: AFP)

Since the outbreak of the novel coronavirus pneumonia (COVID-19), the virus' high magnitude of infectivity and public concern about the epidemic have put China through several economic and social tests. When it comes to complexity of epidemic prevention and control, China is enduring extraordinary challenges in fighting against the COVID-19, which has been declared a public health emergency of international concern by the World Health Organization.

At the early stage of the COVID-19, Japan and South Korea didn't report large-scale cases of infection, and as their pressure of epidemic prevention and control was not too big to bear, an atmosphere of solidarity with China's fight against the virus had emerged in these two countries. Appeals for Japan-China, South Korea-China friendship have continued to dominate social media platforms and public opinion.

However, the number of confirmed COVID-19 cases in Japan and South Korea soared in the past few days, including deaths. Reportedly, there were transmissions by indirect contact, and even people without symptoms tested positive for the virus. As of Friday, Japan reported 727 cases, including 634 passengers of the Diamond Princess cruise ship, while South Korea confirmed 204 cases of infection, with 100 confirmed new cases on Friday. Currently, South Korea and Japan stand as the second and third most infected countries respectively after China.

Due to the sharp rise in confirmed cases, both Japanese and South Korean governments were slammed with criticism.

Japanese Prime Minister Shinzo Abe's cabinet was widely criticized for downplaying the epidemic and missing out on the best timing to contain the COVID-19. Particularly, some critics said the cruise ship quarantine "may not have been effective."

South Korean President Moon Jae-in was criticized for failing to attach enough importance to the epidemic, which led to mass infections, including infection cases in the country's 600,000-strong military.

Such being the case, to keep the COVID-19 under control, and to prevent social panic is the most urgent task for the two countries.

Amid the regional integration in East Asia, economic interdependence among China, Japan, and South Korea continues to grow with rising people-to-people exchanges. The unconventional threat from the COVID-19 requires the three countries to adopt not only a calm response in accordance with their respective national conditions but also join hands to overcome the challenge.

Besides, the three countries should put bilateral and trilateral epidemic-related cooperation on the agenda, and focus on material assistance, information sharing, allocation of medical resources, R&D of vaccine, medical aid, and social stability.

In other words, to win this fight against the coronavirus and minimize the economic losses, a joint effort, along with increased mutual understanding, are pertinent during this crucial period.

In the face of the epidemic, China, Japan, and South Korea should abandon the fetters of historical grievances and any ongoing contradictions, and put aside the factors that affect their cooperation against the epidemic.

The three countries should seek common ground while shelving differences to jointly overcome the harsh time.

Regional hot spots, such as the Korean Peninsula nuclear issue and the Tokyo-Seoul frictions, that once steered cooperation and interactions in East Asia would give way to battle against the COVID-19. The epidemic prevention and control and safeguarding people's lives and public health will be a test for the three countries' ruling parties and governments.

Sound cooperation on this aspect will possibly boost ties among the three countries and create a benign atmosphere and opportunity for them to push forward their free-trade agreement.

It is certain the epidemic will affect China's growth in the short-term, and it could also cast a shadow on the Chinese economy for 2020. The increasing threats of an epidemic outbreak in Japan and South Korea will also cause new uncertainties for the two countries and may even trigger a recession.

East Asia has gradually become a new economic engine of the world in the past few years. China, Japan, and South Korea have been making a growing contribution to the world economy, which could be further reinforced if a free trade agreement is reached.

As the epidemic evolves into a pandemic and gives rise to difficulties in prevention and control operations, once the impact of the COVID-19 on economy extends from the three East Asian countries to the entire region and globally, the sound perspective of their cooperation would be overshadowed.

Nonetheless, if the epidemic ends before long, East Asia is still worth looking forward to as a leader in free trade, a locomotive for regional growth, and an engine driving global economic growth.