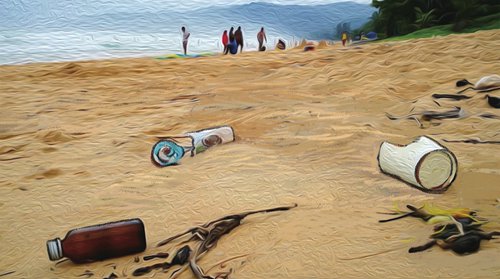 It's a fallacy to believe that tourism only brings all that is good and pleasurable. It certainly does not. The spontaneous joy and carefree life that we should lead have been used countless times by tourism boards in marketing campaigns. As a travel addict myself, I see nothing wrong with falling in love with travel and having itchy feet. However, travel should not be just about taking pictures and finding yourself amid a surging crowd of holidaymakers. As exciting as growth can be, the impact and reaction that boosting numbers can have on destinations around the world needs to be thoroughly examined. Ignoring the downside of tourism when it brings in money and boosts the economy is easy. The behavior of tourists directly contributes to the disadvantages that tourism brings.

Some have asked for a clearer definition of overtourism. It is broad and yes, its manifestation varies with destinations. While one destination only sees its cities being swamped, others will see little known sights suddenly gaining popularity, which leads to shortage of infrastructure. Whatever it may be, one thing is for certain: change. And everyone is indeed fighting for a shot of Mona Lisa in Paris, Ponte dei Sospiri in Venice and King's Landing in Dubrovnik. The list goes on.

Overtourism has led to many problems. Look no further than what happened to the pink grass in October in Hangzhou, East China's Zhejiang Province. Carefully cultivated over three years, the carpet of grass was damaged by busloads of travelers who ignored signs and crossed rope barriers to trample the undergrowth in search of that perfect shot. Tourists' social media accounts were filled with countless "likes," but now everything is gone.

Maya Bay in Thailand, renowned for its white sand and clear water, saw its ecosystem severely damaged by visitors. Thai officials initially closed it for four months before deciding to shut it down indefinitely. There is now nothing left there for others to see. These are just small cases in a sea of troubles.

Social media is that double-edge sword which is unfortunately used to promote overtourism. Intertwined with tourism boom, which for many countries means economic growth, it can also put a strain on the local population. Promotion is however not bad. Instead of just focusing on one attraction, social media can be used to introduce newcomers to a whole range of tourist hotspots to balance out visitor numbers, minimize environmental damage and allow some breathing space for infrastructure and resources. An iconic attraction doesn't necessarily mean fun and is certainly not the most unique.

Growing number of visitors affect a whole ecosystem from littering to noise pollution to creating nuisance for local people to influencing hotel prices to congestion and more - making a destination unsustainable.

As visitors create local conflicts, forget the pleasure that comes with traveling. We complain about sights being closed down and having our numbers limited or cruise ships being barred or having to pay higher costs for acquiring permits. But it is us who play the role of sucking the charm of a place faster than we could preserve and restore it.

Come to think of it - we might as well have limitations in place if it means preserving the scenic spots in this world for future generations. There is no magic solution to curbing overtourism. Positive examples from gorilla watching in Rwanda to a Bhutan trip exists from which we know that more (tourist numbers) is not necessarily better. Permits allow travelers to plan ahead and to enjoy without creating havoc.

That urge to travel, how we engage with the world and how we promote it online can be seen as tools in either helping or destroying tourism. Like ideas, these tools could be used to positively contribute to the industry of which all stakeholders benefit.

We need to understand that with opportunities come challenges. The key lies with not just government, tourism boards, travel providers and locals but with every individual to think and spend like a local economist. Above all, we need to travel like a diplomat, an environmentalist and true adventurer. Balance is the key here to ensure that tourism is never over or under.

This world is big and stunning enough to accommodate all types of travelers. May we travel green, responsibly and show respect to everything that is involved in this ecosystem called travel.