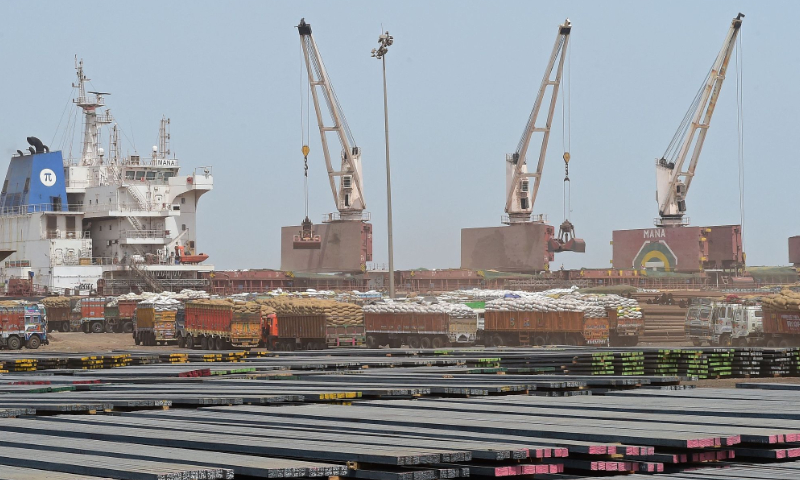 Trucks loaded with wheat arrive at the Deendayal Port Authority at Kandla in India's Gujarat state on May 18, 2022. （Photo: VCG）

India and the European Union (EU) on Monday formally relaunched negotiations toward a free trade agreement, ending a freeze of nearly a decade, and aiming to reach a deal by the end of 2023, according to the Nikkei. India's Commerce and Industry Minister, Piyush Goyal, reportedly said that the India-EU trade pact can help unleash significant untapped potential.

There is no doubt that reaching a free trade agreement is of great economic significance to India and the EU but this negotiation is far from being as easy as it seems. India and the EU started trade talks in 2007, but they stalled in 2013 as both sides failed to reach an agreement on key issues, including customs duties on automobiles and the movement of professionals.

The two sides are looking to have trade negotiations that are "broad-based, balanced and comprehensive," Goyal said, Indian media reported. As the EU is seeking to sale more products in the vast Indian market, barriers to access the market that are impeding trade, are expected to be a crucial part of the agenda in the negotiation. To what extent will India open its market will attract wide attention.

India's economic development over the years has been in a dilemma. On the one hand, it protects the domestic industry from being further impacted by foreign competition. On the other hand, without opening up, it is impossible for India to enhance the competitiveness of its own industries. The lingering contradiction is a serious problem restricting India's development.

It is an economic dilemma facing all developing countries in their growth process. Any country that develops to this stage must bear certain shocks on domestic industries by opening its economy. While striking a balance is crucial for India's economy, it is clear that opening up and promoting free trade at this stage can help bring more benefits.

India has indeed become more open to lowering trade barriers in recent years and is negotiating agreements with several countries. India signed a major trade agreement with the UAE in February and an interim free trade agreement with Australia in April. In addition, India is also in trade talks with the UK. Overall, these trade talks are conducive to further opening India's economy.

However, India's moves in expanding trade deals further show that the country seems to be only interested in building its own trade and industrial supply chains. For example, India opted not to join trade pacts promoting regional trade facilitation, such as the RCEP.

A piecemeal opening approach, which is admittedly beneficial to India's economy to some extent, also means that it will be more difficult to continue to move forward in the opening process. In fact, a higher level of openness will help its pursuit of becoming a global manufacturing powerhouse and occupy a better position for cooperation with the industrial supply chains in Asian economies.

For India, integrating into regional development is not in conflict with upgrading of its own manufacturing capacity. It is beneficial for both its foreign trade and domestic industries if India chooses to integrate into the Asian industrial supply chain and deepen cooperation with economies like China, Japan, South Korea, and ASEAN.