OPINIONS Reminder war against virus not yet won

Reminder war against virus not yet won 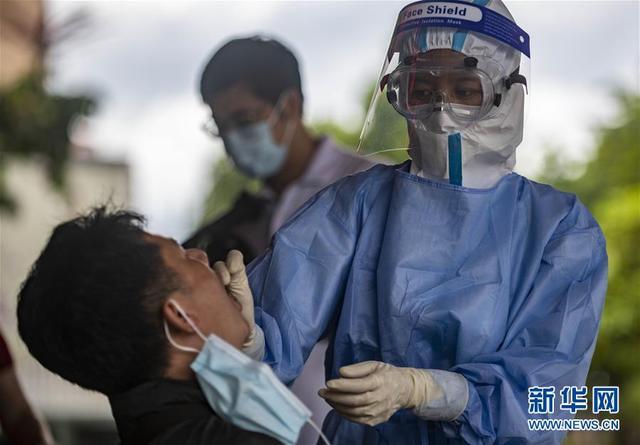 A medical worker collects a swab sample to test for COVID-19 at a community nucleic acid testing site in Ruili, Yunnan province on Sept 15, 2020. (Photo: Xinhua)

As businesses restart, schools reopen, and the economy regains vitality, the country is increasingly close to pre-pandemic normalcy.

But just as people may be easing their vigilance and embracing the "post-pandemic new normal", the small border town of Ruili in southwest of Yunnan province offered a stern new warning that there can be no complacency.

Following the confirmation of two fresh imported COVID-19 infections in Ruili from neighboring Myanmar on Sunday, eight prefectures/cities and 25 counties in Yunnan province's border areas were ordered to "immediately enter a wartime state" to fend off the virus.

In Ruili, in particular, all residents in the city proper are under weeklong compulsory home quarantine, receiving nucleic acid tests, and prohibited from leaving the city "except under special circumstances". All business venues, except supermarkets, pharmacies, and farmers' markets, have been shut down. All local traffic, with the exception of that for essential supplies, has come to a stop.

Since the citywide freeze came all of a sudden, there was little time to prepare. As a result, there have been reports of drastic price hikes for many everyday necessities.

Fortunately, the city has only slightly more than 210,000 permanent residents, and with the Yunnan authorities mobilizing quickly and broadly to guarantee supplies, the possibility of sustained shortage or speculative activities significantly disrupting local supplies is very low.

As the country has learned over the past months, early detection and intervention remains the most effective safeguard in the absence of an effective vaccine or treatment. Precaution in such a form is no doubt costly and controversial. But there is simply no better alternative for the time being.

The trouble for Ruili started with the illicit entry of two people infected with the virus, which again highlights the importance of proper border control. But it has been relatively easy to practice control over lawful entry and exit at border passes, it is completely different when it comes to those crossing the border illegally.

That is a weakness in the country's defenses against imported infections that needs to be addressed.

Since the difficult terrain in Yunnan's mountainous border regions considerably adds to the difficulty in exerting effective control, there might be no better precaution than the province ordering a broad freeze on people crossing the border.

What has happened to Ruili as a result of two illegal immigrants infected with the highly contagious virus entering illegally — the shutting down of the entire city — is a timely reminder the fight against the virus must be on a war footing wherever it launches a new offensive.