WUHAN, April 8 (Xinhua) - After being put into lockdown for almost 11 weeks, Wuhan, the epicenter of the novel coronavirus outbreak in China, is finally reconnected with the rest of the world on Wednesday. 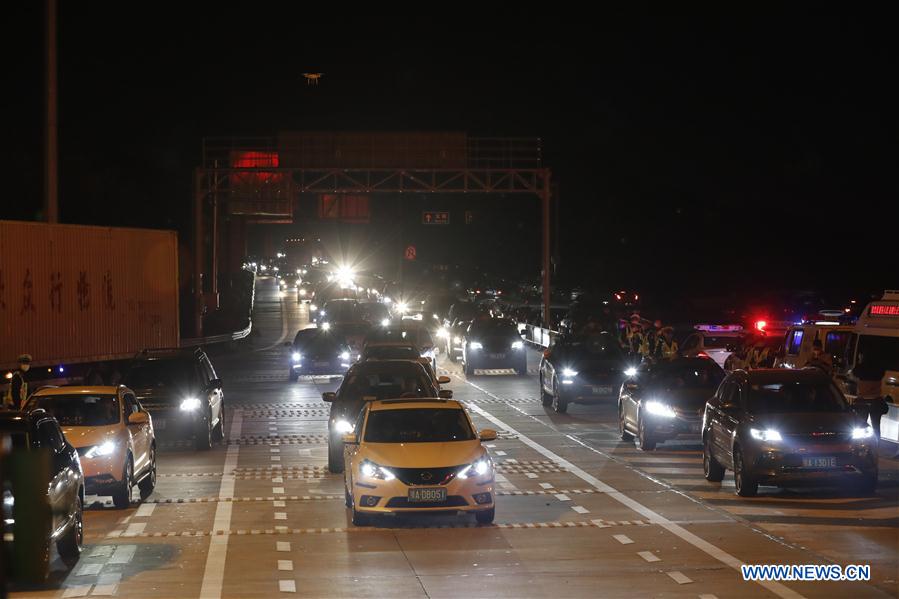 Though the city needs to stay vigilant to prevent a resurgence, its hard-won preliminary victory is symbolic of China's nationwide anti-virus efforts and offers a glimpse of hope to the world, as almost half the global population is confined to some degree.

Three months ago, the capital of Hubei Province was only beginning to realize the harm of the previously unknown virus. By then, COVID-19 was still a "pneumonia of unknown cause." In the days that followed, the people there bore the brunt of the highly infectious disease.

On Jan. 11, it reported the first death from the virus in China. Starting from Jan. 23, two days before the Spring Festival, outbound travel restrictions were imposed on the city to halt the spread of the virus.

Unusual circumstances called for exceptional decisions. The Wuhan lockdown decision, as advised by epidemiologists and announced by political leaders, was without precedent, and turned out to be completely effective in containing the transmission. The drastic quarantine measures helped a city emerge from the hold of the health threat.

In Wuhan and beyond, the Chinese authorities took the most decisive and stringent measures to keep the number of infections to a minimum.

In the resolute fight against the coronavirus, the people in Wuhan made great sacrifices. The world has seen how quickly the virus can overwhelm health care systems not only in Wuhan, but in global hubs of similar size. The city famed for its delightful spring of cherry blossoms witnessed heartbreaking moments of lives lost and fear and pain endured. Through the hard times, people have a soft spot in their hearts for the myriad acts of sacrifice and heroism that sustained the city through the crisis.

As the epicenter of the virus outbreak, a blocked Wuhan bought time for the country and the world. Its people, who have fought a brave war against the common enemy of humanity, deserve sympathy and respect.

Though shuttered down, the city never halted. Frontline medics, researchers, police officers, public servants, social workers, couriers and volunteers hardly stopped working. At the core of its anti-virus battle has been an all-out people's war.

Reinforcements, supplies, donations and all forms of help consistently arrived in Wuhan from all over the country. Two makeshift hospitals were built in two weeks. Over 35,500 medical staff came to help the virus fight.

With the staunch support of the whole country, Wuhan gets better by the day. A total of 46,991 people have recovered from the disease.

Globally, the virus, with stealthy spread, has thrown the world in upheaval and plunged one city after another into the same emptiness Wuhan used to endure. The disease not only attacks the human body, but also the global order of life. But as in Wuhan, the fight goes on, lives will return to normal, and cities will regain vitality. Where there is life, there is hope.

An auto hub in China, Wuhan is also home to high-tech industries such as chip-making. The resumption of work and production has far exceeded expectations. On Saturday, its work resumption rate had surpassed 97 percent.

About 55,000 people plan to leave Wuhan by train and about 1.8 million cars are expected to hit the roads on Wednesday.

Wuhan tided over the most testing hours and is prepared for new challenges. Relaxing prohibition measures should by no means lead to softened epidemic control efforts. With the removal of lockdown measures, it is seeking to strike a delicate balance between maintaining an effective epidemic response and restoring ordinary life and work.

The past 76 days are a memorable chapter in the history of the city, which has been battered by a formidable enemy but is regaining its strength.

Wuhan's cautious unblocking is far from a final victory over the health threat, but it leads us to believe that with determination, persistence and concerted efforts, a global victory will eventually be secured.