BEIJING, Aug. 9 (Xinhua) -- Three think tanks on Monday released a research report exposing the truth about the U.S. response to the COVID-19 pandemic. 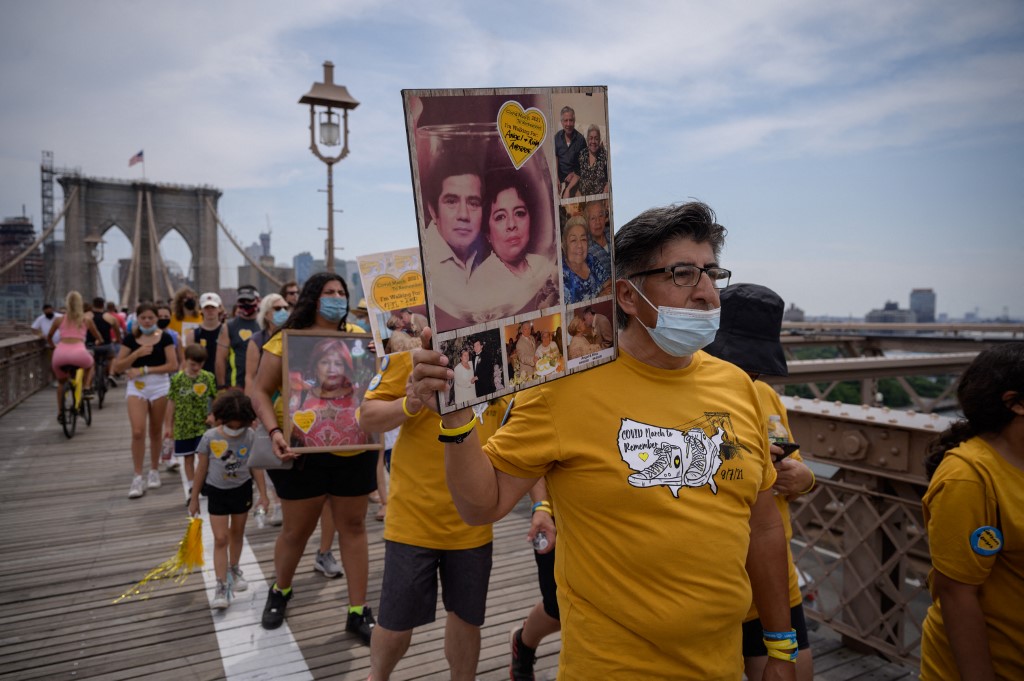 Relatives who lost family members to covid-19 join survivors, community members, and front-line health workers as they attend a 'March to Remember' over the Brooklyn Bridge, New York on August 7, 2021. (Photo: AFP)

The report was written in response to some U.S. media rating the United States as "number one in the world" for its response to the COVID-19 pandemic.

Titled "'America Ranked First'?! The Truth about America's Fight against COVID-19," the research looked into the topic from five aspects, namely "For partisan competitions, not for the lives," "Anti-science and against common-sense measures," "System failures result in the pandemic difficult to control," "The pandemic exacerbated the social gap" and "Willful destruction of global resistance to the pandemic."

The report was jointly released by the Chongyang Institute for Financial Studies of the Renmin University of China (RDCY), the Taihe Institute and the Intellisia Institute.

Under the double blow of the virus and man-made calamities, the pandemic in the United States has not been effectively controlled so far, the report said.

It added that the U.S. government has run contrary to science and common sense in multiple aspects including pandemic prevention and control and source investigation, which were the direct reasons why the United States is a "failed country in fighting the pandemic."

The report said the United States has covered up the truth and politicized issues concerning the anti-pandemic fight, while overdepending on monetary measures in the fight.

Amid the pandemic, the wealth of the rich in the United States has ballooned, whereas the lives of ordinary people have deteriorated, the U.S. society has been torn apart and racial tensions have intensified, the report said.

Noting that more than 20 million U.S. citizens were still traveling abroad in the wake of the COVID-19 outbreak, the report said the United States bears unshirkable responsibility in the global spread of the pandemic.

It also raised several questions such as whether the so-called unexplained "respiratory disease" or "white lung disease" of unknown cause in the United States is in fact COVID-19, what kind of research is being done at Fort Detrick and other biological laboratories in the country, and whether it is related to COVID-19.

Wang Wen, executive dean of the RDCY, said that the act of some U.S. media rating the United States as "number one in the world" for its response to the COVID-19 pandemic, flying in the face of stark reality, will not help future generations to look at the current world history realistically and objectively.

Wang also expressed hope that the research report will help more people recognize the truth, and help other countries learn from the blunders of the United States in a bid to better respond to similar public health crises.