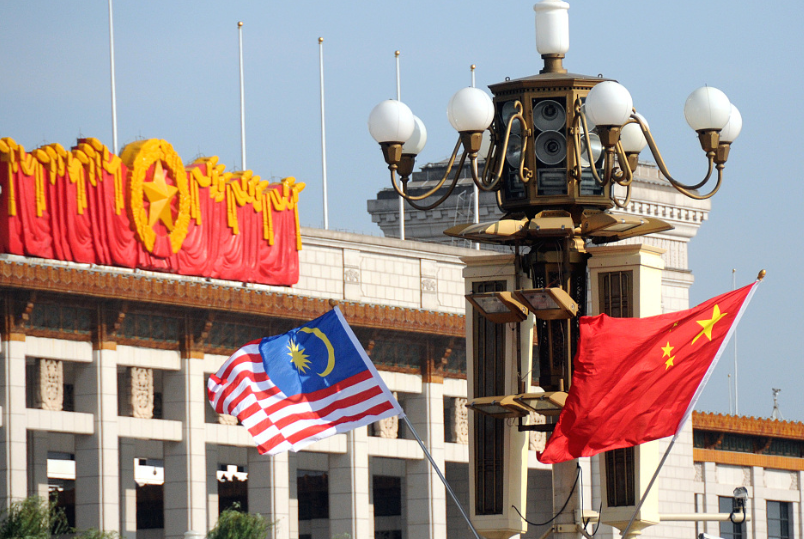 Chinese and Malaysian national flags flutter on a lamppost in front of the Tian'anmen Rostrum during the visit of Malaysian Prime Minister Mahathir bin Mohamad in Beijing on Aug 19, 2018. (Photo: VCG)

Malaysian Prime Minister Mahathir Mohamad profusely praised China on Monday for how it has transformed itself from a developing country with very poor capacity into a technological leader able to send a probe to the moon within just a short span of time.

"They were behind us before, but now they are ahead of us," he said at a local convention meant to promote Malaysia's image as a rising Asian economy. He attributed China's success to its hardworking people and its resolve to realize the objective of being a fully-developed country, a rich country that "nobody can threaten or look down upon".

As the world's oldest incumbent head of government, the 93-year-old certainly has gained a lot of insights over the years when it comes to the development path China has taken and the country's intentions toward its international partners. That's why the veteran politician supports China's Belt and Road Initiative, and reportedly will lead the Malaysian delegation at the second Belt and Road Forum for International Cooperation to be held in Beijing later this month.

But that does not mean the two countries always see eye to eye with each other. Bilateral relations hit a snag last year when shortly after taking office, Mahathir canceled two major infrastructure projects in Malaysia that were part of the Belt and Road Initiative — a railway and a natural gas pipeline with a combined worth of about $22 billion — citing their high costs and corruption allegations against his predecessor as the reasons for the decision.

This was seen by some as an attempt by Malaysia to pivot away from China amid the alleged threat of "neocolonialism", even though Mahathir has rejected such a claim on many occasions, and has reaffirmed Malaysia's policy of retaining and improving its relationship with China — its biggest investor and trading partner.

The friendly relations between the two countries can be traced back to the 15th century. And in 1974, Malaysia became the first member of the Association of Southeast Asian Nations to establish diplomatic relations with China. Such a long-standing relationship is resilient enough to withstand temporary difficulties and even setbacks. There are already reports that the two governments are in talks over the canceled railway project, with the possibility of it being revived on a smaller scale.

China has always striven for win-win outcomes, and never sought a beggar-thy-neighbor policy when developing friendly relations with other nations. So long as the two countries pursue shared growth through consultation and collaboration and observe market principles and international rules, any problems that appear can be resolved to the benefit of both.