Rice turning a blind eye to racial divide in Washington 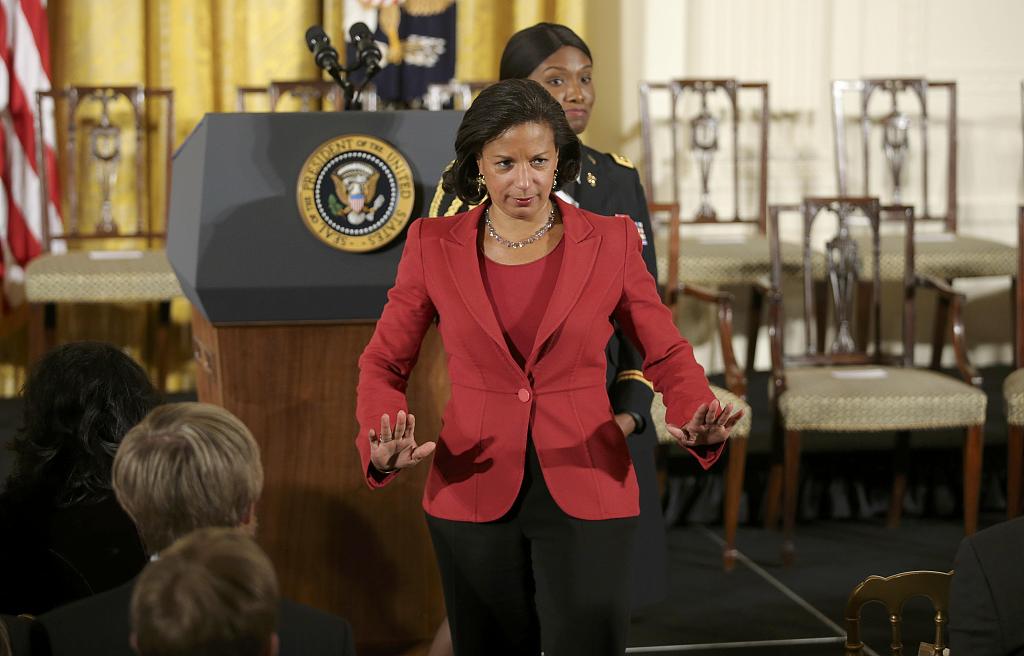 U.S. National Security Advisor Susan Rice heads to her seat before a ceremony awarding the Presidential Medal of Freedom to various receipients in the East Room of the White House in Washington, U.S., November 22, 2016. (File photo: VCG)

Former US national security advisor Susan Rice was in the spotlight earlier this week for calling Chinese diplomat Zhao Lijian a "racist" after the latter described on Twitter the racial divide in Washington. Rice's charge, however, shows her disconnect with reality.

Rice, born and still living in Washington, should know well the serious racial issues haunting the United States capital, although unlike most African-Americans there, she grew up in a well-to-do family and neighborhood and attended the National Cathedral School, an elite private girls' school. She later studied at Stanford and Oxford, where she obtained her PhD and has since had a successful career.

But her success story is not representative of the African-American population either in Washington or other US cities. The fact that Barack Obama, an African-American, was elected US president, something truly worth celebrating, does not mean the US is free of racial problems.

On the contrary, a Gallup poll in February showed that 59 percent of blacks describe current black-white relations as bad, up from 33 percent in 2013. And according to a Pew survey in April, more than 40 percent of the respondents said the US hasn't made enough progress toward racial equality. Plus, there is skepticism, especially among black people, that blacks will ever enjoy the same rights as whites.

If these facts are not enough, Rice, who was a senior fellow at the Brookings Institution from 2002 to 2009, should read the research reports that some of her former colleagues worked on.

A report in December 2017 by Brookings scholar Jenny Schuetz said metropolitan areas in the US are racially segregated. As for Washington, the report said the divide is east-west, with mostly blacks living on the eastern side of the District of Columbia and the adjacent suburb of Prince George's County, Maryland.

A 2015 report by Brookings scholars Stuart Butler and Jonathan Grabinsky stated that while racial segregation has been declining over the last 50 years in the larger metropolitan areas, there are exceptions to this rule, one of which is Washington. It said "there remains a stark, persistent, white-black racial divide" from the rate of poverty to the level of education.

Rice can also compare notes with her current colleagues, such as Derek Hyra, an associate professor at the American University, where Rice is now a distinguished visiting research fellow in its School of International Service. I cherish my chat with Hyra on the racial issue two years ago in Washington and learned a lot from his book, Race, Class, and Politics in the Cappuccino City.

Rice may call me biased if I share my observations on the racial issue after living and working in Washington for five years. But fellow journalists have covered extensively the racial segregation in Washington.

Aaron Wiener, a veteran reporter at the Washington City Paper, described Washington as the sixth most segregated city. "DC remains wildly segregated, with an overwhelming white majority west of Rock Creek Park and an overwhelming black majority east of the Anacostia River ... DC's racial divide is evident to anyone who's spent time in the city. It shows up in every facet of District life, including voting patterns, home purchase, and school choice," Wiener wrote in an article.

Senator Bernie Sanders, during his campaign for the 2020 US presidential election, made it a priority to repair the US public education system and end school segregation and racial discrimination against students.

Rice would do better to devote time to such campaigns and fix the racial problems rather than distracting public attention by making a fuss over Zhao's tweet.