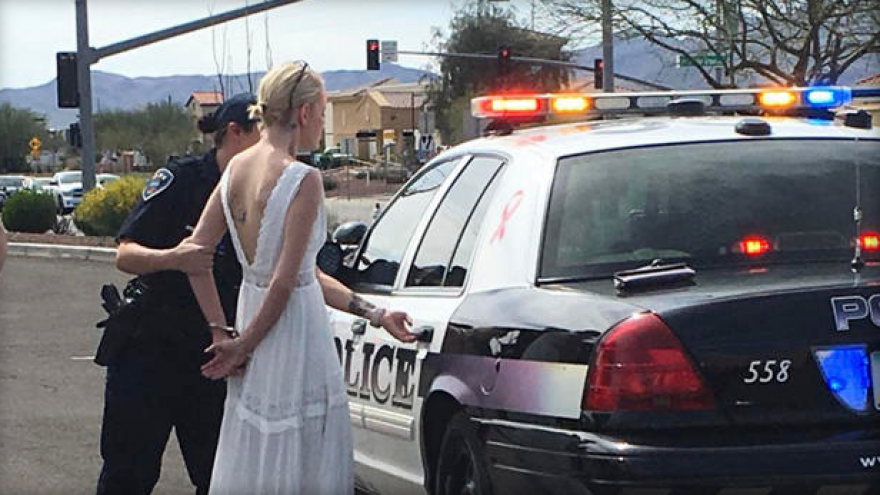 A bride in Arizona, a US state known for its harsh DUI laws, is arrested on suspicion of DUI. (Photo: AP)

In the US, intoxicated drivers provide a revenue stream that cities cannot afford to lose. Laws and regulations aimed at Driving Under the Influence (DUI) violations are revenue pathways designed to generate money for a variety of workforce sectors. The irony alone makes it look like a good problem to have. Viewed as the scourge of society, DUI offenders arguably contribute more financially to a city than any demographic. According to the National Highway Traffic Safety Administration (NHTSA), accidents and fatalities related to DUI violations for 2010 totaled $44 billion.

In the 1980s, drunken driving emerged to the forefront of national concern. What was once a careless action that went unnoticed had become a national crisis well before the decade was over. Media hysteria and middle-class outrage led to heavier penalties and fines that saw DUI rates skyrocket rather than plummet. During this period, the foundation was laid for what is now a multi-billion-dollar revenue stream US cities cannot live without.

From lawyers to tow truck companies, many benefit financially when a DUI arrest is made. Auto insurance providers are the biggest winners. In San Bernadino, California, DUI offenders can expect a 135 percent increase in insurance premiums for their first offense, while the national average is roughly 75 percent.

Mothers Against Drunk Driving (MADD), a non-profit organization founded in 1980, almost single-handedly gave birth to the DUI. The group influenced Congressional leaders to raise the legal drinking age from 18 to 21. They also played an influential role in lowering the national standard blood alcohol content (BAC) level from .10 to .08 percent, the amount of alcohol needed in a person's blood stream for them to be considered intoxicated in the eyes of the law. States that failed to comply with the new regulations jeopardized their federal funding for highway infrastructure repair.

The closest thing US society has to what could be considered a solution to an almost unsolvable problem is the ride hail industry. Uber, and to a much lesser degree, Lyft, dominate the nation as smaller companies have started to spring up big cities.

Unfortunately, with the amount of negative press Uber has received just this year alone, it would be easy to think the company was a threat to society more than anything else.

The recent spate of suicides among yellow cab drivers in the Big Apple was partially blamed on Uber, even though the city is home to three other ride share companies.

According to a 2017 report from the New York City Taxi and Limousine Commission, the app-based for-hire vehicle (FHV) sector consisted of 80,000 cars competing against 13,500 yellow cabs.

Uber’s arrival in New York couldn't have happened at a better time. In 2010, the New York Times reported that 36,000 cab drivers had overcharged customers at least once, with another 3,000 guilty of doing it 100 times or more. Dishonest cabbies had scammed a combined total of $8.3 million from unsuspecting passengers.  New Yorkers, angry they had been ripped off, were primed for an alternative.

California was the pioneering state and the first to establish a DUI fine set at $375. Now, first offenders pay roughly $15,000 over the course of a year, and only if they haven’t caused any damage to property or harmed human life.

Reports hardly agree with one another regarding Uber’s influence on DUIs, except for when it comes to alcohol-related car accidents, which have plummeted nationwide. Meanwhile, most cities have seen little change in DUI-related fatalities which proves that people do not respond to harsh penalties.

In Arizona, drivers who refuse to take a field sobriety test can have their license revoked for one year, whether or not they’ve had anything to drink. And in the state of Texas, 1 out of every 20 prisoners behind bars is serving time due to alcohol-related offenses, while over 40 inmates are serving life sentences for multiple DUI violations.

The fact there hasn’t been a significant reduction in alcohol-related car fatalities since the advent of ridesharing suggests that society remains incapable of learning from the past or from the mistakes of others. Some believed that AI technology would have helped cross that bridge, but ride-share copporate decision-makers cooled on the idea after a self-driving Uber car killed a pedestrian in Arizona.

Yellow cab drivers may want to start thinking of ways to adapt before they become the next victim of the rideshare industry.