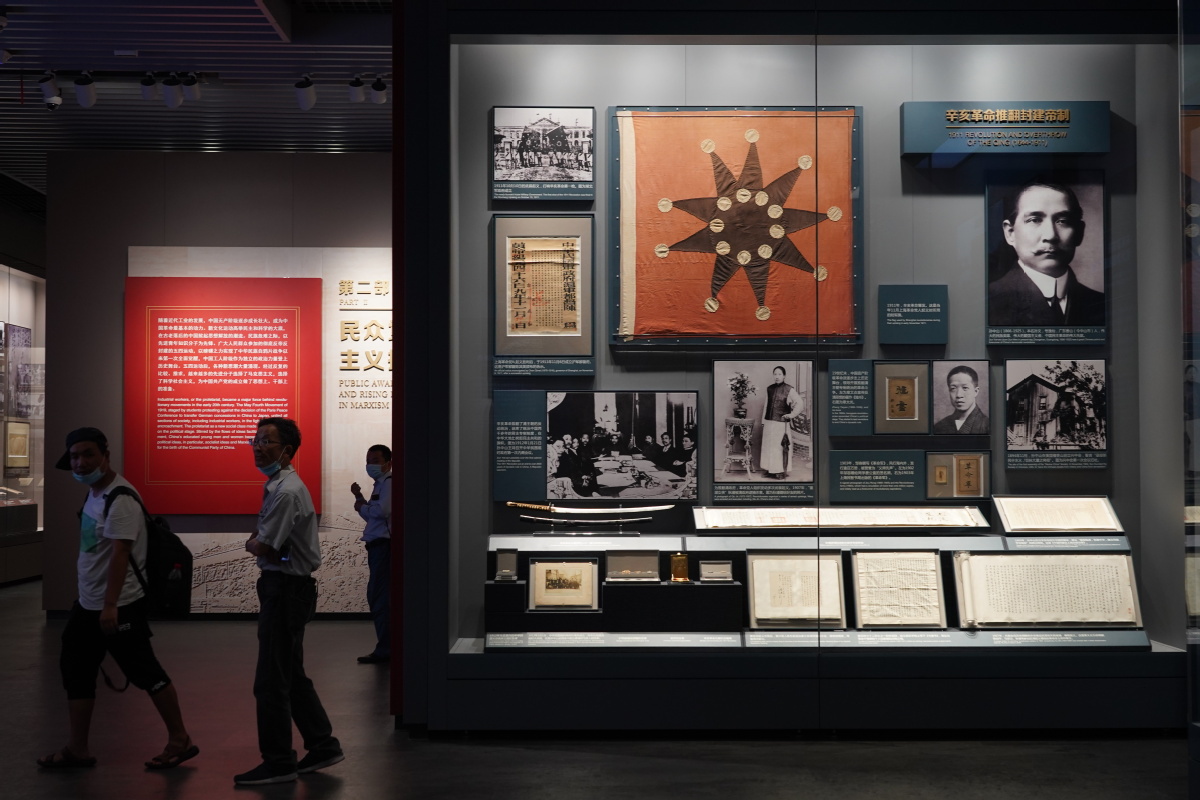 In the important speech to mark the 110th anniversary of the Revolution of 1911, President Xi Jinping summarized the historical experiences from the past century. To achieve national rejuvenation, China must stick to the strong leadership of the Communist Party of China and socialism with Chinese characteristics, he said.

The 1911 Revolution overthrew the Qing Dynasty (1644-1911) and ended several thousand year-old monarchy in China. Since then, the Chinese people have been exploring ways to establish democracy according to the existing conditions in the country.

After the Opium War in 1840, China gradually became a semi-colonial and semi-feudal society and suffered unprecedented disasters. To help the nation to overcome the crisis in the second half of the 19th century, countless Chinese people with lofty ideals worked tirelessly to find a political path that best suited China's national conditions.

The Taiping Rebellion, the 1898 Reform Movement, the Boxer Rebellion and the 1911 Revolution broke out one after another, and different national plans were introduced, but they all failed in boosting China's development and ending the Chinese people's miseries. At the time, China desperately needed new ideas to lead the national salvation movement and a new organization to rally revolutionary forces.

The Communist Party of China, as the most steadfast supporters,loyal collaborators,and faithful successors of great revolutionary Sun Yat-sen, has since the beginning regarded making the Chinese people the masters of the country and realizing national rejuvenation as its prime goal. The CPC led the Chinese people to realize national independence, found New China in 1949, and put China on the path to rapid socioeconomic development. Now China's national rejuvenation is an inevitable trend.

In more than 40 years of reform and opening-up, the Party has not only united people of all ethnic groups but also made unremitting efforts to establish socialist democracy, set the development goal and direction of democratic politics, paved the road to socialism with Chinese characteristics.

The most important thing China has done in order to build socialist democracy is improving the system of people's congresses. The people's congress system is the historical result of the transformation and development of Chinese society over the past century and the path the Chinese people have chosen to become the masters of their destiny. And the experience of the past more than 60 years shows the people's congress system is best suited to China's national conditions, reflects the nature of a socialist country, ensures the people are the masters of the country, and promotes the realization of national rejuvenation.

Given that China is a developing country with a large population and faces many challenges, the development of democracy in the country should be conducive to social stability and promote good governance. This is the essence of a people-centered approach and also the most fundamental requirement to meet the interests of the overwhelming majority of the Chinese people.

Since the launch of reform and opening-up, China has been promoting socialism with Chinese characteristics, combining the advantages of electoral democracy and deliberative democracy to achieve the goals of industrialization and modernization with the aim of better safeguarding people's rights. It has also strengthened the institutions and laws to promote democracy.

In his speech on the centenary of the founding of the Party, CPC Central Committee General Secretary Xi Jinping said China will develop "whole-process people's democracy". Whole-process democracy is the summarization of the essential features of China's democratic system — in which the people run the country — and the experience and wisdom of the Party in leading the people to explore and realize democracy. The pursuit of whole-process democracy has deepened people's understanding of the nature and purpose of the CPC, and made clear the characteristics and strengths of China's socialist democracy.

Whether or not democracy is fully guaranteed depends not only on the democratic rights written in the Constitution but also on whether the people have the democratic rights to participate in the political activities. China's socialist democracy is a whole-process democracy that incorporates people's practices and has sound institutional procedures and guarantees. Democracy also depends on whether the people have the right to vote and supervise the government, and whether they have the right to participate in State affairs and public administration.

Whole-process democracy is an integrated system of democratic practices that includes election, consultation, and deliberation-centered decision-making and supervision. It ensures that the people are the masters of the country, and can supervise the State's power and functions.

Democracy is not a monopoly of certain powers. Compared with the democratic systems followed by the West, whole-process democracy can better safeguard the democratic rights of the people, promote development, and help improve governance quality and expand governance capacity. Whole-process democracy's aim is also to identify the greatest common divisor of society, and pursues vitality, and social harmony and stability.

From people's democracy to socialist democracy with Chinese characteristics and whole-process democracy, what the Party has pursued over the past 100 years is the great ideal of rejuvenation of the Chinese nation, which reflects its faith in the Chinese people and its determination to improve their lives and livelihoods.

The country's democratic practices have not only enriched the scope and depth of socialism with Chinese characteristics and its political system, but also upheld and promoted the common values of humankind. Only through the right path that suits China's conditions, can the great dream of national rejuvenation be achieved.

The author is a research fellow with the Institute of Political Science, Chinese Academy of Social Sciences.