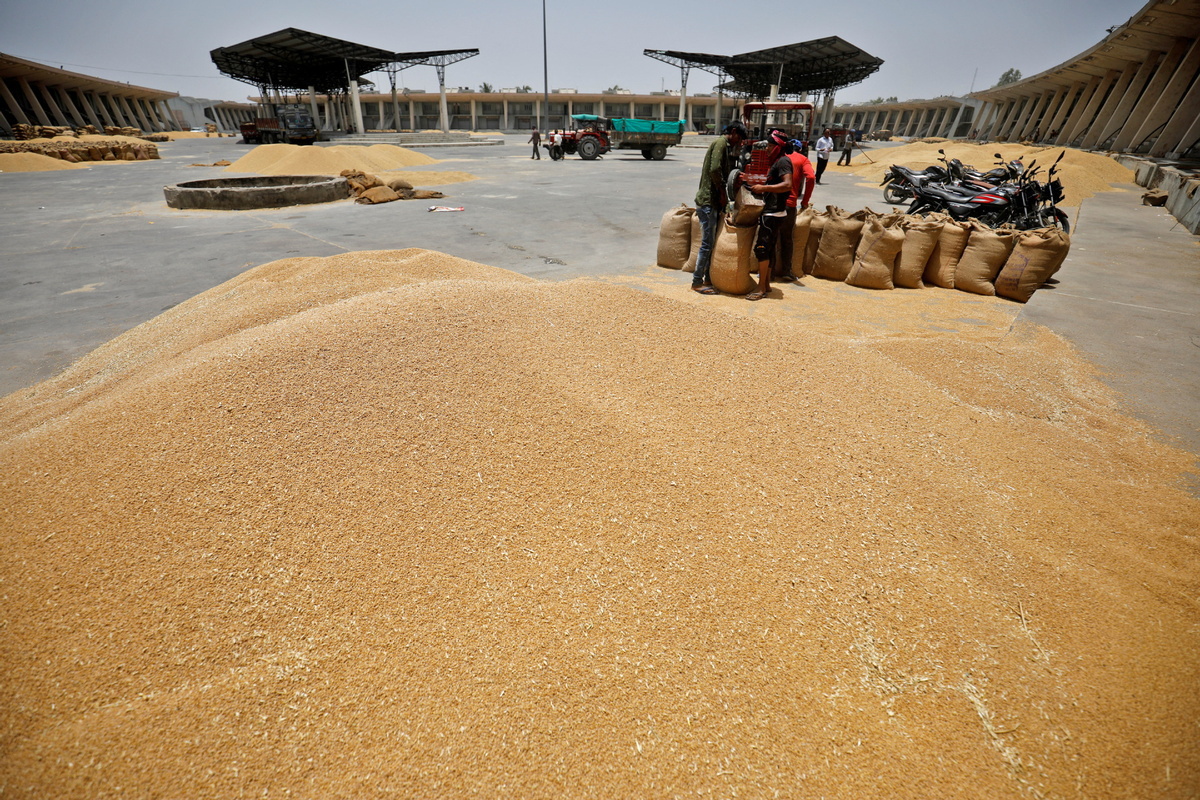 Workers fill sacks with wheat at the market yard of the Agriculture Product Marketing Committee (APMC) on the outskirts of Ahmedabad, India, May 16, 2022. Photo/Agencies

This might further fuel global inflation. India exports rice to around 150 countries and regions, and its rice exports account for 41 percent of the global rice trade. Vietnam and Thailand account for about 24 percent combined.

Rice prices are generally more stable than those of wheat, corn and soybeans. But the rice price this year has been less stable due to a number of factors. The Russia-Ukraine conflict has pushed global chemical fertilizer prices to record highs, which has dramatically raised the cost of growing rice. Extreme weather conditions are another major cause. For instance, parts of India's rice growing regions have been hit by a hot and dry summer, with monsoon rainfall about 40 percent below average, resulting in an 8 percent reduction in the country's rice acreage.

And to ensure the supply of feed for the more economically valuable livestock sector at a time of instability in global agricultural markets, rice is also used as a feed substitute.

Although the global stock of rice remains at a historical high-level according to the Food and Agriculture Organization of the United Nations, the price hikes of the three major rice exporters will still have an inflationary effect, particularly on the main rice importers in Asia, such as the Philippines and Indonesia, where rice and rice products account for 25 percent and 15 percent of their grain consumption respectively.

Although the inflation pressure might be regional for the time being, no one can be sure whether this wave of rice price rises will trigger a global food crisis or not as the uncertainties and risks leading to that are still accumulating.

The conflict between Russia and Ukraine will necessarily reduce wheat output next year. If the global wheat supply chain is seriously disrupted, people will rely more on rice instead, and the increased demand might push up the prices of rice and other grains further and subject Africa to an acute food crisis.

Extreme weather conditions will continue to seriously affect the world's grain production. For instance, the output of corn in the United States, whose corn exports account for 40 percent of global corn trade, plummeted to a three-year low due to serious droughts this year.

Also, the major grain exporters may take the initiative to raise food prices to try and take this opportunity to gain more say in the global food supply chain.