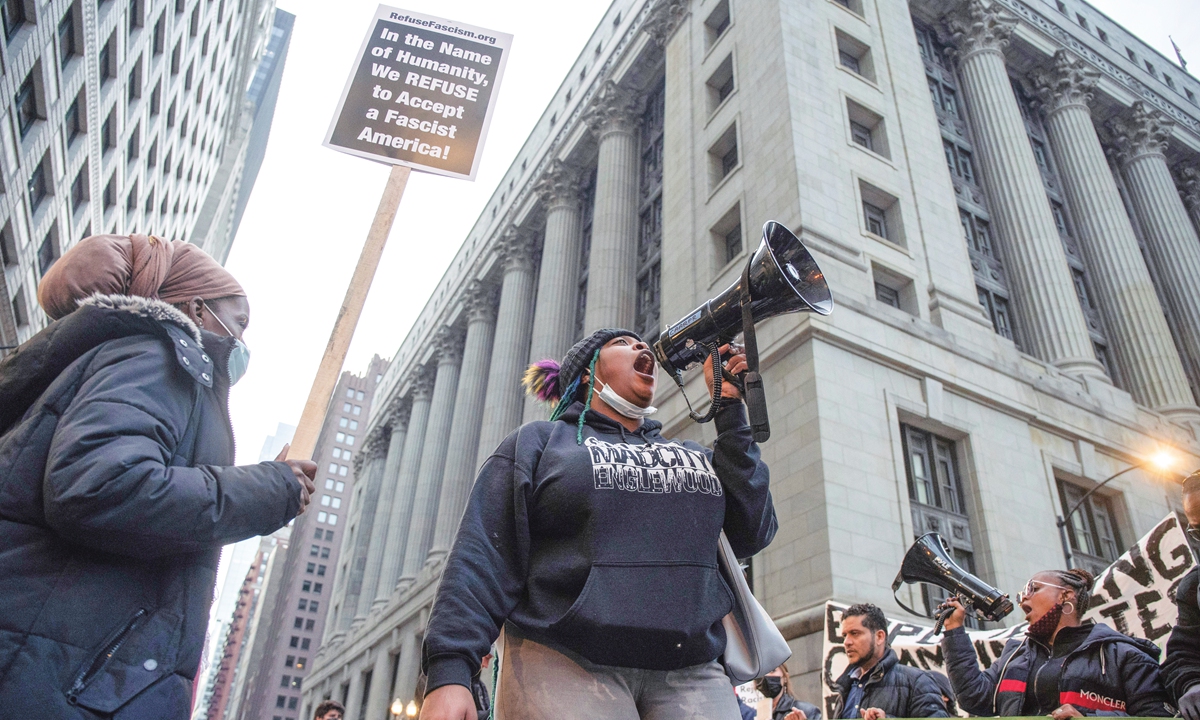 An activist chants in front of City Hall in the Loop to protest the acquittal of Kyle Rittenhouse on November 20, 2021, in Chicago. Rittenhouse was acquitted of all charges one day earlier after testifying he acted in self-defense in the deadly Kenosha shootings that became a flashpoint in the debate over guns, vigilantism and racial injustice in the US. (Photo: VCG)

The Kyle Rittenhouse case has resulted in a new wave of protests across the US, some of which have escalated into riots, after the judicial case became deeply politicized under the intense political struggle between the Democrats and the Republicans.

The fallout from the not-guilty verdict in the jury trial exposes that the "democratic political system" in the US has failed to heal the "illness of social polarization and racial divergence," said Chinese experts on Sunday, predicting that similar cases and riots could increase during the 2022 midterm elections and the 2024 presidential election.

Chinese analysts said that cases such as this which could spark conflicts and violence in the US will increase as both the Democrats and the Republicans want to make the best use of the divergence between left and right, black and white, rather than heal and unify the society, because the two parties survive on and profit from worsening social divisions.

This is an illness that is deeply rooted in the bones of the US' two-party political system. "US democracy" is losing the ability to solve such a problem and more similar cases will take place in the future, observers noted.

Rittenhouse was acquitted of all charges Friday after testifying he acted in self-defense in the deadly Kenosha shootings that became a flashpoint in the debate over guns, vigilantism and racial injustice in the US, the AP reported on Saturday US time.

According to US media NPR, on Friday evening, protests broke out in several cities across the country. Authorities in Portland, Oregon, referred to one incident near the Multnomah County Justice Center as a riot and warned all present to vacate the area or risk being met with force. Portland Police Bureau said a "significant part of the crowd" were engaging in "violent, destructive behavior" that included breaking windows and throwing objects at officers on the scene.

The Chinese General Consulate in San Francisco issued a reminder in Chinese language to Chinese nationals in the consular district on Saturday local time, asking them to be aware of the current situation caused by the Rittenhouse case and stay away from protests and gatherings and avoid unnecessary conflict with locals.

The verdict in the politically combustible case was met with anger and disappointment from those who saw Rittenhouse as a vigilante and a wannabe cop, and relief and a sense of vindication from those who regarded him as a patriot who took a stand against lawlessness and exercised his Second Amendment right to carry a gun and to defend himself. Supporters donated more than $2 million toward his legal defense, according to US media.

US President Joe Biden called for calm, saying that while the outcome of the case "will leave many Americans feeling angry and concerned, myself included, we must acknowledge that the jury has spoken."

Biden is facing a very difficult situation because on the one hand he needs to please his Democratic base and swing voters who have sympathies toward minorities, but on the other hand he knows the majority of the US voters are white and if he criticizes the verdict too strongly it could offend those swing voters who support the verdict. Under the current political situation, the two major parties in the US will vie for every vote, experts said.

A criminal trial should have had its own judgment criteria and strictly follow legal procedures, but as partisan rivalry in the US intensifies, the Rittenhouse case turned into a political issue with racial conflict and gun control involved, and therefore became a stage for the Democrats and the Republicans to propagate their political views and attack each other, Xin Qiang, deputy director of the Center for American Studies at Fudan University, said on Sunday.

Reverend Jesse Jackson, the longtime civil rights leader, said the verdict throws into doubt the safety of people who protest in support of black Americans, the AP reported. "It seems to me that it's open season on human rights demonstrators," he said.

Rittenhouse was charged with homicide, attempted homicide and reckless endangering for killing two men and wounding a third with an AR-style semi-automatic rifle in the summer of 2020 during a tumultuous night of protests over the shooting of a black man, Jacob Blake, by a white Kenosha police officer.

Rittenhouse, a then-17-year-old former police youth cadet, said that he went to Kenosha to protect property from rioters but that he came under attack and feared for his life. He is white, as were those he shot. The anonymous jury, whose racial makeup was not disclosed by the court, appeared to be overwhelmingly white, AP reported.

Lü Xiang, a research fellow at the Chinese Academy of Social Sciences, told the Global Times on Sunday that this case is an epitome of the current US political and social reality. The jury, which appeared to be overwhelmingly white, reflects the fact that most US voters might not dare to challenge political correctness openly, but they will use their vote or power in the jury to express their opinions.

"And maybe this shows that most American whites don't like political correctness, and the verdict is sending an encouraging signal to conservative white people with guns in future conflicts with black or other ethnic minorities," he said.

Some Chinese web users found the verdict hard to understand, as some said on the Chinese twitter-like social media platform Sina Weibo, "What if Rittenhouse killed two African Americans rather than white men? Would he be found guilty or would the verdict remain the same?"

Former US president Donald Trump, who at the time of the shootings said it appeared Rittenhouse had been "very violently attacked," issued a statement Friday congratulating Rittenhouse on the verdict, adding "if that's not self-defense, nothing is!"

Lü said a former US president sending a congratulatory statement on the verdict of a judicial case is very unusual, and it means Trump is capitalizing on the political benefit in the case, and he wants to use his influence to further worsen the divergences within the US society. The more division between the left and right or black and white, the more likely it will be for politicians like him to win future elections.

Democrats and Republicans will always stand their ground and split society on sensitive social issues like a shooting case that involves race issues, Xin noted.

"As a result, it is more and more difficult to solve social problems in the US properly and satisfactorily if they are politicized, leading to the failure of American governance," Xin told the Global Times.

An increasing number of incidents similar to the Rittenhouse case and their resulting social contradictions will continue to take place in the US, Xin predicts. "With more social issues being politicized under partisan rivalry, the US will suffer worse and more intense social divergence," he said.