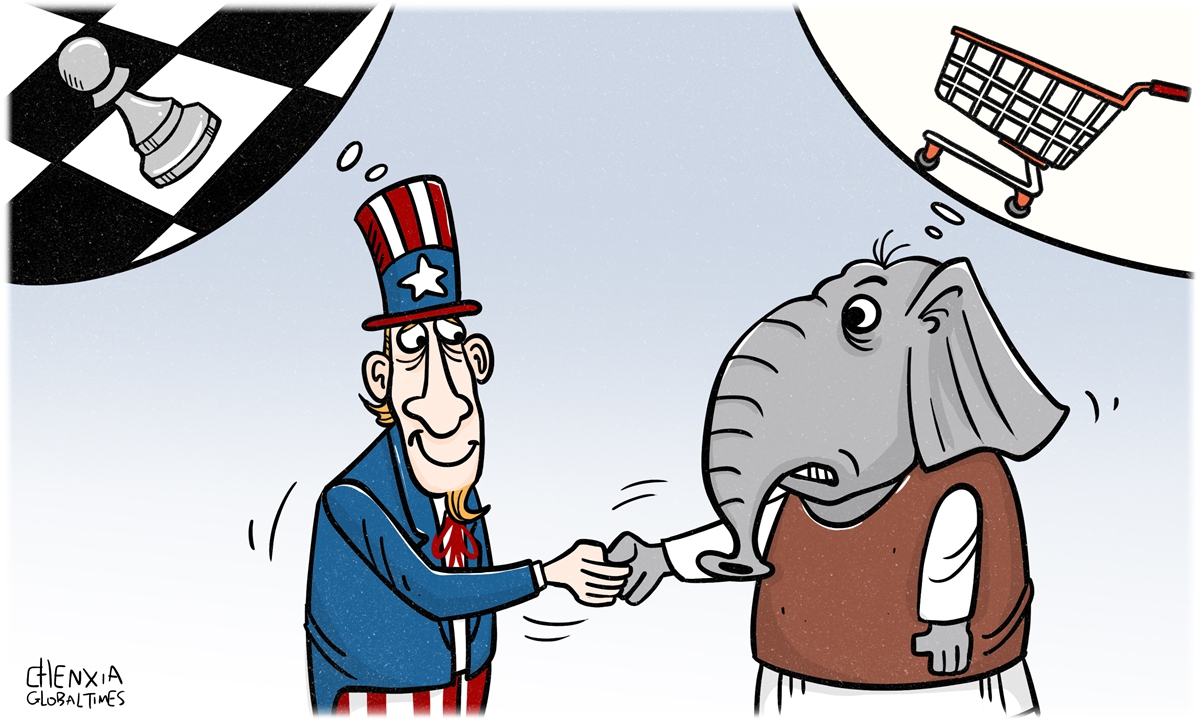 It is not surprising that some Indian media outlets are adopting an overly optimistic outlook for economic ties between India and the US, after some reports showed the US has surpassed China to become India's top trading partner in 2021-22. However, those media outlets may have deliberately overlooked a fact: The faster-than-expected widening in the US' trade deficit with India, a hidden danger to the bilateral ties and to India.

The US is one of the few economies with which India has a trade surplus. According to the Press Trust of India (PTI), India's exports to the US increased to $76.11 billion in 2021-22, while imports rose to $43.31 billion at the same time. The upbeat exports and imports data has provided a sense of optimism. "India is emerging as a trusted trading partner," Federation of Indian Export Organisations vice president Khalid Khan was quoted as saying, adding that global firms are reducing their dependence on China for their supplies and are diversifying business into other countries, including India.

Chinese enterprises are not afraid of competition. We are pleased to see a constant increase of India's presence in the US market. This does not mean the failure of Chinese companies because international trade is not a zero-sum game. India deserves applause for its efforts to bump up exports but the side effects deserve attention too: There is likely to be more controversy over trade imbalance as India becomes a more important trading partner for the US.

Trade between China and the US can be used as a reference point. Growth in US trade deficit with China has long been blamed by US politicians for resulting in the loss of US jobs. Citing the massive trade deficit with China, former US President Donald Trump launched a trade war and promised to bring back manufacturing jobs. Will India face mounting pressure from the US to reduce its trade surplus? The answer is probably yes.

India has been invited to join the Indo-Pacific Economic Framework (IPEF), a newly proposed trade agreement aimed at enhancing US involvement in Asia. India's joining of IPEF offers the US an opportunity to further open up the Indian market.

As US politicians continue to talk up a vision of Indo-Pacific cooperation, Washington may want to make a gesture to convince New Delhi that the two countries have strong economic complementarity, but what the US can offer may be just lip service, and instead, the US may want to gain more benefits.

As bilateral ties between India and the US grow increasingly complicated, India should enhance its own economic strength, which will be a key bargaining chip at the negotiating table. India has had close industrial links with Asia-Pacific economies. If it wants to emerge as the world's manufacturing hub, India has to accelerate its integration into the Asia-Pacific industrial chain. Strengthening cooperation with China can help India achieve this goal.