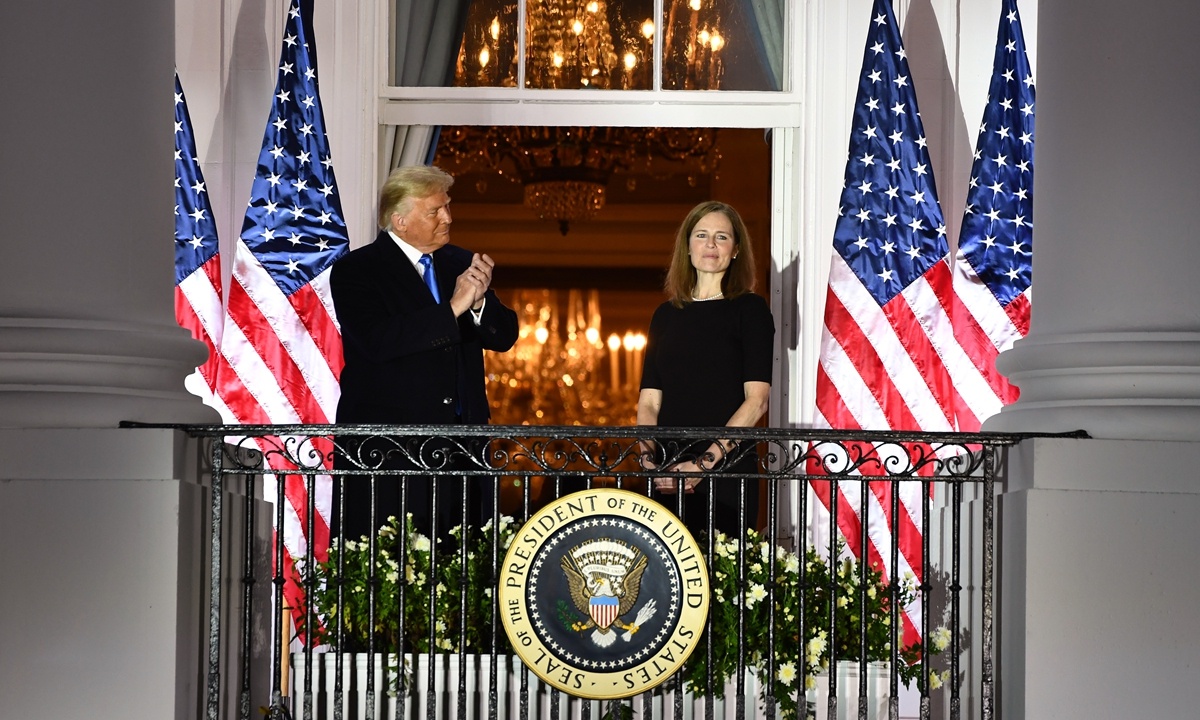 US President Donald Trump applauds Judge Amy Coney Barrett on the Truman Balcony after she was sworn in as a US Supreme Court Associate Justice in Washington DC on Monday. (Photo: AFP)

The Republican-controlled Senate on Monday confirmed Judge Amy Coney Barrett, US President Donald Trump's third nominee, as a member of the US Supreme Court in a 52-48 vote, only eight days ahead of the presidential election.

All Democratic senators voted against her confirmation. The Associated Press said no other Supreme Court justice has been confirmed on a recorded vote with no support from the minority party within at least 150 years. Democrats expressed their dissatisfaction toward Barrett's rushed confirmation. They claimed that confirming a nominee for the seat should have been left up to the winner of the election.

Many wonder what pushed the Trump administration to make such a rushed decision. Barrett's confirmation ranks her as one of the most-rushed since the 1970s at barely a month, according to media reports. This is because the Trump administration hoped Barrett could be confirmed before the presidential election on November 3 so that the Republicans could gain an advantage in possible legal disputes that may occur after the election. President Trump has clearly expressed his intent that he wanted Barrett seated before the election so she could lend her vote in case of a legal dispute over the balloting, the New York Times reported.

Now, the conservatives have gained an upper hand in the Supreme Court. Should legal disputes that need to be decided by the Supreme Court erupt between President Trump and Democratic presidential nominee Joe Biden, the Republican Party will have an advantage. This explains Barrett's rushed confirmation.

Whether her confirmation will have an impact on the election depends on what will happen on the Election Day. If either Trump or Biden refuses to accept the election result, they would appeal to the Supreme Court to decide who the president is.

The court now has a 6-3 conservative majority. Once it's up to the Supreme Court to decide the presidency, it will be very beneficial to the Republican Party. Trump's confirmation of the nomination of the judge before the presidential election at such a sensitive moment could be seen as a victory for him and his party.

Many US politicians are seeking political interests by manipulating judicial power. This reflects the intensity of political struggles in the US, the severity of division and the irreconcilable partisan contradictions. This is a manifestation of deepening and worsening political divisions in the US.

Battles between the two parties are expected to become fiercer. This trend mirrors the division in US society. Political division is the manifestation of economic, social and value divisions. This would be a tragedy for the US - the wealth gap is widening, Americans find it difficult to stay on the same page on social identity, and tend to be divided in terms of values and ideologies.

US partisan battles are also eroding its democratic system. US democracy seems to have become a vehicle for some politicians to achieve their political ambitions. This kind of politics, to be frank, departs from the foundation of the country. The US is falling.

US justice has become a "foot cloth" for the two parties, and some politicians' political interests. US democracy is a paradox.

The author is professor at the Institute of International Relations of the China Foreign Affairs University.