Russia ties mean India won’t go too far with US 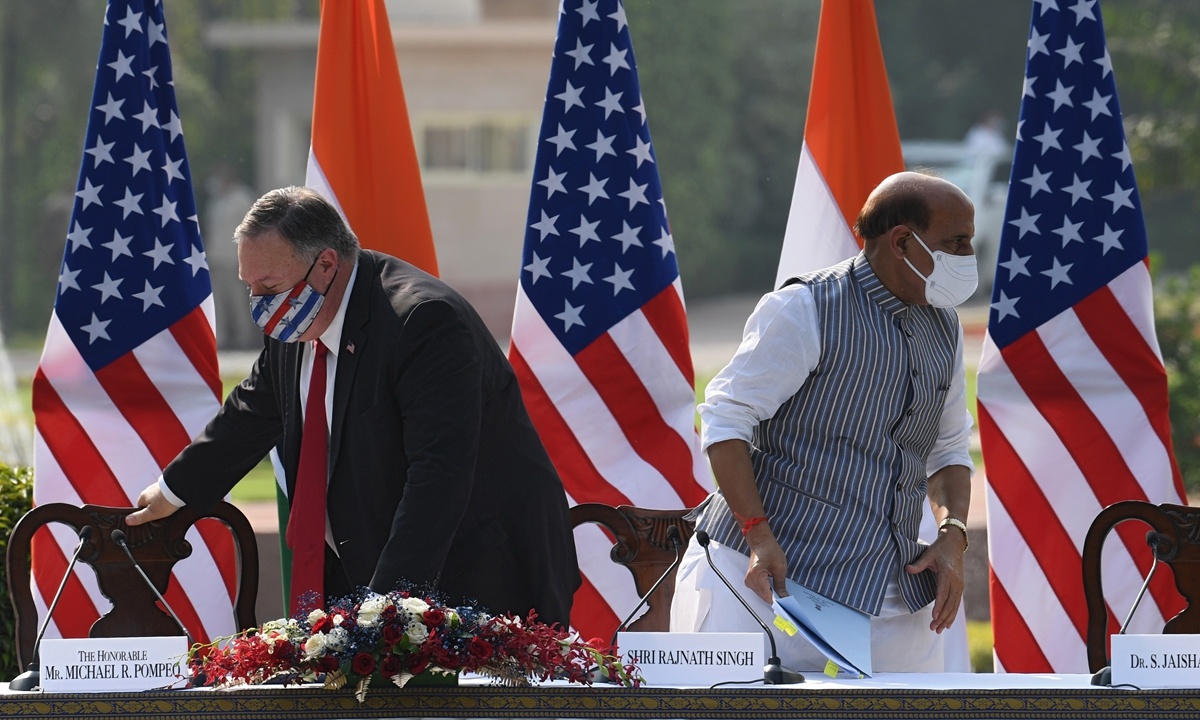 In 2009, US scholar Robert Kaplan called the Indian Ocean the center stage for the 21 century, stressing the growing significance of the region in the world politics. After former US president Barack Obama launched the rebalance to Asia-Pacific strategy, and President Donald Trump made a decision to combine the Pacific and Indian Oceans into Indo-Pacific. It became obvious that the region has truly turned into the center of major countries' competition. How this competition will unfold will determine the stability and security for the region and beyond.

On the eve of the US-India 2+2 Ministerial Dialogue, US Deputy Secretary of State Biegun stated, "We have seen the conditions emerge for an organic and deeper partnership - not an alliance on the postwar model, but a fundamental alignment along shared security and geopolitical goals, shared interests, and shared values." In concrete terms according to Biegun, "The United States has already begun some of these efforts, including increased foreign military sales and intelligence sharing with India. But there is more that we can do, including strengthening India's ability to defend itself and by promoting interoperability among our militaries through regular exercises and exchanges, common defense platforms, and co-development."

What goals are the current US administration pursuing to plan by holding the 2+2 meeting between US Secretary of State Mike Pompeo, Indian Minister of External Affairs Subrahmanyam Jaishankar, and their defense counterparts? Looking at official reports coming from Washington DC, the meeting is aimed at fostering security in the region as the US perceives it. In fact, the US design has two objectives. The first one is to turn India into its ally on a bilateral basis by a strategic partnership. Despite Biegun's statements and a lot of speculation about the US and India strategic partnership, it is premature to speak about their alliance.

According to some assessments, this partnership is not at the same level of cooperation as other US regional allies. Besides, the US strides to beef up operational cohesion with its allies and partners runs counter to India's intention to keep away from this mode of relations. India prefers to preserve its strategic autonomy. Both countries may conduct military exercises. Washington can make an emphasis on operational cohesion while New Delhi looks at them as an opportunity to build trust with foreign partners trying to counteract with many, but building cohesion with none. The second objective is to promote the Quad, an informal security grouping comprising the US, India, Japan and Australia by integrating India more closely into it.

Here it comes to US strategic goals. The US government regards both US-India bilateral partnership and the Quad as a main tool aimed at China. This partnership is supposed to be used as a kind of regional deterrence initiative against China. It is the US endeavor to contain China by trying to limit Chinese activities in the Indo-Pacific region at a minimum. It seeks to push it out of the region by disrupting the China-proposed Belt and Road Initiative on the other end of the spectrum.

The second US strategic goal is to drive a wedge between Russia and India. India is an important country for Russia. Twenty years ago while paying a state visit to that country, President Putin signed a declaration of strategic partnership with India. In 2018, the Russian-Indian trade turnover reached more than $11 billion. Washington is now putting pressure for technical military cooperation, which is moving ahead. In 2019, India purchased Russian military equipment and armament of $14.5 billion. Both countries also signed contracts to supply Russian anti-aircraft systems S-400, naval ships, and massive amounts of ammunition. There is also a huge joint project between Russia and India - the construction of the nuclear power station of Kudankulam.

Thus, India benefits from long-term cooperation with Russia and will hardly agree to wrap it up even under the US pressure. While bringing India closer, Washington will try to persuade New Delhi to withdraw from all international formats like BRICS and SCO (Shanghai Cooperation Organization). However, it is unlikely that the partnership within Quad can replace them. So, I do believe that India will not move that far to cause a crisis in Russian-Indian relations. It will do its best to balance its drift toward the US by maintaining positive political, economic and security agendas with Russia.

At the same time, all sides should realize that the current US strategy is likely to backfire and will cause tension in the region. As suggested, it is advisable to work out such modus operandi that would comprise crisis management, fair competition and inter-complementary cooperation. If one tries to rely on force alone as the top priority in policymaking, it will be appropriate to remember that the law of using an instrument says that when the only tool you have in your toolbox is a hammer, all other problems start looking like nails.

The author is Vice-Rector of Research, Moscow-based Diplomatic Academy.