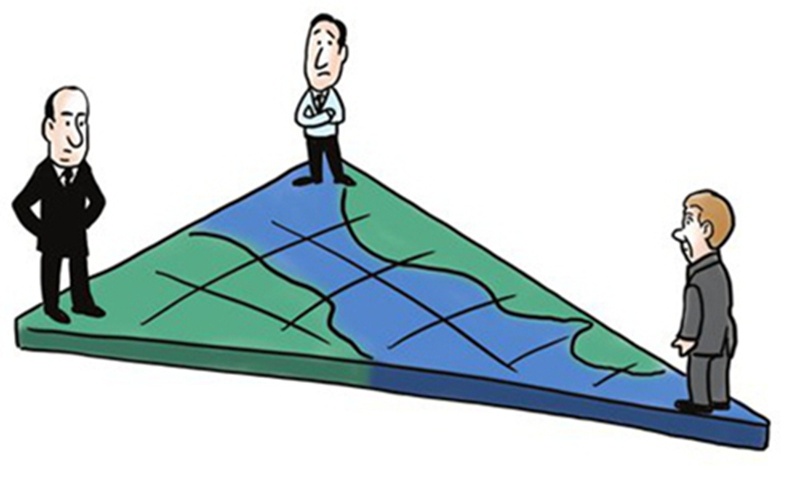 On September 19, Russian Ambassador to the US Anatoly Antonov said in an interview with the Japanese publication Nikkei Asia Review that Russia will not join a US coalition against China or others. This is not the first time that Moscow has rejected an anti-China coalition.

As early as in 2016 when Donald Trump was elected US president, he extended an olive branch to Russia in a bid to improve US-Russia ties. Then Trump lobbied US allies to launch an overall suppression campaign against China. With this, the US has tried every possible means to seduce Moscow to form a comprehensive anti-China posture.

Even though the Cold War ended more than 30 years ago, viewing the global order through a Cold War-lens has become an important tradition of US diplomacy. Previous US presidents understood the world from a zero-sum point of view - even when globalization and global governance have profoundly changed the logic of world patterns.

Washington's moves to seduce Moscow to contain China is not unprecedented or beyond the realm of possibility. In 2018, former US secretary of state Henry Kissinger, a realist who developed triangular diplomacy between the US, China and the former Soviet Union, suggested to Trump that Washington work with Moscow to contain a rising China.

Although the US views both China and Russia as competitors, it treats the two differently. This difference lies in Washington's perceptions of possible threats the two may or may not pose.

The US believes a steadily rising China poses long-term, strategic and comprehensive challenges. It views Russia as only a short-term problem related to regional and security matters. Such understandings constitute the basis of the US courtship of Russia to contain China.

Regardless of when the US invited Russia to return to G7, or allured Russia with the extension of the New START, Moscow has been cool in taking part in Washington's anti-China coalition. Russia clearly understands that the US and its allies are always on high alert for non-Western major powers - namely China and Russia. Even if Washington tries to pull Moscow into its orbit to suppress China, the US needs Russia only temporarily. It will not accept or endorse Russia. When the US does not need Russia any more, it will kick it out without any mercy.

Therefore, Russian leaders will not join the US for such short-sighted interests. Russian academics and public opinion also suggest Moscow keep a watchful eye on Washington's offer.

With the concerted efforts of both Chinese and Russian leaders, China-Russia relations are at historic heights. With the US trying to form an anti-China alliance with the Western world, a healthy and steady China-Russia relationship is critical. In case China-US relations come to an extreme point, solid diplomacy with Russia is key for China to avoid isolation and ensure strategic security on its western and northern borders.

China-Russia relations show strategic firmness as the US intends to drive a wedge between the two. Since the 2014 Ukraine crisis, Western academic circles labeled China-Russia relations as a matter of expediency to counter the US. They predicted that problems would emerge as external pressure changed.

However, the failure of the US in doing so is strong proof that China-Russia relations are anything but expedient. The steady development of bilateral ties result from both internal and external factors. Each is at a critical juncture of national development, and they face tough tasks of rejuvenation. The simultaneous process of China's modernization and urbanization and Russia's re-industrialization is the internal driving force of pragmatic cooperation between the two countries.

On the world stage, China and Russia have joined hands to counter US hegemony, and to maintain international order and rules. Currently, internal and external factors have not changed, instead they have been reinforced.

China should realize that Moscow's support of Beijing is a result of its understanding of the future world. Russia is a truly global power. Its diplomatic strategy serves its status and interests. If its power gradually wanes, Russia will only have a few options. Russia does not want to be a puppet of other major powers. Nor does it want to become a secondary country. Therefore, Russia always promotes a multipolar world as its diplomatic strategy.

Recently, Russian elites have reached a consensus that China-US confrontation does not suit Russian interests. On this basis, Russia is trying to avoid the situation of a bipolar confrontation - hence it promotes open and multilateral international rules. As the China-US competition becomes the new normal, Russia's choice of not joining any coalition meets Russia's needs at the moment.

The author is a postdoctoral researcher from the Centre for Russian Studies, East China Normal University.