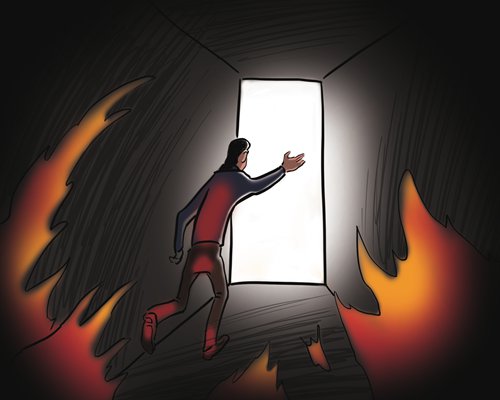 I sometimes shock my students when I tell them they have it easy when they take China's notoriously difficult college entrance exam. Then I explain that they took their exam in warm summer weather, while I took my college exam at the University of Alaska in December 1975 when the temperature was -50 C. The beautiful land of Alaska has shaped all its inhabitants from the original natives to those in the present day. In the Alaskan winter, exposed skin can freeze in minutes so outdoor workers guard each other by watching for signs of frostbite. Before survival suits were required by law, if a fishing boat sank, the fishermen would be dead in minutes because of the extremely cold water. The survival suits which provide a way of escape have saved hundreds of lives since the laws were changed to require them. The first people to inhabit the land, the native American Indians, Eskimos and Aleuts have learned to depend on and protect each other. Native American culture is well known for looking after strangers. In traditional Alaska culture of the pioneer gold rush days, it was OK to take food from an empty cabin if you were in need. People depend on each other to survive in this harsh, unforgiving land. Let me share some of the safety wisdom I have learned in 60 years of my life. This wisdom may help save lives in China. I am an experienced engineer, but I doubt much of my engineering wisdom would be of use to most of you. However, what I learned as a professional firefighter can be useful. I spent five summers as a forest firefighter from 1977-81 to work my way through college. We had a good boss who trained us well and kept us safe. Mel always emphasized safety. He knew the dangers. Every summer in the US, there are about 30,000 forest firefighters and 10-20 firefighter deaths. This statistic makes forest firefighting one of the most dangerous jobs in the US with about one in 2,000 firefighters dying every fire season. According to the US National Bureau of Labor Statistics, this is similar to the deadly occupations of fishing and aircraft flying, but not as dangerous as the deadliest job of logger. Our boss Mel always taught us to "keep an open way of escape at all times!" Sadly, many people have died in the US because greedy ignorant plant owners or landlords did not give those under their responsibility a way of escape. In North Carolina in 1991, 25 people were killed in a chicken plant fire due to locked fire doors. The plant owner received a 20-year prison sentence. The company was slapped with the largest safety fine in the history of North Carolina. This accident came about because of indiscretion. If a company wants to control theft, door alarms that sound if a door is opened made by Safety Technology International are available from Amazon for $82.93. For the sake of spending $100, workers perished and left behind grieving spouses, orphans and parents. It is tragic when heroic firefighters perish serving people despite their superb skill, caution and training. Regrettably they had no way of escape. This happened to firefighter Cory Iverson on December 14 in California fighting the Thomas fire. He leaves behind a pregnant widow and a two-year-old daughter. These heroes know the dangers and willingly take them for the good to the nation. This month in Oakland California, two landlords are on trial for the deaths of 36 tenants in the Ghost Ship Fire of December 2, 2016. One defendant is accused of blocking a fire exit. For workers or tenants to perish because owners robbed them of a way of escape to save money is not heroic. The defendant's attorney who is accused of blocking a fire exit asked he be released without bail, but the judge set bail at $750,000. In Alaska's gold rush, it was OK to take food from a cabin if you were in need, but if you did not soon restock the cabin you were stealing a way of escape, and that was treated as murder. Robbing anyone of a way of escape is not heroic. It is murder!