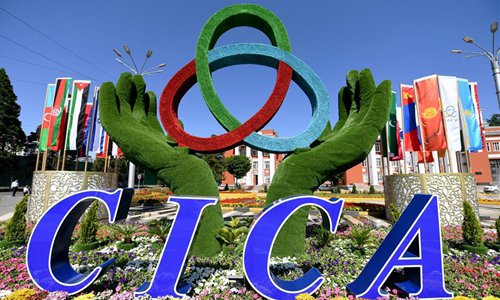 The logo of the fifth summit of the Conference on Interaction and Confidence Building Measures in Asia (CICA) is seen in Tajikistan's capital Dushanbe, June 13, 2019. (Photo: Xinhua)

Editor's note: The author, Chen Ping, is deputy executive editor of the Global Times. This is an excerpt from remarks he made about "The Role of the Media in Building the 'Belt and Road' and the Asian Community of Shared Future" at the Media Roundtable of the Third Conference of the CICA Non-Governmental Forum held in Chongqing on December 19, 2019.

The declaration of the fifth summit of the Conference on Interaction and Confidence-Building Measures in Asia (CICA), entitled "Shared Vision for a Secure and More Prosperous CICA Region," explored the possibility of establishing appropriate events for sectors including the media community to expand the scope of people-to-people contact, and the CICA Non-Governmental Forum is just such an event where media outlets from different CICA state members have a wonderful opportunity to share views with each other.

Against the backdrop of "a world undergoing profound changes unseen in a century," Asian countries share mutual interests, are confronted with common challenges and face common tasks, so it is important to promote mutual understanding and mutual trust among regional players.

With 27 member states and 13 observers, the CICA is a pan-Asian multilateral cooperation mechanism that seeks to promote peace, security and interaction in Asia, so it constitutes a perfect platform for promoting multilateralism in an age when unilateralism is threatening to change and even to destroy the current world order.

Multilateral organizations such as the United Nations and the World Trade Organization are also under threat. There is huge room for the Asian media to make its due contribution in promoting multilateralism and opposing trade protectionism.

It is well known that in today's world, the Western media has more influence than the media in developing Asian countries. This is a fact that we have to acknowledge, and this is also a reality that the Asian media should make joint efforts to challenge and change. We need to get our voices heard in the world.

The world community continues to face numerous traditional and non-traditional challenges and threats. To be specific, some Asian countries are constantly confronted with terrorism, extremism and separatism.

While governments of these countries are making great efforts to fight these elements, some members of the Western media have shown double standards in their coverage of such events. A recent example that illustrated the Western media's hypocritical double standards came when CGTN (China Global Television Network) aired, in early December, an English-language documentary entitled "Fighting Terrorism in Xinjiang," which exposed the trauma that violent terrorism and religious extremism have brought in the Xinjiang Uyghur Autonomous Region.

To the great surprise of the Chinese audience, the Western media was suspiciously silent about it. They simply turned a blind eye to the documentary, ignoring its existence. I cannot help but ask: Does the Western media really care about Xinjiang? Or do they think some of the scenes of attacks committed by terrorists against innocent people in Xinjiang are too bloody and cruel to be broadcast?

I am sure China is not the only victim of such unfair practices by the Western media. If the government of a country is disliked by the West, especially by the US, it will surely fall victim to the double standards of the Western media. I propose that the Asian media should make joint efforts to expose and denounce such unprofessional and unethical practices.

The Asian media should explore and report the measures that each country has taken in accordance with its own domestic situation to meet non-traditional security challenges as well as the results these measures have achieved.

We have to keep in mind that the media, no matter what its political tendency or affiliation is, does not have the right to intervene, directly or indirectly, in the internal affairs of any other state. Also, we should oppose any attempts by the media to try to instigate unrest or riots in any other country.

The declaration of the fifth CICA summit also called for the promotion of inclusive and sustainable development and economic cooperation. I think this is where the China-proposed Belt and Road Initiative (BRI) would fit, as economic development is part of the effort to build a community with a shared future for Asia.

Almost six years after Chinese President Xi Jinping put forward the proposals to build the Silk Road Economic Belt and the 21st Century Maritime Silk Road, the BRI is not just a vision anymore. It has seen fruitful outcomes in many parts of the world where countries have enthusiastically participated.

Some key foreign guests talked about the great importance that their countries have attached to the BRI when they made speeches at the plenary session of the third conference of the CICA Non-Governmental Forum. This demonstrates the popularity that the BRI has enjoyed across Asia.

The China-Pakistan Economic Corridor (CPEC) should also be mentioned if we are talking about the BRI. With the CPEC having made outstanding progress in infrastructure, energy and employment, it should be regarded as a model for other countries when they decide how to integrate the BRI with their own development strategies.

The media should pay great attention to the development of the BRI in various parts of the world in general and Asia in particular. We should explore the benefits that the BRI has brought to different participating countries.

In the context of the CICA, media outlets from different member states should have more extensive communications and frequent exchanges of views and ideas. The concept of "seeing is believing" is true for the sharp eyes and ears of news reporters. Events such as this roundtable should be organized regularly. This will definitely boost mutual understanding and trust among CICA member states.