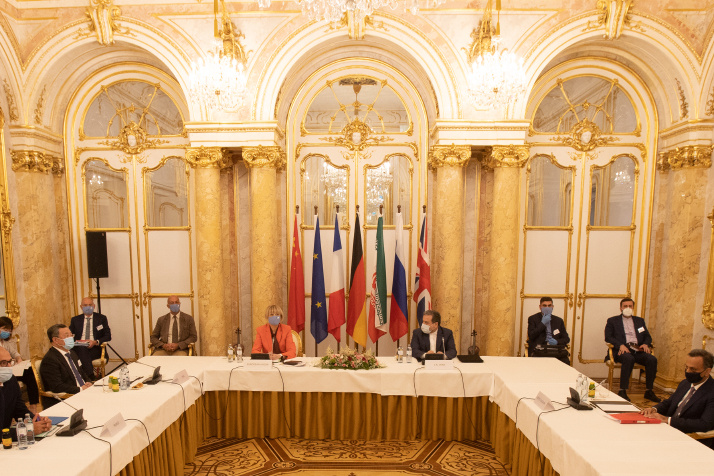 A meeting of the Joint Comprehensive Plan of Action Joint Commission reaffirms its commitment to preserving and implementing the Iran nuclear deal in Vienna, Austria, on September 1. (Photo: Xinhua)

As the 75th anniversary of the UN, perhaps this is as good a time as any to discuss the United States' role in the organization—particularly in light of President Donald Trump and his administration's efforts to de-emphasize multilateral relations and global governance mechanisms.

The US played a pivotal part in the founding of the UN in 1945. Much of the world's rules-based structure for international law, regional security arrangements, trade agreements, immigration rules and cultural exchanges has been profoundly influenced by the US

For decades, the US has provided one of the largest financial contributions to the UN's overall budget. It hosts the UN headquarters in New York City and sits as a permanent member of the UN Security Council.

While they have had many disagreements over the past decades, until 2017 the US supported both the UN's multilateralism and its role in enhancing the rules-based international order. Much of the United States' involvement in the UN was because it often served to support US power interests.

However, since 2017, under the Trump administration, the US has chosen to take a different approach to both multilateralism and the rules-based international order. By abandoning decades of US foreign policy consensus, the Trump administration has taken a less predictable, more business-like transactional approach to bilateral and multilateral relations, and advocates neo-mercantilism, nationalism, and less interest in broad alliances.

Therefore, it should come as little surprise that Trump sees the United States' relationship with the UN as, at best, a net negative—one that he believes impedes US interests. In fact, Trump himself described this approach during a speech to the UN General Assembly in 2018 as "principled realism."

The current US approach to the UN might best be characterized as a form of aggressive neglect, highlighted by funding cuts to the UN Secretariat, a number of UN agencies including the UN Educational, Scientific and Cultural Organization and the World Health Organization (WHO), and less interest in engagement. This is in line with Trump's approach to foreign policy that is more nationalistic and confrontational. The result is that his isolationist "America First" diplomacy is diminishing US influence at the UN, most recently symbolized by formal letters from 13 of the 15 Security Council members who opposed the Trump administration's attempts to extend the economic embargo on Iran.

Rather than taking a more globalist and multilateral approach to foreign relations like China or its closest allies, the US is increasingly using the UN—particularly the Security Council—as a venue to air political grievances and make threats. One only has to recall then US Ambassador Nikki Haley's threat to other nations who failed to support the US decision to move its embassy in Israel from Tel Aviv to Jerusalem.

Since taking office, Trump has pushed for major funding cuts by the US to UN agencies. Such cuts will likely force the UN to undergo significant structural changes that may or may not all be to the United States' liking. While Trump has pressed for both monetary cuts and withdrawal from a number of UN agencies and commissions, it should be noted that US support of the UN has not been a high policy priority for quite some time now.

Currently, the US has opted out of major international agreements and owes the UN over $1 billion in outstanding dues. In early July, the Trump administration gave a one-year notice to the UN officially advising their intention to withdraw the US from WHO. It's notable that this action by Trump is in violation of a US law that requires approval of the Congress.

But because any withdrawal cannot take effect until July 2021, if Joe Biden becomes the new US president, he could simply revoke the withdrawal upon taking office.

The Trump administration's withdrawal from UN organizations and its monetary obligations reflects an increasing exhaustion and cynicism with global affairs among a significant minority of the American public, fueled by years of war and now by a pandemic. While it often opposes multilateralism and cooperation with international organizations, it's ironic that American unilateralism could actually impede needed reforms within the UN and its various agencies. If the US wants to improve the UN's accountability, the Trump administration would do well to use its substantial financial clout to press for reform.

Currently, an important question for both the UN and the global community is if the shift to less global engagement during the Trump administration is an aberration or the new normal for US foreign policy. As a permanent member of the UN Security Council, it serves US interests to be a fully engaged member on multilateral issues. Unfortunately, the last four years have seen a reversal of decades of US engagement with the UN and the world.

Trump's recent speech to the UN underscored his pursuit of disengagement, confrontation, and scapegoating. Rather than being globally focused, Trump appeared far more interested in scoring some domestic political points during a highly contentious presidential election by focusing the bulk of his speech attacking China, describing COVID-19 as the "China virus"—a term widely considered to be xenophobic. He even accused China of allowing people to leave China in the early stages of the outbreak in order to infect the world while shutting down domestic travel.

Contrast Trump's bombastic railing against China with President Xi Jinping's speech, which pressed for enhanced global governance, multilateralism, and cooperation. Unlike Trump's speech that exaggerated his achievements and blamed China for a host of tendentious offenses, Xi urged a global effort to defeat COVID-19, rejected any attempt to politicize the pandemic, and called on WHO to take a leading role in the fight. The contrast between the two leaders and the state of current China-US relations and US global engagement couldn't have been clearer.

The UN's effectiveness as a global organization depends on the leadership of the US, China and the world's other great powers. Consistent American engagement with the rest of the world, including the UN, is essentially needed. The United States' involvement in the world body advances America's strategic goals while also promoting global economic prosperity and humanitarianism.

The author is Professor of political science and chair of the Department of Political Science and Geography at the University of Texas at San Antonio.