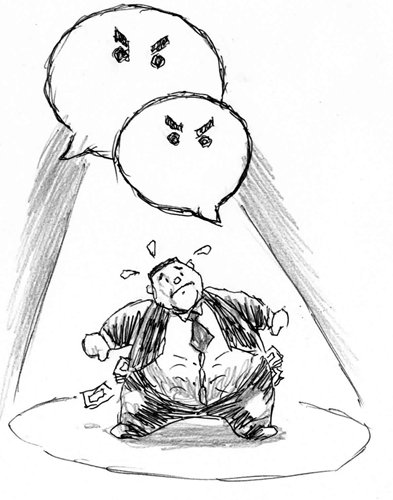 Just days after "Secretary Yan" went viral online, the discipline inspection and supervision committees of Sichuan Province announced a probe of the big shot - Yan Chunfeng, deputy secretary of the municipal Party committee in Guang'an, a city of Sichuan.

"Secretary Yan" found himself in the vortex of public opinion after a woman used his name to intimidate a teacher at her daughter's kindergarten. According to the Wechat screenshots, the woman demanded the teacher apologize for complaining about the naughty child. "I will ask the leaders of your institution to explain what you meant by uttering such words for Secretary Yan's daughter," the mother was quoted as saying. She later announced in the chat group that the teacher had been fired. After the incident, it was revealed that "Secretary Yan's" daughter did not have to go through admission tests to get into a famous primary school because of his connections.

Although both the kindergarten and the school denied ties with "Secretary Yan," the episode has touched a raw nerve among ordinary parents, especially because competition for educational resources is intense in China. Ordinary families' anxieties about equal educational opportunities have added to the uproar so much so that netizens across the country joined aggrieved parents to push authorities to investigate Yan and condemn officials who misuse power to seek favors.

"Secretary Yan" reminds people of the catchphrase - "My dad is Li Gang." Li's son, in an attempt to avoid legal trouble, shouted the words at the police after ramming his car into two pedestrians. To his disappointment, his "strong backing" has only made him and his father a target of netizens. Cases of people attempting to take advantage of connections with those in power ending in online opprobrium have been frequent.

Ironically, the officials whose names are used are eventually investigated after being inadvertently caught up in the scandals. In Yan's case, netizens joked that it is Ms Yan whose misadventure led to the anti-corruption investigation of the powerful secretary.

Power is another word for social responsibility. The more powerful an official, the more social responsibility he needs to shoulder. Sadly, some officials, as well as their relatives, often regard power as a medal to bully others and an effective means to instant benefits. They run roughshod over rules and no ordinary citizen dare challenge them.

But in the internet era, a small issue can always snowball and draw nationwide attention. Few corrupt officials can escape probe and punishment after being dragged into scorching online criticism. Pressure of online public opinion is a major reason for local authorities to immediately respond to a scandal. Under internet's oversight, corrupt officials are more likely to be noticed, tracked and investigated. Prying online public opinion can deter officials and those having connections with them from wielding power for personal gains. While the press is called the fourth estate, the internet can be the fifth to keep government in check. This is undeniably a part of societal development.