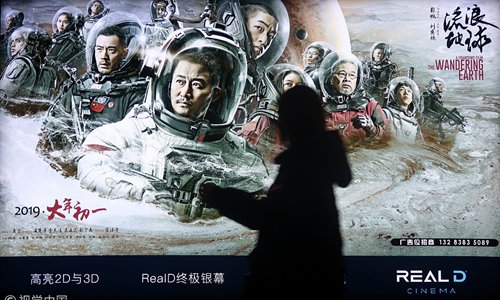 Does this film resonate simply because it is a good sci-fi film made by Chinese? Of course not. It is mainly because the story reflects the common concern of people of different color, belief and nationality in the world. That is: the fate of the Earth. We share a common destiny because we are living in the same global village. The movie has struck a responsive chord in the hearts of its audiences.

American sci-fi filmmakers have a prolonged enthusiasm about the fate of the Earth from the early stage to recent years. From The Day of the Earth Stood Still in the 1950s to Armageddon (1998) and MegaFault (2009), a long list can be made. Of course, the heroes who saved the planet were all Americans without exception. But this time it is Chinese.

Guo Fan, director of The Wandering Earth, once said that a "sci-fi film is a reflection of a nation's comprehensive strength." The Guardian published an article headlined "China challenges Hollywood with own sci-fi blockbuster."

This is in line with how people see today's global affairs. China is making contributions to global development with its own strength and its own way.

Different from the US sci-fi blockbusters which advocate individual heroism, The Wandering Earth proposes China's collective spirit. Take the climax of the movie: When all the plans to save Earth failed and Earth is about to hit Jupiter, many other countries, which had decided to give up, were moved and inspired by a brave Chinese girl. They then chose to salvage Earth from its doom together with Chinese. Such a Chinese blockbuster presents a new appearance of sci-fi and successfully moves audiences of different countries.

Likewise, the key to improving the world's understanding of China is to find an echo in each other's hearts. Today, mankind still faces many international hot issues, such as environmental protection, anti-terrorism and the reconstruction of the world financial order. To solve these problems, we need global participation and cooperation, and China should play a constructive role.

These problems are also common challenges facing China and the US. Both China and the US should take their responsibilities. The two countries are more likely to cooperate on these issues which could be the basis for building mutual trust.