Scientific and technological innovation in China lead to economic restructuring 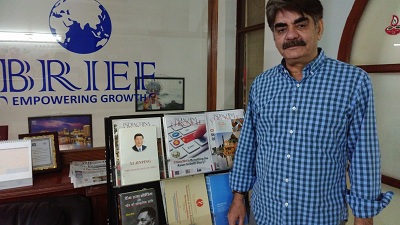 I don't remember how many times I have been to China, and how many cities I have visited in China. Every time I go to China there is a new experience, especially in China's scientific and technological achievements.

Since 2003, I have contributed to friendly cooperation between China and India and have been dubbed the “annual model worker” of diplomacy. I have witnessed the tremendous achievements made by China in science and technology, and the country is making a good case that technological innovation leads the economic restructuring and development. China should be proud of it. It is a good example for other developing countries.

The World Intellectual Property Organization and Cornell University jointly released the 2017 Global Innovation Index Report. China's ranking rose from 25 in 2016 to 22, the only middle-income country to enter the top 25. It shows that the gap between the scientific and technological level in China and the developed countries is gradually narrowing. China, which boasts of epochal inventions in ancient times, has once again demonstrated its ability to change the world with its “new four great inventions”: high-speed railways, electronic payments, shared bicycles and online shopping.

My wallet is no longer in use because I can buy and eat whatever I want simply with a tap on my phone. I use Wechat, and used it for a high-speed railway trip from Shanghai to Hangzhou.

Science and technology is rapidly changing, and China has made a number of innovations that have attracted worldwide attention in aerospace, artificial intelligence, deep-sea exploration and biomedicine in 2017.

I believe the reason for it is not only the result of the accumulation of nearly 40 years of economic experience, but also the visionary and strategic plan of the Chinese government. Science and technology constitute a primary productive force. China firmly grasps this conviction. China's new normal includes seizing the great opportunity of a new round of  the scientific and technological revolution, and provides a powerful impetus for economic restructuring and upgrading.

I am deeply impressed by the Chinese government's policy and investments in technological innovation.—“Made in China 2015,” artificial intelligence, Internet+ and so on. R&D investments will increase to 2.5% of GDP in the 13th Five-Year Plan.

I saw peasants farming with the latest technology in Hunan's rural areas, and was impressed with new types of agricultural machinery, pesticides and soil formulations. In today's society, whoever holds the edge in science and technological innovation can grasp the initiative of transformation and development. With the pressure on resources, energy and  the environment, China's economic and social development is further exacerbated. In addition, the comparative advantages of the Chinese economy are also changing. Demographic dividends have been reduced and the comparative advantages of labor resources have been weakened. Technological innovation is a fundamental solution.

(The author is the Secretary-General at India China Economic and Cultural Council.)