OPINIONS Scrapping NY school test not fair to many

Scrapping NY school test not fair to many 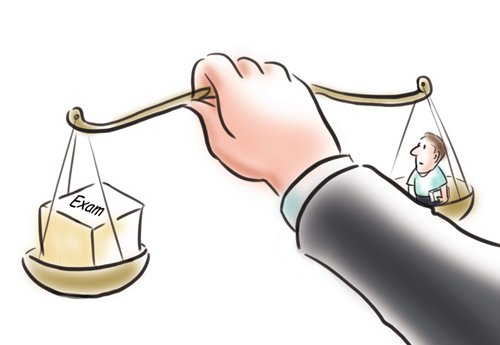 New York Mayor Bill de Blasio finally announced his proposal to end test-based admissions to the city's specialized high schools in early June. These schools, eight altogether, are the top public schools in the city and take in students exclusively based on their scores in the Specialized High School Admissions Test (SHSAT). If the state gives the city the green light, the SHSAT system will be dissolved and these schools will be mandated to take in the top 7 percent from every middle school, based on the students' average academic performance.
By doing so, the mayor aims to offer more opportunities to black and Hispanic children to enter these schools where, at present, half of students come from just 21 of the city's 525 middle schools, thanks to the segregated nature of public schools. The majority of students at these schools are Asian.
The mayor's plan predictably triggered a huge outcry among Asian parents who worry that it would reduce the opportunities for Asians and dilute the quality of specialized high schools. The brouhaha took place at a time millions of students in China were taking gaokao, the college entrance exam that lasts up to three days and could largely define their future. And the coincidence created an interesting juxtaposition on my WeChat account where Chinese parents in China complained about the cruelty their children had to endure to take the high pressure tests and Chinese parents in New York complained that their children may soon be denied the chance to take a similarly tough test.
What adds flavor to the drama is that many Chinese parents in New York came to the US for the sole purpose of winching their children away from the test-oriented education system in China. They wanted to offer them a more relaxed study environment that encourages critical thinking.
It may look ironic that parents who hated tests in their own country became advocates for them in New York. But it is not hard to understand. What these parents want is no different from what the mayor wants: a fair education.
In the mayor's eyes, the current test-based admission policy is completely unfair. Many students who scored enough to make the cut went to cram schools to prepare for the test. The mayor takes this as a sign that the system favors people who are able to afford the cost of prep schools and leaves poor families who cannot do so at a disadvantage. Black and Hispanic students, who make up for 70 percent of the tribe in the city, only provide 10 percent to specialized high schools. The mayor suggests the test has robbed them of the opportunity of getting quality education. So his reform proposal is merely a way of helping the underserved to fight for what they deserve against the elites who steal it.
But what's missing in the equation is the fact that many Asian families are new immigrants for whom a fair education in this country is a rare commodity from the beginning.
As newcomers, they may not be able to afford to live in the districts where the good schools are located. They are also unlikely to be wealthy, but they are likely to save really hard to pay for the cram schools because education is their top priority.
When it comes to college admissions they don't have the background or contacts to make a difference. Colleges do not have to tell students why their applications were rejected, opening the door to dubious factors to play a role - such as a parent being an alumna or a grandparent being a retired dean of the school.
So SHSAT is one of the very few options left for new immigrant students to get a leg up in the system simply by working hard. In a country where many things are pre-decided for them, this is an avenue to a better future that is mostly under their own control.
It is for the same reason that despite attracting ceaseless criticism, gaokao is still in place in China. Despite all its sins, it is still one of the very few systems that allow people in the lower strata of society to climb up the ladder by hard work.
It is not only the Chinese people who believe that tests help maintain fairness rather than harming it. On Sunday, during a protest against the mayor's plan that attracted thousands of participants, I met Marlon Pragnell, a scientist from Barbados researching diabetes. He told me the high school he went to many years ago in Barbados, which was one of the best in the Caribbean island nation, admitted students through a sole test, no matter if your parents were government officials, wealthy tycoons or peasants.
But on the first day of school, the teacher wanted to know how many students didn't have a light at home. For those who were too poor to afford a lamp, the school provided it so they could study at night. "That's what fair education should be like," he said.
As for the mayor's plan, it is to fairness what a McDonald's hamburger is to healthiness. Many parents told me at the protest that a slice or two of tomatoes and lettuce on the meat makes it look like a nutritious meal. But it is not.