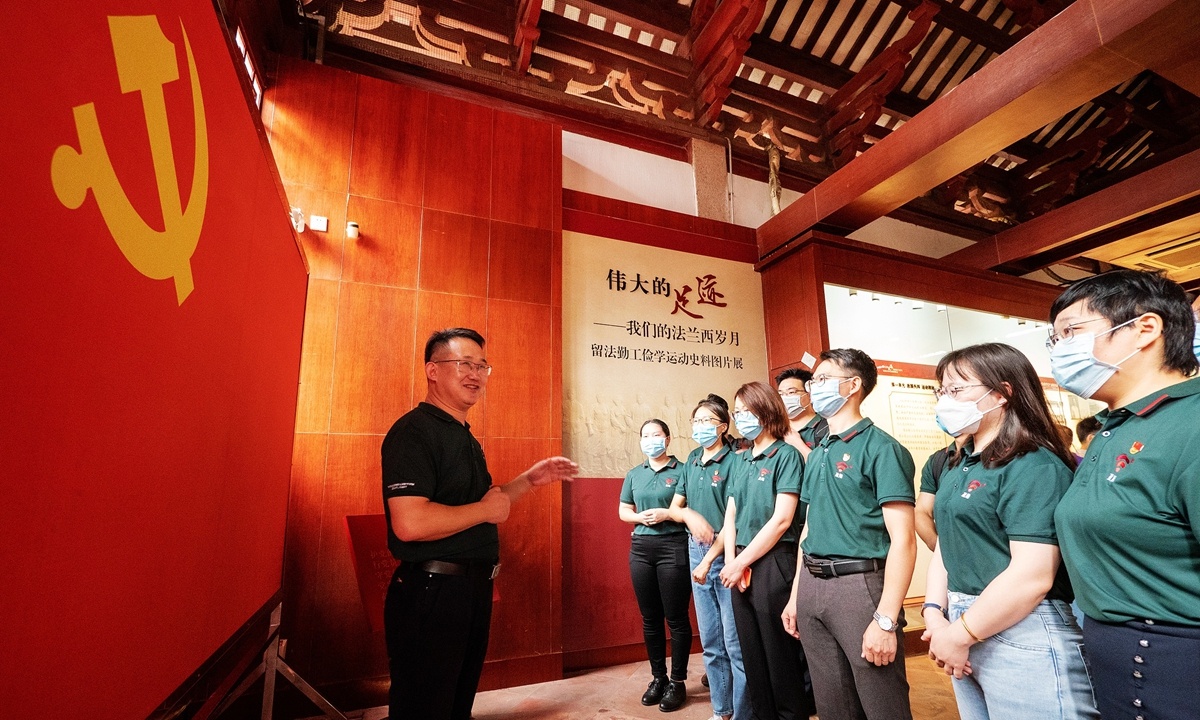 Staff at the Peasant Movement Training Institute review the history of the Communist Party of China on July 1 in Guangzhou, South China's Guangdong Province. (Photo: VCG)

The New York Times report "US Weighs Sweeping Travel Ban on Chinese Communist Party Members" published on Wednesday has set public opinion ablaze in no time. The idea is incredibly absurd. Who in Washington were the first to propose it? Do they understand the Communist Party of China (CPC) and Chinese society? Or were they merely using the proposal to sensationalize the situation? I have decided the time is right to formally introduce the CPC to Americans.

To begin, let's talk about what 93 million Party members means. The scale of the Party is unimaginable to Westerners. 93 million is not just a number. That figure is more than the total population of Germany. According to reports, not only Party members but also their families are likely to face the sanction. If we count only their spouses, children and parents, there would be at least 300 million people - equivalent to the total population of the US. If their parents-in-law, siblings, cousins and families are counted, about half of the Chinese people will be affected. Half of Chinese society has connections to the CPC. Very few Chinese people have neither relatives nor friends who are CPC members.

Let's take a look at who these CPC members are. The CPC has been the ruling party for a long time. Most officials in local authorities across the country are Party members. But senior and middle-to-high level officials are only a tiny part of the CPC. Most CPC members live and work among ordinary Chinese people. They themselves are ordinary Chinese people. They are usually active forces in all walks of life. If the CPC is a big tree, these people are the roots which deeply penetrate the soil of Chinese society.

The CPC is not a political party that has emerged under a Western political ecology. It is substantially different to Western-style parties in scale, goals, operating mechanism and the role it plays in society. The CPC is not a typical "party" in the English vocabulary. No English word can really describe it.

The CPC can be described from different perspectives. For instance, the CPC is the skeleton of China's vast society, the backbone of the mobilization and operation systems of the whole country. The CPC creates the selection and training mechanisms for advanced figures in Chinese society.

The CPC is the product of Marxism applied to China's distinct national conditions. Relying solely on the historical, social and political experiences of the West, one cannot truly understand the CPC which has, together with the people, brought China to its status of the world's second-largest economy.

Most CPC members join the Party when they are young, with dreams, enthusiasm, collective spirits, higher working competence and other qualities praised by others. They often volunteer for more difficult work and devote themselves more than others because that is an obligation of Party members.

In the face of emergency situations, CPC members should rush to the front. That is the common expectation and requirement of all Party members and Chinese society. "CPC members shall be the vanguard" has once again become not only a widely used slogan but also a common reality on the frontline of the fight against the coronavirus. Many medical personnel - including doctor Li Wenliang who was infected and sacrificed his life in the fight against the virus - are members of the Party.

The large-scale CPC has its own complexities. A small number of members have been found guilty of corruption, which has triggered the Party's anti-corruption campaign. It is due to the effective anti-corruption campaign - active since the 18th National Congress of the CPC - that the Party has further won the support and trust of Chinese people. It is also the reason that anti-China forces have been disappointed. The CPC, together with the Chinese people, is striving to change the destiny of the Chinese nation for the better. The Party is leading the Chinese people while integrating completely into the country. Its fundamental nature will never change. The hard work and responsibilities of the CPC have greatly boosted China's strength and its people's living standards. The Chinese people are aware of that.

Advocating for the separation of the CPC from the Chinese people for targeted attacks is the fantasy and delusion of a few US elites. It is as hypocritical and arrogant as attacking a man's heart and nervous system yet claiming to be beneficial to his whole body. Opposing all CPC members is undoubtedly opposing all Chinese people. It is an attempt to hit the weight-bearing part of Chinese society's development and progress. Political parties under the Western system are political tools seeking interests for certain groups. The CPC's responsibility, however, is to seek interests for all Chinese people. That is also a strong source of the CPC's strength.

The current US administration openly antagonizes the CPC. It is sowing hatred between the two countries and the two peoples, trying to make the struggle between the two sides a fundamental confrontation rather than a fight for interests. What does such confrontation mean for the 21st Century and for people who want peace? China and the US are the two largest comprehensive powers worldwide. The two are both nuclear powers and have great strategic mobilization powers. By repeatedly creating tension, is the current US administration trying to force the two countries toward an all-out strategic confrontation? Is it going to bury global peace and tranquility?

The US is deeply mired in the COVID-19 pandemic, and it is already the most seriously impacted country worldwide. Its situation may not improve for a long time to come. For the next one or two years at least, few Chinese people are likely to be willing to travel to the US except for in special circumstances. The US' planned sanctions on CPC members would be meaningless for a long period of time. What's irritating is that the US has been unscrupulously and publicly declaring policies attacking the CPC, and has crossed the bottom line of diplomacy and upset the basic civility of international relations in the 21st Century. The US is openly pushing the world toward a new Cold War, and that is a crime against humanity. History is not blind. The US is poisoning the 21st Century and it is bound to face retribution.