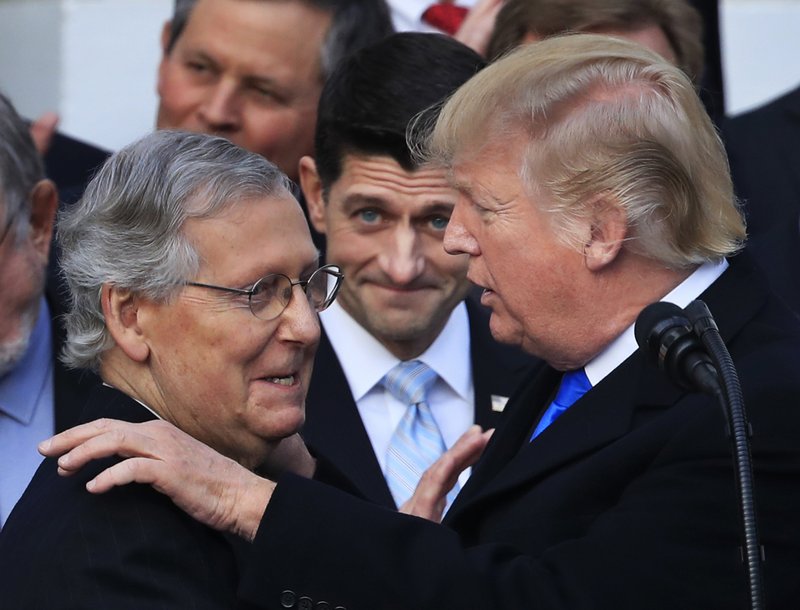 The sequel to President Donald Trump’s first year in office is opening with the lead player hamstrung by a government shutdown and hunkering down amid investigations, crises and political unease.

After 365 days in the Oval Office, Trump has found that his drive to deliver quickly on campaign promises has yielded to the sobering reality of governing — and the prospect of an electoral rebuke in November. Administration aides, outside allies and Republicans on Capitol Hill see the Trump White House continuing to face many of the same challenges it wrestled with last year, with fresh plot twists to boot.

Special counsel Robert Mueller’s probe into Russian interference in the 2016 election keeps moving ever closer to the Oval Office. The government shutdown highlights the legislative challenges that persist even with Republicans controlling the White House and both the House and Senate, and makes clear the administration’s need to more carefully target its political capital on specific agenda items. And the fall elections are shaping up as a referendum on Trump’s tenure.

“In the second year, you no longer are one-dimensional,” said Ari Fleischer, press secretary when George W. Bush was president. “There’s an inevitable pivot that every administration makes, and that is to recognize that it’s no longer about future events and promises, it’s now about defending and promoting last year’s accomplishments.”

No administration comes into office fully ready for the task of leading the government, and Trump’s team has taken disruption to a new extreme. Republicans outside the White House are now hoping the Trump administration will be more politically savvy. But the 71-year old president has proved set in his ways, trusting his instincts over the advice of his aides, and there is no reason to expect that won’t continue.

Yet Trump has been changed by the experiences of the past year, according to aides and outside advisers, most of whom spoke on condition of anonymity because they were not authorized to publicly discuss internal dynamics. The president has grown more fearful of leaks. His inner circle of friends is smaller, most recently with the banishment of former chief strategist Steve Bannon. This smaller group of informal advisers has seen Trump favor those who tell him what he likes to hear, according to several people who talk to him regularly. And that, combined with chief of staff John Kelly’s determination not to manage the president, is furthering the Trump’s impulsive streak.

Personnel changes are afoot to streamline the West Wing political and legislative affairs teams in preparation for the November elections, and Trump and Vice President Mike Pence are preparing aggressive campaign and fundraising schedules.

Despite a booming economy, Trump’s approval rating is at historic lows for a first-year president, weighed down by partisan controversy and his own divisive actions and statements. The fall contests represent a make-or-break moment for Trump and could influence his pursuit of a second term, an effort that will begin in earnest next year.

GOP lawmakers frame the importance of keeping control of the House and Senate in self-serving terms for Trump: Democratic control would grant subpoena power to the president’s fiercest critics.

Wary of potentially losing the Senate, the White House plans to continue its aggressive push to appoint conservative judges before Congress breaks for campaign season.

For all the legislative ambition of the first year, Trump’s second stands to be a more muted affair.

Immigration, the sticking point in the current shutdown, stands as the most promising option after the president provoked a crisis by setting up the March 5 expiration of protections for roughly 700,000 young immigrants brought illegally to the U.S. as children. He’s hoping to use it as leverage to pass his hard-line immigration priorities.

Before the State of the Union address Jan. 30, the White House has been preparing much-delayed policy proposals on infrastructure and welfare, but little progress is anticipated as lawmakers have begun turning their focus to their own re-elections.

White House officials said Trump is looking forward to spending much of the year promoting his achievements on judicial nominations, deregulation and passage of the tax overhaul.

“If year one is about tallying campaign promises,” said White House spokesman Hogan Gidley, “in year two, we can talk about results.”

Administration officials pointed to Trump’s speech Thursday in Pennsylvania, where he highlighted the benefits of his tax plan, as an example of his efforts to sell his first year to the public.

Overseas, many of the same challenges remain. The nuclear threat from North Korea occupies an ever-growing focus inside the West Wing. And while the Islamic State group’s foothold in Iraq and Syria has been diminished, Trump is facing new questions about the role of U.S. troops in the region.