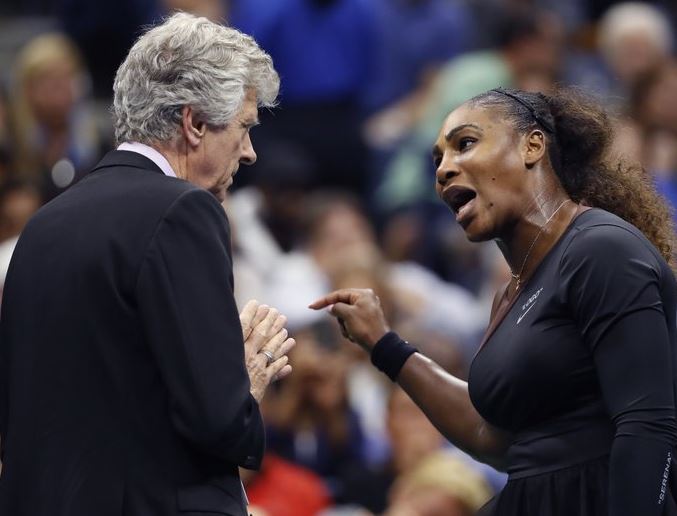 Serena Williams, right, talks with referee Brian Earley during the women’s final of the US Open tennis tournament against Naomi Osaka, of Japan, Saturday, Sept. 8, 2018, in New York. (Photo: AP)

The 2018 US Open has been a major topic of discussion as of late, but unfortunately not the right reasons. Instead of celebrating 20-year-old Naomi Osaka becoming the first Japanese player to win a Grand Slam title, the news is centering on Serena Williams’ cries of racism and sexism against the tournament’s judges for her loss. In fact, it should be noted that Williams’ behavior was abhorrent and shameful and not the attitude of a role model.

To sum up the controversy, Williams was first given a warning when the umpire caught her coach giving her illegal coaching during the match. Then, after losing a point to Osaka, Williams smashed her tennis racket on the ground; resulting in another violation where Williams unleashed a verbal tirade against the umpire for holding her accountable.

Her third violation was due to her ongoing berating of the umpire – calling him a “thief,” a “liar” and also promising that he would never be an umpire at a future US Open tournament.

Williams lost the match and was fined $17,000 for her violations, yet many people have sided with her claims of sexism and racism – despite her opponent being a female and a person of color (being Japanese and Haitian).

It should also be noted that she was given fair warning – her “illegal coaching” warning was just that: a warning. Furthermore, Williams’ coach, Patrick Mouratoglou, fully admitted to the “illegal coaching” and that he got caught, pure and simple. While Mouratoglou then told ESPN “all coaches are coaching throughout the match.”

Williams and her coach were caught breaking the rules of the US Open and were given a fair warning. Williams should have just taken the warning and went on with the game, yet she continued to berate the umpire every chance she got – which was her biggest sin of the match. Williams chose to behave poorly and bad conduct is cause for point violations at the US Open.

She cried, demanded an apology and even told the umpire “I have a daughter and I stand for what’s right for her” instead of just accepting that she was at fault.

This might be her most shameful act from the tournament, because she’s using her role as a mother as a defense as to why she cannot be at fault. Then she goes on to say that other male tennis players violate the rules, once again deflecting the fact that she was exhibiting poor conduct. 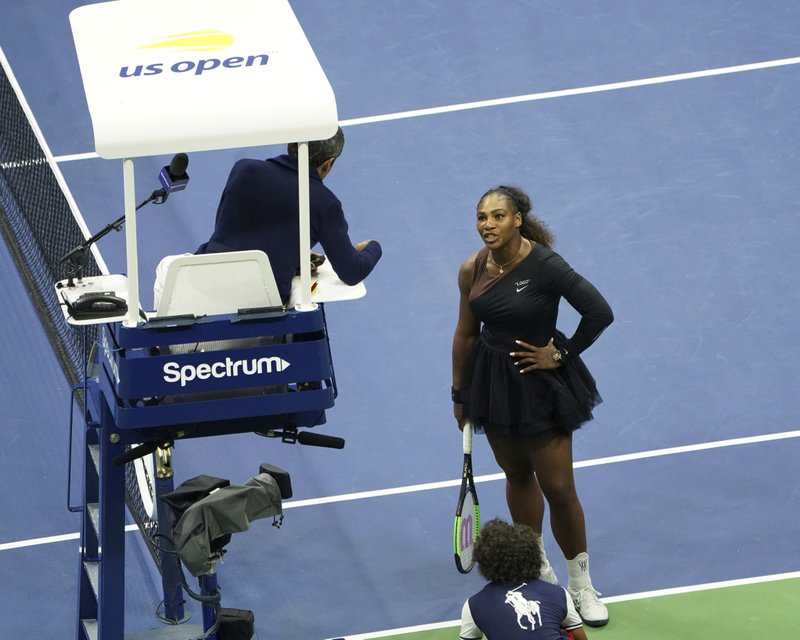 Serena Williams argues with the chair umpire during a match against Naomi Osaka, of Japan, during the women’s finals of the US Open tennis tournament at the USTA Billie Jean King National Tennis Center, Saturday, Sept. 8, 2018, in New York. (Photo: AP)

After the match, commenters immediately started making comparisons to her and John McEnroe – a legendary tennis hothead who has been long labeled a “superbrat” by the Daily Express for his awful temper. Williams’ fans and commenters are claiming that her violations are being blown up because she’s a woman and black.

Yet, that comparison does not hold up since McEnroe has been held accountable for his actions over the years and he’s been disqualified from the US Open and the Australian Open. He’s been called out dozens of times and his career suffered for his outbursts.

Williams’ fans also say that McEnroe has yelled worse obscenities at umpires before, but they seem to have short memories because Williams has said more vulgar and threatening words to tennis tournament employees.

McEnroe is famous for calling a Wimbledon umpire an “incompetent fool” and screaming “you cannot be serious” for what he thought was a bad call in 1981. McEnroe was fined $6,000 for his outburst (adjusted for inflation is $17,379 according to the US Department of Labor).

According to ESPN, the Bleacher Report, and other media, McEnroe accrued $69,500 in fines during the 80s and 90s, which amounts to some $150,400 when adjusted for inflation. However, this does not cover the amount of money he lost by being ejected at various tournaments for his bad behavior.

Williams? At the 2009 US Open semi-finals, she yelled at a lineswoman who called her on a violation during a serve. According to the New York Times, Williams was fined $10,000 on-site, then $82,500 after a two-year probation.

The point is that bad behavior should not be permitted in sports regardless of race or gender, especially if Williams considers herself a role model to the black community and women. Both McEnroe and Williams have been hurt by controversy but claiming that McEnroe got away with worse because he’s a man is a shallow argument because we’ve seen that McEnroe been held accountable over the years.

The bottom line that Williams’ fans are denying is that Williams got outplayed, pure and simple. She was never going to win her match against Osaka because she was too far behind to begin with.

This is where Williams’ attitude pattern comes into play – she’s a sore loser. If Williams is winning, she’s jovial, smiling, and friendly. When she’s losing: she starts blaming umpires and other referees for her mistakes. She’s proved this during her biggest loses at various tournaments in 2004, 2009, and 2001 and anyone can see the proof on YouTube and ESPN.

During her latest match, Williams said “I don’t cheat to win, I’d rather lose” – but it seems like she’d rather throw blame around instead of accepting her loss. Instead of displaying good sports conduct, Williams typically loses her composure and makes the matches become centered on her ego.

Williams has been a professional tennis star since 1995, and that has earned her some $88 million, according to wtatennis.com, yet she’s never been graceful when losing a match. There’s no doubt that she’s an amazing tennis player, but that does not excuse her attitude and that definitely does not merit claims of racism and sexism.

Basically, Williams needs to hold herself to a higher standard because she’s no longer just an athlete – she’s a role model for millions of people around the world. She’s achieved a legendary status, but her attitude at the US Open is a major setback for her image.

She needs to learn from legendary sports role models like Muhammed Ali, Usain Bolt, Maria Sharapova, Neymar, and Billie Jean King – who have been lauded for their philanthropic work. On the other hand, if Williams keeps her bad attitude and mudslinging, she might end up disgraced like Tiger Woods or Mike Tyson.

As a role model, Williams needs to continuously improve herself and instead of using the same excuses for bad behavior, she should learn from her mistakes and get better. As it stands now, Williams is one of the most recognizable athletes in the world and her attitude will have a profound effect on her fans. So if she really wants to make a difference and be a force for good in the world, she’ll drop her bad attitude and focus on being a good sport.