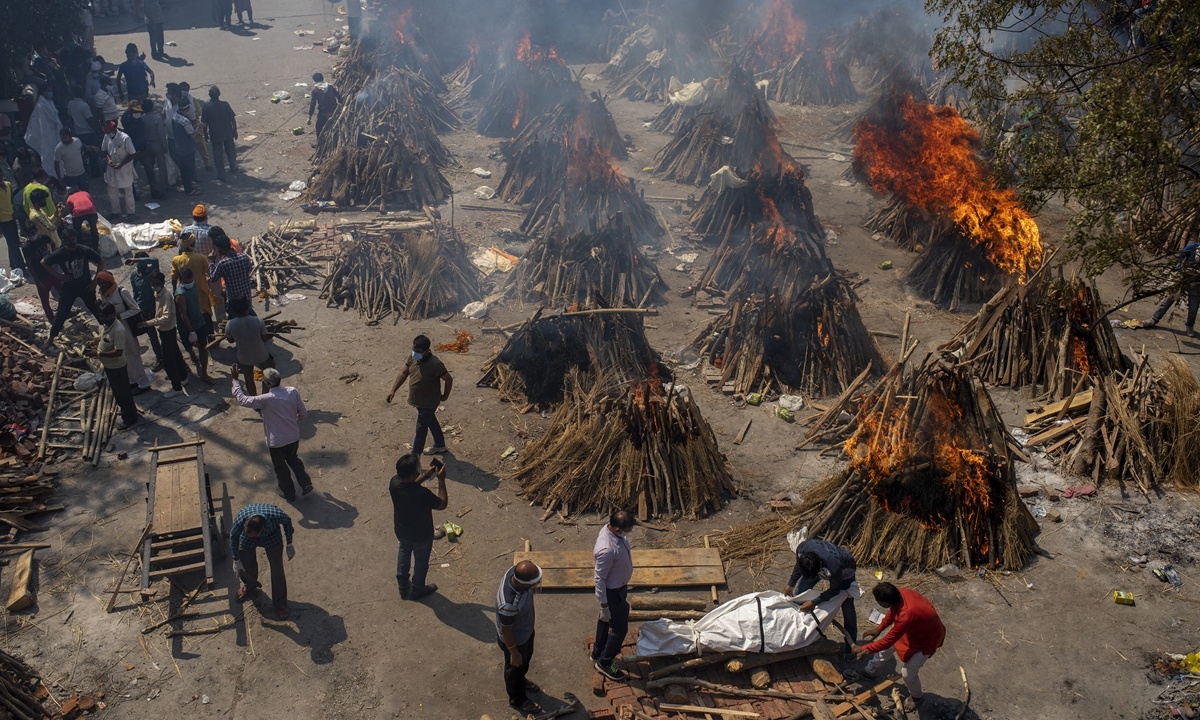 Multiple funeral pyres of COVID-19 victims burn at a site converted for mass cremations in New Delhi, India on Saturday. Indian authorities are scrambling to get medical oxygen to hospitals when the country reported a new global daily record of more than 346,000 infections for a third straight day. Photo: AP

The attitude of the other three Quad countries to the raging COVID-19 epidemic in India has shocked and disappointed both Indians and the world. This was even after the Biden administration announced it would ship 60 million doses of vaccine to other countries including India.

At the first summit of Quad leaders, they stated that, "Quad partners are working collaboratively to achieve expanded manufacturing of safe and effective COVID-19 vaccines at facilities in India." What they considered at that time was India's commercial value and manufacturing capability. When India's vaccine production is affected by the epidemic, it is natural for the other three countries - the US, Japan and Australia - to fear an obligatory relationship with India or bear the consequences of India's losses.

Unfortunately, Washington does not uphold the concept of a community with shared future for mankind. But it fears that the epidemic in India could eventually bring disasters to the US itself. So it first declined to help India, then eventually chose to export vaccines under great international pressure.

US President Joe Biden has shown his determination to reverse Trumpism. However, when India encounters a disaster, he seems to be more "Trumpist" than Donald Trump, stressing more on "America First" than his predecessor did. This will undoubtedly bring great loss to the diplomatic capital of the US.

The response of the Quad countries toward India's request for help should sound the alarm bell for India. But whether or not there will be any real changes in India-US relations depends on if the scars left by India's epidemic are deep enough. India-US relationship mainly depends on geopolitical needs. If India achieves obvious results with the subsequent support of the US this time, the impact on India-US relations will be relatively limited.

India will also reassess the so-called alliance system of the US after this strong wave. It is not impossible for India to withdraw from the Quad mechanism if the US only offers lip service, or takes advantage of India's situation to sell vaccines or raw materials for vaccines to India. Of course, India's own interests will be a decisive factor in this regard. But at least, India should not rush to follow US' lead on all issues.

India is an important pillar in the Quad mechanism - simply because of its anti-China attitude. Due to border frictions between China and India last year, the US has calculated that India is genuinely anti-China. Therefore, it will continue to draw India in. This has also led to India's dilemma in the face of China's goodwill now.

A fissure has already appeared on the trust within the Quad countries. If US' assistance to India does not have much of an effect, then Washington will hit a wall when it tries to draw New Delhi into future campaigns.

So far, the world has only seen a terrible Quad. It should be noted that the purpose of this mechanism is not to combat COVID-19 in the first place; it is a strategic system of containment against China in the Pacific Ocean and Indian Ocean regions.

The US is moving close to India because of its need to contain China. When Washington and Beijing start to reengage in interaction and improve their relations, the strategic significance of India to the US will dissipate accordingly.

The author is a research fellow at the Shanghai Institute for International Studies. opinion@globaltimes.com.cn