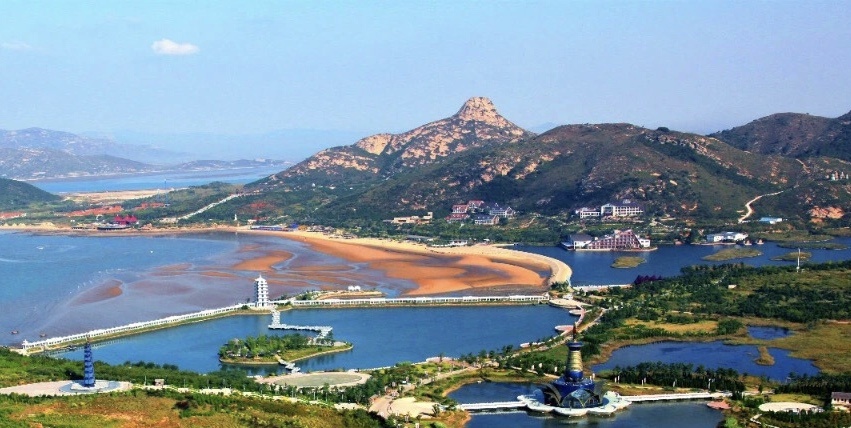 Slogans about maternal love can be seen everywhere in Rushan, a city known as the holy place of maternal love for its deep regional, historical and cultural origin. Maternal love is not only the connection that binds Rushan city, there's also a spiritual bond that unites all Rushan people.

According to Rushan Records, the city in Eastern China's Shandong province is named after Darushan Mountain located in the south of its territory. The mountain, with an elevation of 216.6 meters, is high and rises straight into the sky. The main peak is cone-shaped, and its round crest is just like a bosom, so the mountain is also called the Mother Mountain by local people.

There is an old legend about Darushan Mountain. A long time ago, a group of sea monsters was carrying out all kinds of evil acts. They often killed fishermen, and the local people suffered a lot at their hands. Luckily, two goddesses killed those monsters in order to provide a peaceful and comfortable environment for local people to live and work in. However, the sea set off a huge wave when the monster's body fell into the water. The two goddesses quickly lay on the seashore to block the seawater with their bodies to protect the local people from being submerged by the sea. When one of the goddesses lay down, she found a group of starving children, and she immediately decided to breastfeed them. However, she was unable to regain strength and turned into a mountain, which is today's Darushan Mountain.

Besides the geographical factor and the legend, its precious and touching cultural history is also a pivotal reason for Rushan taking maternal love as its cultural label. As an old revolutionary base in Jiaodong area in Eastern Shandong, Rushan has a glorious revolutionary tradition and abundant red cultural resources.

During the War of Resistance against Japanese Aggression, the main force of the Eighth Route Army and the Party and government agencies were forced to move frequently due to the enemy's raids and blockades. Therefore, some women officials were forced to leave their children to the local people for support. In July 1942, the Jiaodong Committee of the Communist Party of China decided to set up a nursery in Muhai County (now Rushan City) and selected nursing mothers to feed the offspring of the Party, government and army officials and martyrs who fought for independence, freedom and liberation. Under extremely hard conditions, more than 300 nursing mothers and childcare workers raised 1,223 children, and none of them were injured or killed.

With maternal love beyond the kinship, the nursing mothers in Jiaodong area did their utmost to keep the revolutionary fire blazing, and let the power of revolution continue to grow, which showed the spirit of boundless love and selfless dedication.

By promoting the culture of maternal love, Rushan city combines the geographical indication of Darushan Mountain with the humanistic history of benevolence to establish the city's spiritual identity, which has greatly enhanced the cohesion of all Rushan people from the cultural perspective.