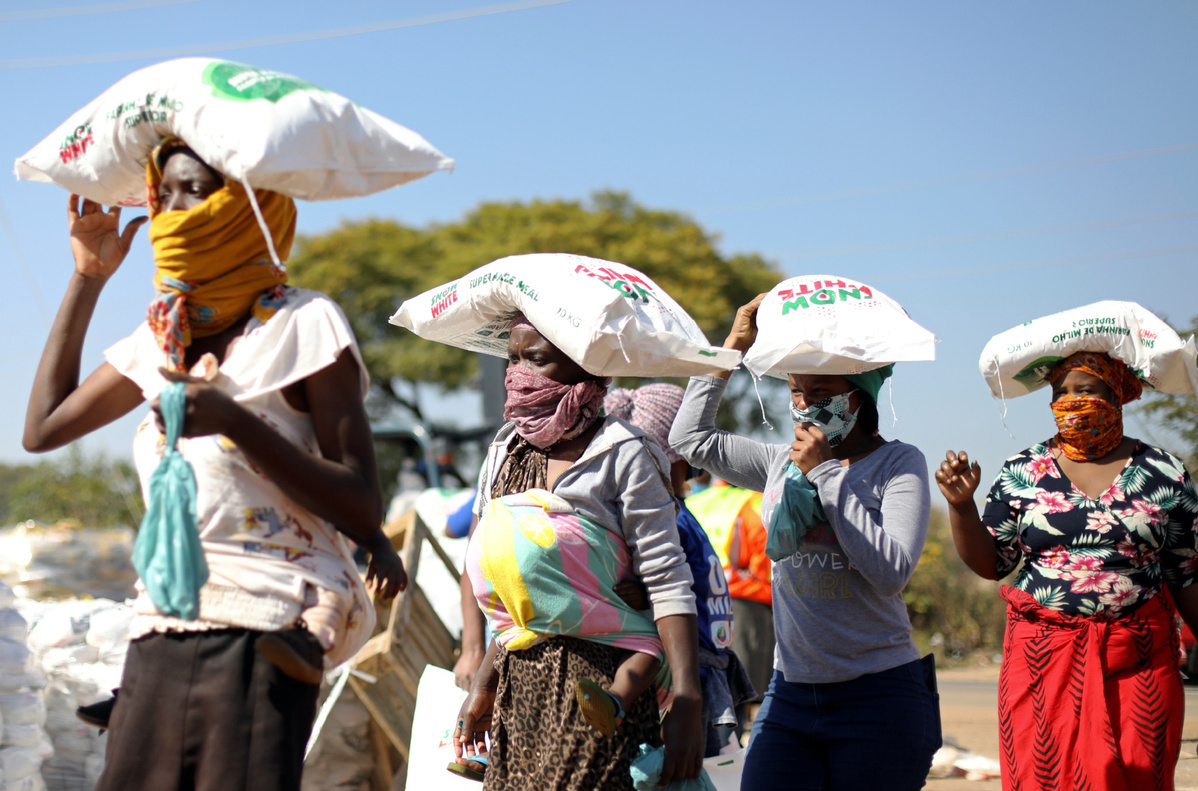 Women carry bags of maize meal on their heads as people queue to receive food aid amid the spread of the coronavirus disease (COVID-19) outbreak near Laudium suburb in Pretoria, South Africa, May 20, 2020. (Photo: Agencies)

The heads of four United Nations agencies have issued a warning of the growing number of vulnerable people, particularly children, suffering from malnutrition and even hunger worldwide.

In South Asia, sub-Saharan Africa and Latin America, poor families are struggling to get access to food because of the pandemic, they wrote in a white paper published in the medical journal The Lancet and released by the Food and Agriculture Organization on Tuesday.

They called on countries to take action to protect children from food supply problems caused by the pandemic and prevent the pandemic having "an inter-generational legacy of hunger and malnutrition".

It is estimated that 10,000 more young children will likely die each month as households are cut off from markets and villages are isolated from food and medical aid, they warned.

As an increasing number of countries restrict exports of grain, those countries that rely on imports of grain for food will be unable to obtain enough food for their people.

That explains why the UN estimates that more than 550,000 additional children each month are suffering from wasting — malnutrition that manifests in spindly limbs and distended bellies — with the total numbers up 6.7 million from last year's total of 47 million.

To be exact, the restrictions on people's movement for the prevention and control of the spread of the coronavirus have resulted in stagnation in economic development. As a result, poor people in underdeveloped countries who live from hand to mouth have not had any income to buy food. Some have had to eat whatever wild plants and other things within their reach.

As early as April, David Beasley, head of the World Food Program, warned that the effects of the novel coronavirus outbreak on the global economy could cause global famines "of biblical proportions" this year. There are different stages of what is known as food insecurity; famine is officially declared when, along with other measures, 30 percent of the population suffers from wasting. If the pandemic is not controlled worldwide soon and lasts into next year, let alone the year after next, the size of the global population affected by food insecurity will only increase.

It is imperative major countries realize how urgent and important it is to make concerted efforts to bring the virus under control and revive the global economy. It is not just cooperation to develop vaccines as well as effective medicines to treat those infected with the virus that is required, but capital and the political will to avoid an escalation of the pandemic from a health crisis to a food crisis.

Global solidarity matters if a world food crisis is to be avoided whose effects would outlast the duration of the pandemic.