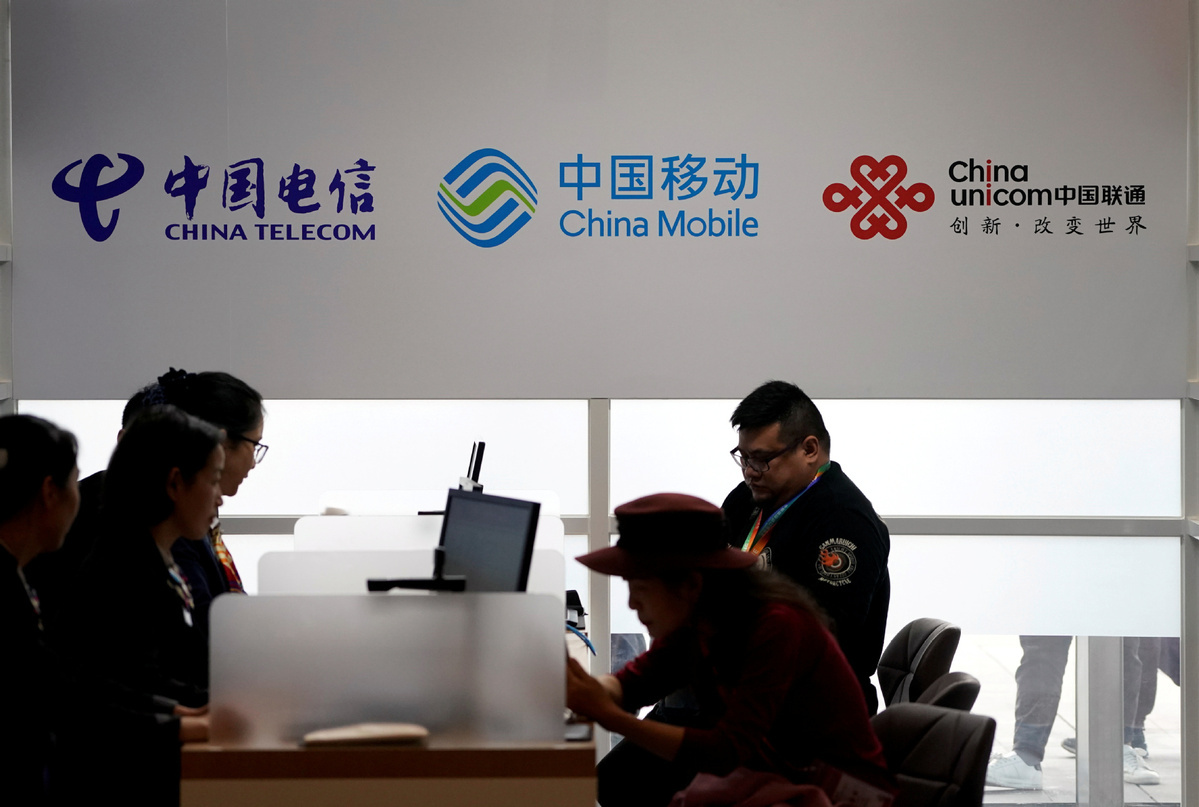 Signs of China Telecom, China Mobile and China Unicom are seen during the China International Import Expo (CIIE) at the National Exhibition and Convention Center in Shanghai, on Nov 5, 2018. (Photo: Agencies)

The New York Stock Exchange announced on Thursday that it is starting the process of delisting securities of three Chinese telecom companies — China Mobile, China Telecom and China Unicom — citing compliance with an executive order issued by US President Donald Trump in November barring US investments in Chinese companies that Washington claims are controlled by the Chinese military.

Although it will directly hurt some US investors' interests and tarnish the image of the US stock market, the move will not inflict substantial injuries on the three companies given the small presence they have on the NYSE.

The order listed 35 companies that it alleges China is using to exploit US investment capital to fund military and intelligence services. That is nonsense, but it continues the defining theme of the outgoing administration through its final days.

Hong Kong will be the principal beneficiary, as the move reinforces that Hong Kong is the optimal choice for Chinese companies seeking to access capital from overseas through the stock market.

But there are other potential beneficiaries of the move.

The two runoff elections in Georgia on Tuesday, where incumbent Republicans David Perdue and Kelly Loeffler are facing Democrats Jon Ossoff and Raphael Warnock, will decide which party will control the Senate.

Compared with the much closer competition between Perdue and Ossoff, Loeffler, a staunch Trump supporter and China hawk, is seen as needing a boost to turn the tide in her duel with Warnock.

It so happens, that Loeffler is the wife of NYSE Chairman Jeffrey Sprecher, and, reportedly, following a private all-Senate briefing about the looming COVID-19 pandemic on Jan 24, long before most of the US public were aware of it, Loeffler executed 29 transactions valued between $1.28 million and $3.1 million just before the market crashed.

Sprecher allowing Chinese companies access to US capital is also considered a black mark against Loeffler in her Senate race with Warnock.

So the NYSE's high-profile announcement of the delisting decision shortly before the runoffs may be viewed as a desperate bid to muffle her critics and to try to turn the situation in favor of the Republican candidate.

No wonder Sprecher who had the privilege to "cut the chives" early feels no qualms about shutting the door upon the Chinese businesses, which only serves to raise the bar for common US investors to share the dividends of the fast developing Chinese companies and the continuous growth of the world's second-largest economy.

In other words, the move "abusing national security and using state power to crack down on Chinese enterprises", as the Chinese Commerce Ministry described it, is a vivid example of how partisan politics and the narrow ends of a few politicians can hijack public interests.

The incoming Joe Biden administration can seek to mend the fences with China, which has already signaled it is ready and willing to improve relations. But it is going to have its work cut out trying to remove the deep stains on the image of the US in the eyes of the international community because of such out-of-hand actions by the incumbent administration.